'You're never more than six feet away from a rat' they say, though apparently (according to Dr Google), 164 ft is a better estimate.  But in Thackley, that West Yorkshire village between Bradford, Idle and Shipley, 6 ft actually is about right as their prize micropub, the Black Rat,  takes pride of place on the main L**ds Road drag going through the centre.


The highlight of my only previous trip to Thackley was rescuing an escaped twild in the pub car park because his parents were too busy arguing and 'Nanna' was 'all out of puff and wheezy'.  Not that I was viewed as the hero I should've been, but never mind!

Tonight, I set off from L**ds bus station (playing relaxing classical music to stop the locals getting too carried away about Champions League football in two seasons) on the number 60 feeling proper old skool, one of my first ever midweek BRAPA trips in May 2014 was to Greengates on this same route.  No one was too weird (sadly) as you'd expect from a bus journey in West Yorkshire, but we crawled in the Friday evening traffic and it took a good 80 minutes to get there.  I was getting increasingly anxious as I'd read the maximum pub capacity was 15 people.  What if I got there and a big burly bouncer said "oi BRAPA, you ain't on t'list, you ain't comin' in!"?

Amusingly, the always unhelpful two word description on Google Maps for this particular pub was "outdoor seating" which surely is some kind of deliberate joke. 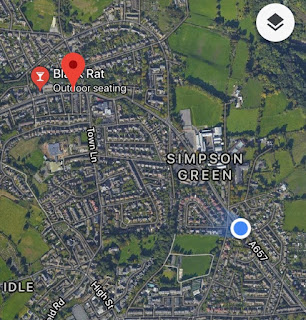 But kind of not, as it came into view:

A quick headcount indicated I was the 22nd person inside this former florists, which probably never had 22 people all in at once apart from when Princess Di or Nanna died or summat.  The blokes sat by the door immediately said 'ow do' and as I fought my way to the bar, people smiled and moved for me.  So already, my spirits were lifted.  The beers seemed to be from Ellesmere Port for some peculiar reason apart from some dodgy looking Black Rat house beer which was probably great, but I couldn't help thinking I'd breakout in buboes if I tried it.  Weirdest moment came as landlady put my pint on the bar after I'd paid and the old bloke quickly swiped it away!  "Excuse me, that's MY pint!" I protested to which he laughed through a gummy toothless mouth and said something indecipherable and reluctantly handed it back.  Funny thing was, there didn't seem to be a similar nearby pint he'd mistaken it for!  No, he just turned back to his group looking sheepish.  None of them looked surprised.  Very odd.  Where to stand then?  Didn't fancy the outdoor bench as the snow was falling steadily again now, so I secreted myself between door and everyone's coats on pegs, meaning I had a nice soft back rest too!  A group of 4 oldies came in.  "I AM THE GUARDIAN OF THE COATS" I randomly blurted out to one of the ladies for no reason (I'd had the phrase in my head for a few minutes).  This beer must've been good!  "And what an important job that is" she replied in what might've been so most patronising pub reply of 2019 so far, but she meant well.  Everyone was lovely in here.  I did another headcount.  27.  Someone had snuck in without me realising.  Then, another old dude became the 28th.  His glasses steamed up on entry.  "Where's everyone gone?!" he jokingly said, fake groping at the air.  I laughed heartily.  No one was really that funny in here, but the ridiculous 28 happy people squashed in here was like clowns in a mini.  Kinda great, kinda fucking terrifying.  And I enjoyed my half hour spent here.


Even on the bus towards Shipley, for where I took the train to L**ds, people thought they were amusing.  A group of blokes were talking about one of their mates who reckoned he'd pull tonight.  "The only bird he'd pull is in bloody Kentucky Fried Chicken!"  "Haha, good one!" replied his mates, but apart from the fact a chicken is a bird, I didn't really think it worked.  Still, I'm the Guardian of the Coats so what do I know?

As I chugged back to York via L**ds with the few brave souls not letting a bit of snow ruin their Friday, I went through a new station I'd not seen before called Appley Bridge or something so am hoping that could be useful for future West Yorks trips cos let's face it, I really hate buses.

A nice steady evening then, for I have a big day in Cambs & London tomorrow.