With rubbish bags strewn across the pavements, it was the kind of main street I half expected to find Phil Mitchell sat down eating a Fray Bentos pie in a doorway.  We were south of Lincoln centre, where we had one more pub to do before heading back to civilisation. This was to be pub three of the day.  The Ritz Wetherspoons wasn't a good example of what this wondrous chain has to offer, the Golden Eagle was a marked improvement.  So hopes were high after recent positive micro experiences in areas like East Yorkshire and Merseyside. 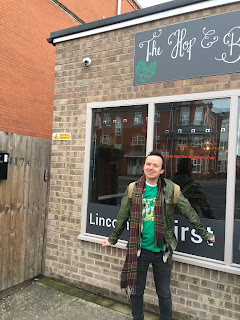 The Scotsman behind the bar was the one who made the most effort with us today, semi-interested in BRAPA and what pubs we'd been to and were going to, even if he was no fan of the pub we'd just come from!  Sadly, the ale I picked was dreadful (it was called Devil's Return from Avoiding Line so there was a clue in there!) and even though Christine had a taste and went "yuk", I still got a pint cos I thought it might improve.  Dad said his Nethergate was good for balance (not his balance, you know what I mean!)  The place itself was the blueprint Hillier style micro, very Dr Phil's., a tiny cold square loveless building eschewing all aspects of the good ole' fashioned gammon flavoured boozer, which made the barman's watching of loud films on an electronic device all the more surprising, as I've been in similar micros which would ban such behaviour.  Luckily, we had a crossword and Ben came up with a game where we all had to bet on five football teams to get away wins today, I did rubbish, I think Dad won, and I sulked for ages when Ben said Dunfermline would win at Falkirk.   The loo had an interesting sticky door (not as sinister as it might sound) but that was all, and after  another brief nice chat with our Scottish hero about my next two pubs and their staff who he was friends with, I made a mental note and headed back into the cold Lincoln air. 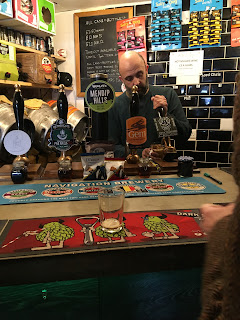 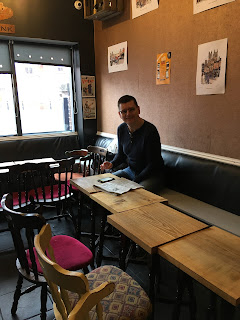 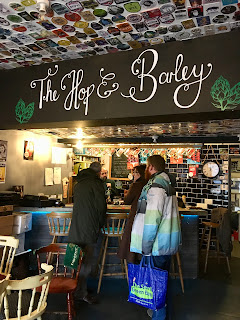 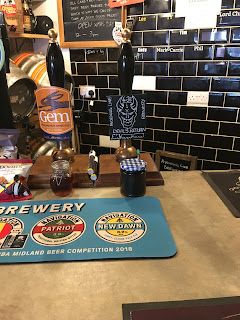 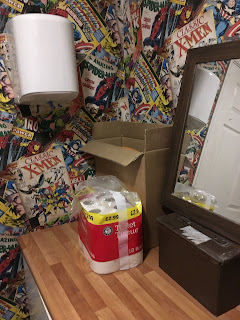 Lincoln is a funny place for many reasons, not least the fact the level crossing is kind of actually in the city centre, never known owt else like it, so shoppers and pubbers have to wait patiently (well you can go up and over but probably not worth your while) to get from A to B.

I had a pre-pub mission actually, I needed to buy some charcoal pens for New Year's Eve for letting the new year in / first footing (don't ask) so I found an art shop called Blue Bird or something, pretended I was any other kind of artist than a piss artist, wowed the shop assistant with my dynamic approach to buying charcoal pens, and popped round the corner for pub four .....

I walked through the door, where there stood Dad, who presented me with a pint of something dark and glorious, and the others indicated it was choc-a-bloc downstairs so we ascended to the upper level.  I was a bit mindful I'd been dilly dallying like a dithering idiot so apologised to the barman shinning up the stairs behind me for slowing him down.  "Don't rush mate, I need to slow down, need a bit of a breather!" he replied, who'd work in a busy central pub like this, gruelling?!  The upstairs was a warped wonky tudor-tastic gem, well I say gem, it didn't have the atmosphere of a Thomas Wolsey Ipswich, a Black Swan York or a Board Inn Bridlington, but more a Tobie Norris Stamford with folk who showed a bit more initiative.  And if that isn't an obscure pub description, I don't know what is.  Still, quite a trendy crowd, menu with a bespoke cheeseboard printed in newspaper form.  Warm and comfy on the low flung settees, but hard to really love or totally feel  part of, I just kind of felt like I was passing through a building where it just so happened some people ordered beer and sat down!

'Twas time for my final GBG tick, and we headed just around the corner to a surprisingly quieter location on the side street.  I could tell straight away I was going to enjoy this one. 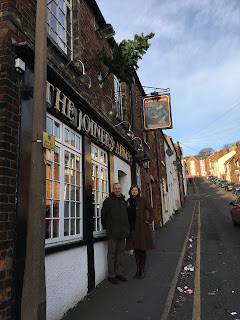 It was still only 2:15pm when we got inside, so you could see the great progress we'd been making.  The pub had a bit of a Golden Eagle vibe to it, the old Lincoln City programmes, a degree or two colder than you might like, but I tell ya Titanic Plum Porter can make up for a lot?  And what was this?  Two framed football shirts belonging to one time Hull City legend (for 3 games til his 'step over' was found out by opposing defences) Cameron Stewart?  Even the locals weren't sure.  I got told the landlord should know, can't remember if I ever asked him.  In this weeks edition of "I thought I'd seen everything in a pub but I've never seen that", a bloke kept wheeling a wheelbarrow around the pub whistling, he seemed to be doing some work in the room next to us but it all carried on in perfect harmony with the pub operating as normal, there was something beautiful about it.  In the true spirit of this celebratory time of year, Christine had a game for us and soon we were blowing up inflatable reindeer antlers and throwing hoops at Tom's head.  Like you do.  Next thing I know, the Sky Sports screen opposite tells me Hull City are winning at L**ds.  Whaaaaat?  Luckily, if I was too happy, Ben brought me back down to earth with tales of Falkirk doom and also asked "what ya gonna do when they stop publishing the paper edition of the GBG cos it WILL happen?"  Of course, Dad then chimed in with one of his "You need to adapt BRAPA, it is unmanageable, and it'll kill you!" statements.  They may be right, I may be crazy (as punk legend Billy Joel once sang) but do you see Duncan or Martin adapting their challenge?  Does the bloke from Brighton with the wife adapt his challenge?  Does the man from Halifax who lives in Winsford cos he hates life adapt his challenge?  COURSE THEY DON'T!  They crack on regardless.  And as if to illustrate why it is all worthwhile, Twitter legend LincolnPubMan tracked me down in here to say hi and have a pint with us.  Lovely chap, great to meet him, soon Hull City were 2-0 up, Dad went for a train, me and Tom caught him up cos I'd had enough to drink, end of a great day out!

We had to change at Newark which had zero places open to get warm, get a coffee or anything but luckily, I'd drunk enough to think I'd discovered a micropub on the station:

And that is the end of BRAPA 2018.  I'll be back tomorrow to tell you about a pub crawl of London based on my favourite joke.