Let me transport you back to Boxing Day, it was about 1pm as I approached our third Preston pub of the day, flanked by Father BRAPA and Matthew Lawrenson.  It's fair to say it hadn't been amazing so far, a slightly above average Wetherspoons had been followed by a pretty lame Marstons.

"Eviscerated" was the only word I wrote in my notes all day.  Preston does that to a person.  I was going to describe what Marstons had done to the Wellington as to what Jack the Ripper did to Mary Kelly, and Dad, very much a Victorian gent in his own right, so a murder suspect, thought this a good term.

And the scene didn't seem to be getting any brighter as we swung a left into a little courtyard (not Millers Court) and were confronted with beer barrels, a blue bin and a scene very reminiscent of the Brew York Tap Room in York, and I didn't really want that ....... 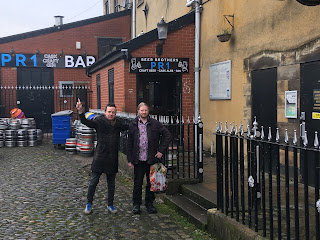 So imagine my surprise when we pushed the door to find a cracking dimly lit room, carpetted, full of old blokes who all closed ranks when they saw my Hull City top.  Never doubt Lancashire's ability to impress pubwise just when you think all hope is lost!  "Hello Matt" said the perky landlady who allegedly likes the odd herbal substance like any good barmaid west of Rochdale, this was a good moment in the day as it is hard to go on a pub trip in West Lancs without M.Lawrenson being recognised by somebody.  This place is listed in the GBG as Mad Hatters, so this most recent change of ownership (it was Ale Emporium before) means it probably will be dropped from the 2020 GBG but I guess rules are rules.  As I supped my glorious chocolatey ale from Beer Brothers who own this gaff, the old blokes snarled at us and loudly debated Boothferry Park v KComm Stadium but didn't try to talk to us at any point.  There seemed a little bit of doubt into the room as to whether this place would last, or maintain the high standards we found today, but I have to say it was my favourite of the four we visited.


A long straight road took us to our final pre-match pub, north of town in that Fulwood area where Matthew had been a twild and a recent maybe murderous event had closed part of the road the pub was on.  Matthew actually took us a slightly more threatening diversionary route in the hope some peril befell us but almost sadly, it didn't.

It wasn't long before the pub was looming out from behind a fence like the local sex pest:


The most highly anticipated pub of the day as Matthew has often found it full of twild life, twogs and diners, a combo to send the BRAPA rage flying into overdrive.  But guess what, I enjoyed it so suppose we got lucky.  A friendly welcome, a Christmassy piano and fairly tasteful decor, and a lively selection of locals made for an easy community atmosphere, the likes of which I hadn't seen for a while on my trips.  The talking point, if you're forcing me to talk beer, was my pint.  Ugh, so sour, but annoyingly, one of those "what if it is supposed to taste like that?" pints, a Castle Rock guest called Sir Peter Mansfield who was a science dude who had a Ready Brek glow, possibly from all the Plutonium, which might've got into this pint.  Dad was feeling bold, and took it back on my behalf.  Apparently, the bar man was very good about it, more than happy to change it despite perhaps not being 100% sure it just "wasn't to my taste".   My replacement was spot on.  Two lively groups combined to trap us in the corner, where they had a captive audience so they quizzed us on Hull City's chances today so we played it down, as is the way to do it if you want your team to win!   So a positive pub experience to end on, and I'd not have thought that in the build up. 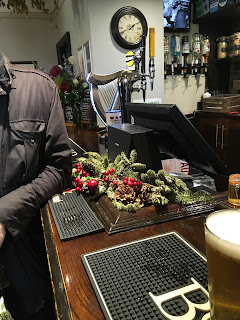 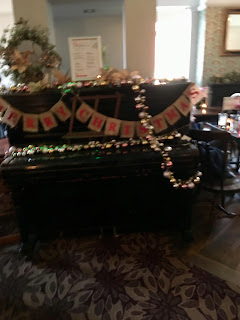 We then walked through a park, said farewell to Matthew, and went to the match.  And guess what?  Hull City won again.  No stopping them at the moment.

Fast forward three days to Saturday 29th December and we landed in Lincoln for the annual Welly Winter BRAPA Day out, where those of us who used to drink together in Hull's once brilliant, now closed Wellington, meet up for some ticking.   As the majority live in Lincs, we got ourselves down nice n early, via Newark, where we had a 'Spooooons to tick.

My first trip to Lincoln in nearly 4 years, five pubs in the GBG to do, only one was in back then, and this was my first foray south of the railway station away from the pretty cathedral town that 'THEY' like you to see.   Well, first pub foray, you'd have to go back to the days Hull City used to lose every year at Sincil Bank since I was last out this way.

It was hard for me not to compare this to former 'Spoons of old theatre/cinema credentials, Picture Palace in Ponders End.  Sadly, it wasn't a favourable comparison as it felt much more like a Wetherspoons than anything else (if you know what I mean!), and you had to really squint hard to see a bit of curved ceiling which could perhaps be a throwback to it's past.  It was just after 10am and packed to the gills with shakey post Christmas drinkers and breakfasteers with ashen faces  and dark circles under their eyes.  As is the way in a morning 'Spoons scene, one barmaid was admirably trying to serve about 20 impatient people, so I managed to make eye contact and smile early so didn't have too long to wait.  And a waiter bloke did try and get her some help.  Dad went to find a table and located the good Tom Irvin, blending in to the crowd nicely in his Quicksilver knock-off coat.  It was a squashed messy scene, I drank this thing called Pheasantry, nice enough but tasted like a pint of 'Spoons branded beer, and Dad got one of those craft 'J20's' to be good.  The scene picked up when our final gang members, mother n son combo Christine and Ben arrived, and I was given a late Christmas/early Birthday prezzie which was that booked on 'Spoons carpets!  YESSSSS, love it so much.  And a copy of Iron Brew, the Scunny area CAMRA mag where Christine's done a BRAPA article on our day in Cleethorpes.  So at least that lightened the mood of a pretty grim 'Spoons start.

Next, we kept walking south to our furthest point, a pub that had just alluded me on my previous visit in Jan '15, but still in the GBG, and you could see why .......

First, full marks for the pub being open at 11am as advertised at such a nothing time of year, I've learnt not to take this sort of thing for granted!  We were greeted by covers of old Lincoln City programmes and an excellent chirpy barmaid.  I went for a BrewYork ale which had just gone (serves me right!) so I went Harvest Pale, still a bit mindful of my dodgy Castle Rock pint in Preston 3 days back, but this was glorious stuff, quality, lacings, perfection.  Oh, and they care enough to have a sign in loo telling you to rate the ale on WhatPub and even Untwappd.  A throwback to the days I used to go to VAT & Fiddle in Nottingham pre-BRAPA and loved this ale so much I got nothing else, but have not liked it as much in that 2014-2018 period!   Pub itself was a nice two roomer, bar was great, suffered a bit from us being only customers as Ben pointed out, so bit chilly and lacking in atmos, can't blame pub for that, back room seemed like it'd be better on a busier day but we sat in front bar.  Xmas decor-wise, too much tinsel, not enough tasteful,  and that blingy peacock wallpaper was an abomination, could they not find a golden eagle design or was it tribute to former Tiger and Imp Richard Peacock?  Don't be silly!  Was like something you'd find in a bordello, kept imagining a blousey 65 year old with big hands called Ruby or Steve coming in to take you into some back room for a massage.  Anyway, a slow burner, but like all quality things, the longer we stayed, more we enjoyed it, one of the stronger pubs of the day.


There were still three pubs to go at.  I'll tell you all about them tomorrow!