First rule of pub blogging, if you haven't got a photo of a pub cat or a foaming pint of best bitter being drunk by an grumpy ancient, make sure you stick a Bass logo in there for your opener.  It's the only way you'll get these chumps to click on yer link.

Anyway, now for my joke...... brace yourselves .....
"Did you hear about the dog on the London Underground that swallowed a trumpet?"

"It went from Barking to Tooting in 25 minutes."

Which better way to honour my favourite joke than to build a BRAPA day around it?  Especially when pubs in both Barking and Tooting were required.  Let's just say the joke writer was optimistic, it took more than 25 minutes, a lot more.  Though clock starting and stopping didn't really work, though I'd say it was somewhere between 40 mins to an hour.  Tom, do you have a clearer idea oh sober blackcurrant train expert one?

Anyway, the idea had been in my mind for a while and finally, the perfect opportunity presented itself.  This happened when Hull City's cup game at Millwall which I'd pre-booked (at some expense!) was inexplicably moved to 2pm Sunday because the East Timor & Tibet branch had chosen it as their televised game (who said FA Cup magic was gone?)  Oh well, all the better for BRAPA!

Despite a typically dense email from Tom about our 'travel moves', me and Dad shinned down to Barking via Liverpool Street where it became clear Birmingham City were at West Ham for a lunchtime kick off.  Young men in burberry who looked like they loved estate pubs but didn't carry beermats started singing the following ditty every time the automatic train guard chirped up ....

I made up most of it cos they'd got off the Tube and were drowned out.  Finally at Barking after an IFGW incident (Idiot Forest Gate Woman), we peered down the street for the pub.  Saw a Spotted Dog pub, felt confused, then Dad spied, even closer, our pub .......

So, the first BRAPA tick of 2019 but it was a scene stuck in time as ruddy faced West Ham fans lined the walls, trying to force down two more pints before the Tube to the ground.  The pub smelt of dog food, was it piped in for the pub name?  Well probably not, as the 'Spoons menus with their little history section on the front claimed the name was all to do with a ship and nowt to do with dogs at all, which seemed rather disingenuous.  Just as in Lincoln's Ritz last week, we found Tom here.  He was hovering at the bar (sort of a bit 'side on' for my liking) where a flustered old lady was trying to serve the hoards.  The couple next to Tom had spent an age trying to get her to top up their Ruddles.  As they turned to leave with consolatory words for the barmaid about how well she was coping in the circumstances, I smiled thinking they were about to say something about the tricky service situation, but the bloke just barks (well it is the barking dog) "DON'T STEAL MY RUDDLES!" which I had no intention of with my Titanic White Star on the way.  Finally Tom got it to us, Dad had found a booth, this was one of those older school Wetherspoons when they made an effort to make them cosy and pubby, enjoyable atmos with or without the 'appy 'Ammers.    In all the mayhem, Tom had ended up paying minus 32p for his pint of Blackcurrant.  Result!  The clientele weren't the only dangerous things, the glass collector lady with eye makeup of legends watched an old lady on two sticks struggle to leave the pub, without so much as even offering to hold a door, and warned our flustered barmaid "we don't accept paper fivers!" presumably in case she'd forgotten, or the Hammers were trying to pull a fast one.  Of course, they should be, as Cooking Lager would say 'it's a promise off the Queen!'  Time to go.


So, Tooting bound then!  Well, not quite as Limehouse was a good place to change so said Tom and who could doubt him, for I needed one of my few remaining East London ticks here.

The train was absolutely packed, Tom tried to make out this was in no way related to football traffic in any way cos he'd only seen 2 scarves and not many skinheads or something.   This was actually a steaming pile of horse poo as we told him.  "Have you ever been to West Ham since they moved to their new stadium?  Cos this is what their fans look like these days!"  He admitted he hadn't.

It was bitterly cold in Limehouse, where George Formby did his famous Chinese Laundry Blues, nothing to do with Birmingham City (unless they were owned by Chinese people who laundered money, which am sure isn't or wasn't the case), so after a brief rendition, we realised we'd walked the long way round but soon found the pub ...... 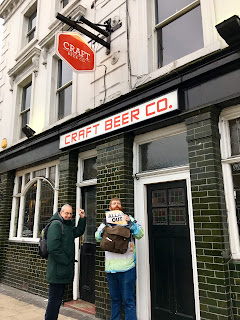 Can't say the thought of entering ANOTHER Craft Beer Co pub filled me with a great deal of joy, but as with the Holborn one I did in September, I felt it did have something going for it.  Green bricks of course are a nice sign, and this former Railway Tavern was actually a Bass pub and you could actually get a sense of 'old pub', even if the Bass mirror (top photo) was probably bought off Google in November in a special offer with an Demi Lovato tee shirt.   It also had a bit of an Antic vibe, but I think this was solely down to the weird mismatched retro furniture which is supposed to be oh so contemporary but is actually just uncomfortable.  The two bar blokes postured and preened, looked like they had the ability to be proper hands on with tasters and advice, but one look at us, just happy to get us away from the bar and in the corner.  Dad sat us right near the front door, and though he offered to move us, I declined but regretted it as pub traffic meant it was one icy blast of air after another!  Tom asked the question all BRAPA Stans were wanting to hear "is this dog a twog?"  The owner had gone off to the bar, and came back to me saying that it was too early to judge how much of a twat it was, which I guess out of context sounds a bit harsh to a poor defenceless, some may say "cute", creature.  I later decided no it wasn't.   Mr Dog (disguised as Eddie the Eagle Edwards) soon joined her for a smooch, a slurp of red wine and a laptop fiddle.  Dad meanwhile, was pleased to witness something he always looks out for on our London trips, his first LMH of the day (London Man Hug).  My favourite pub feature was in the bogs, possibly a novelty Christmas present,  a strange grey device you pissed on to turn it white which then emitted a pleasant fresh smell.  But you know, on the whole, not a pub to be sniffed at!

I'll tell you about my final 4 pubs of the day tomorrow, shorter descriptions as I get more drunk and stop taking notes, so that can be of some comfort to you all.