BRAPA - To Boldmere Go Where No Pubman Has Gone Before : Trekking in the West Mids

As so often seems to be the case on a Championship away day, we were back in the West Midlands, home to all those football teams who you could never call 'very good', but aren't bad enough to be called 'rubbish' either.  And they all hate each other despite being almost identical bar the colour of the shirts.  It is such fun.

So now I've lost 80% of my readership, let me take you back to last Saturday where myself (Spock), Father BRAPA (Jean Luc Picard) and Tom (the know-it-all with the beard, 'Will'?) aimed for some pre-match ticking on the 'Aston' line before our game at 'the Villa'.

We 'alighted' (as we experts say) at a railway station with a real nod to BRAPA, Twylde Green, where we walked in the drizzle a short distance to a place called Boldmere.  Quite a pleasant lively main street, plenty of Asian food outlets, funeral directors and hair salons, one of which was called UBU so I made a Purity joke which would've had the beer bores lapping it up had I had my Periscope 'live feed' turned on.  All in all, it was not too dissimilar from that Brampton area of Chesterfield or somewhere else which escapes me.

It felt like this main drag was geared up for a Wetherspoons, even if you didn't know there was one.  I did however, and we faffed around with photos and found two doors shut before finally finding the really obvious main entrance ...... 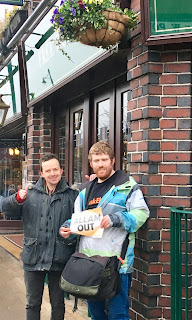 After recent Saturday morning 'Spoons visits, I entered this place with a slightly nervous air, wondering if I'd find the one member of staff serving 30 angry people, pumps turned around, poor beer and sticky tables littered with dirty plates and cutlery.  So this was something of a surprise, and its 18 consecutive years in the Good Beer Guide was there for all to see with a rather classy display.  People were dotted around, staff were in evidence, yes it took longer to get served than you suspect might be the case in yer back street local, and I stepped forward with two 50p vouchers for a nice cheap round .... and this was after Dad has demanded Oakham Blue Skies.  "It's 6%!" I squealed like a baby shrew.  "Am I bovvered?" replied Dad (sort of) channelling his inner Vicky Pollard, and promptly disappeared.  "Did he used to play hide n seek with you when you were a twild, and always win?" asked Tom as we wandered around the pub with the drinks a few minutes later, but Dad was waving from a balcony.  Upstairs 'Spoons, well that's a rarity for me, must be one of those posh Lloyds No 1 houses or something?!  Tom had already put forward his theory that Martin Taylor could actually be an undercover policeman, when conversation got even darker.  First the Madeline McCann case was discussed at length, before we revisited our Deathlists that we'd compiled in the Nag's Head in Loxley, Sheffield back on 17th Oct 2015.  I just have two to get, Clive James and Murray Walker, but Dad and Tom both have Phil Windsor and after his recent driving escapades, it seemed relevant.  Not sure why the chat was so bleak, it was a happy 'Spoons and a good start to the day.


Next we took a 20+ minute walk from Boldmere into Sutton Coldfield, one of those places I'd always heard of but never thought "wow, I'm dying for a trip there!" 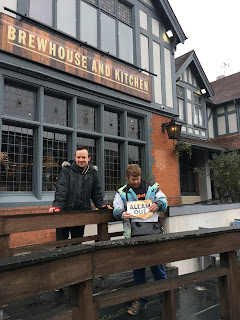 My first thought "Good God, can't they at least restrict Brewhouse & Kitchens to London where they belong?"  But no, it seemed, and in quite the same way I'd jump off a cliff if the GBG told me it was the right thing to do, I had to go in and neck a pint.  Thing is, modern upmarket style bars like this are always quite dispiriting in terms of atmosphere, but at least you can doff your cap and say "well played on a great pint".  But I've never said that in a B&K, the beer always falls short in my opinion.  Here (after one of those annoying 'coming soon' labels had me ordering a beer that wasn't ready), the 004 Oaks was like a pint of tap water with hops dropped in it, not a quality issue, just a shite beer.  Remember the fish tank in Glatton last week?  Well here they'd stuffed the fish tank full of hops like that'd be an interesting thing to do.  On the plus side, I had a great time at the bar cos this Icelandic looking dude probably from Solihull with a beanie, sleeve tattoos and a sentient beard which ordered him a Gamma Ray with a Hot Chocolate, paid by contactless (of course),  and sat moodily at a firepit in the centre of the pub and you know, it just seemed right!  When I ordered Tom's blackcurrant squash just after, the barmaid looked dumbfounded, did she not realise Tom was at the cutting edge of the nu-hipster revolution? Oh, and Dad went missing again and it took us ages to realise he was still in the bogs, enjoying the hand soap options of Lemongrass or Bergamot, which would've tasted nicer than what I'd just ordered him.   Can we leave now?

Capitalising on Sutton Coldfield's recent foray into the well heeled trendy crowd, it was nice to see one of our fave #PubMen had opened a craft bar opposite this pub despite supposedly being in Crete or Greece at the time ......

Next, we crossed the road and turned left off the main street to our final and more traditional pub before kick off, deliberately planned this way as we might want to stay a bit longer here (i.e. squeeze in an extra half) than the previous two..... 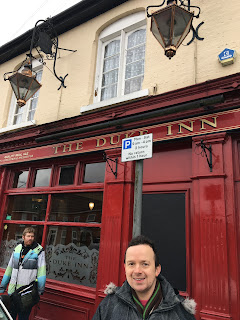 Ah yes, this was a timely reminder of why I so enjoy the West Midlands as a pub ticking area, basic side street boozer, almost hard to believe we'd only walked about one minute off the main road through the town.  It shouldn't have been difficult at the bar, as we were greeted by a young hospitable barmaid, but I started trying to remember what 61 Deep used to be (if anything!) but the barmaid thought I meant what used to be on THIS handpump, so she said Deuchars, and that confused me more! Not that it mattered, but I took a photo cos Dad suggested I could ask the beer world of Twitter when I did my 'check in', but I got her in shot (for once, I wasn't even meaning to!  HONEST) so she says 'hope I wasn't in that photo!' so I then try to explain about BRAPA but it didn't work cos I didn't have mi bag n paraphernalia with me and oh dear, well I felt like a dork, so sat down with my HPA and said nowt!  Never mind, in the bogs, some jolly gents tell me they've already had a group of Hull City fans in and we were like 'hmmm, wonder if they were the Gooligans or the S.S.?'  They were all Villa fans but were not going to the game but said they were nervous!  Dad was loving the place .... "anything could happen here, a brick could come through the window and I wouldn't be surprised!" he said with a winning smile.  Another barmaid came through clutching a bag of limes, she was an even happier soul if that was possible.  Then our original barmaid came back through to try and put the horse racing on for the codgers, one out weirded me by almost saying something dodgy, then stopping himself and telling her "I wouldn't .... I've got daughters older than you .... besides, your old man is a copper isn't he?" and I think it might be the best pub quote I'll hear all year.     Dad & Tom then put the gloss on a cracking pub experience by having the longest debate about how much an AMT coffee napkin actually cost.  I yawned.  Time for the match!

Then for the game which was a bit of a cracker really.  Villa swarmed all over us, then we went all brilliant and went 2-0 up with classic goals.  Then we were unlucky to concede before half time cos our defender had gone off injured.  But second half they equalised, the 30K plus crowd properly got behind them, I thought "we are so gonna lose this!" but we weathered the storm, and if we'd signed the right Chris Martin and not to dude from Coldplay. we could've even won it at the end but overall happy with point, and it broke my 4 defeats in 4 record at Villa, which shows what an unlucky pub Barton Arms really is despite its Oakham Heritage gloriousness (ignoring the Thai bullshittery).

Post match, a nice Twitter bloke called Neil Harris had come up with a pre-emptive cracker near to New St for me so we headed back for 'Pint Shop' to say hi.  The one in Cambridge goes in and out of the GBG, so it seemed like a fair bet.

Well, it had scaffolding all around it, was a heaving throng of throbbing twenty somethings, the staff were top class, but all the beers were on those little taps so hard to so what is cask and keg, not that it should matter of course to a true woke honorary millennial like myself, but I panicked and chose a pint of 'number one' from the menu which wasn't a pint of wee, but a very nice Salopian Oracle, sadly in a handled jug but bless the barmaid's wretched Brummie heart, she'd waited for me whilst I'd gone to the blackboard despite how busy it was.   No chance of a seat, it was draughty around the front entrance, upstairs was only for whiners and diners, so we secreted ourselves into a side near a booth and I sent Dad on a mission to find Neil Harris.  "He looks like a Neil", "I think he just nodded at you", "I think this Neil might be bald", "Is he old of young?", it was a decent scouting mission from Dad (and Tom) but to no avail, so I did them a 'guess the football results' game on my phone (Dad won) before we decided to end it all (so to speak) and make sure we were back in time for the half six train.

Train home then wasn't too bad, you couldn't do a Brum day much better than this we reflected.  Neil Harris messaged to apologise, he'd got comfy in the Victoria and couldn't move and on this Pint Shop showing, think he made the right call!

Onwards and upwards, I'll be back on the BRAPA trail this Friday in some Yorkshire town of ill repute.  January hasn't been the most productive month so far but edging back towards that 1475 mark where I 'declared' on the 2018 GBG, so have nearly made my numbers back up.  Good.