BRAPA - Harrogate, still as Harrowing as Ever 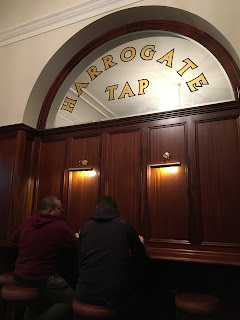 "SHIT, THANK SHIT FOR THAT!"  I didn't mean to say it quite so loudly, but as the delayed bus finally swung around the corner to take us from Wetherby to Harrogate, it just came out, much to the amusement of the attractive brunette, the only other person waiting with me.   Luckily, in this day and age, no one with Tourettes gets the kind of raw deal they used to, perhaps she thought I had it?  For good measure, perhaps I should follow up my outburst with the odd 'fuck' or 'bugger' ?  Thankfully, I realised the driver was asking where I was going, so that put paid to that possibly unwise plan.

This was a much more pleasant journey than the L**ds to Wetherby one earlier.  Okay, so I ate my cheese n pickle pasties in an angry jerky manner but I was feeling generally positive, three pubs to do in Harrogate and still only 6:30pm on this bitterly cold Friday.

Except it wasn't THREE pubs, it was TWO I soon discovered.  The 'Swan on the Stray' had been renamed just 'Swan' and I hadn't realised, I'd done that in 2013.  In fact, I only looked because the rubbish GBG App was only indicating one pub on Devonshire Place and I was checking to make sure it wasn't the same pub as '10 Devonshire Place'.  Does this make any sense?  Are you keeping up?

Ahhhh, my annual trip to Harrogate.  Toffee nosed snooty cold uncaring unfriendly twee ponce shop Harrogate.  Where blousey ladies crowd in to Betty's Tea Rooms and everyone walks around with a silver spoon on their tongue and a stick up their jacksie.

Pub-wise, there's been some I've enjoyed over the years.  10 Devonshire Place was one, Major Tom was good in a hipstery smash your head against the wall kinda way, Hales was good for a laugh back in the day but I got bored of it quickly, Coach n Horses and the Spoons both decent.  Little Fail House, the micro, with their unannounced NY closure 2 years back was maddening but ok when I finally went, friendly at least.  But it is your Montpelliers and your Blues Bars and your Fat Badgers that really set the teeth on edge.

Tonight's first pub was classic HG, "Bar, Cafe, Kitchen" it said.  What about the word 'Starling'?  Was I in the right place?  After much lurking, I saw it printed on the big glass windows. 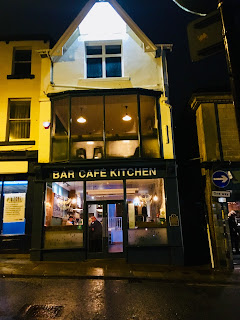 The name said it all and I walked into the small downstairs bar where the four tables to the right were lined with smug looking pizza eaters.  I smiled at them all, no one smiled back.  At the bar, I was greeted by a typically artsy, quirky young lady who'd stepped out of a vintage magazine in Hebden Bridge.  Not for the first time, I tried to combine the name of the beer I wanted.  "I'd better have a Winter Stout under the circs, ho ho!" I said, it was snowing a bit.  But it took her ages to realise what I was on about, it wasn't funny anyway, I need to make a note to self to stop.  Finally, she got the gist and says "If it's gonna snow, I want a full whiteout or nothing!" which was a nice maverick response.  "More Seating!"  beckoned a sign up the stairs, I did this twice as I needed the loo once, both times, I gave way to the same male staff member.  Neither time did he thank me or so much as acknowledge me.  This is why I dislike my Harrogate visits in a nutshell.  I shared the upstairs room with a bloke I did warm to.  And how could you not warm to a Jewish American Danny Baker?  I hoped he was a pub ticker.  He had that aura of gentle kindness and wide eyed inquisitiveness.  The highlight was when he suddenly loudly clapped his hands together and made me jump.  "Sorry, am tryin' to kill a fly!" he explained. Bands like Elbow and Cat Empire blared out of the speakers, I looked them up on Shazam and funnily enough, both bands looked like the kind of folk who'd be eating pizza downstairs.  I took my glass back to the bar and barmaid, more animated now, wished me a good rest of night which was nice!  And she was right cos I was leaving here!  (Kidding, but not really).


Just a few minutes closer to the railway station was my other pub, though I walked the long way around cos I'd already said no to the homeless guy once and would feel guilty a second time.  I then saw a homeless lady and had to say no to her too, "have a good night anyway", she says.  "I will, you too" I reply without really thinking.  "I'll try" she says.  And I find always good to have a positive attitude even if you have cashflow issues, it can get you a long way, just ask Nigel Adkins.

Now I like North Bar in L**ds a lot, and I quite enjoyed Further North in Chapel Allerton, but if anywhere could kill my love of this mini-chain, it'd be Harrogate.  Let's go in and see shall we?

But this was much more like it.  Okay, it was never going to be an old style pub, and it didn't have the lethargic long lazy wooden layout of its L**ds counterpart, but it had an atmosphere, it had loud laughing people, a cracking barmaid with x-ray vision who saw me through a crowd and told her gormless male colleague I needed serving, it even had a photo booth, a man dressed as foliage (probably one of those crazy pagan Green Man types), as I took my delightful Magic Rock Ringmaster to a table in the main bar area - note the 'high peril' I put myself in, putting myself on the line for my readers of course so you best be bloody grateful!  And it soon got busier, louder, harder, faster, pussycat, kill kill! (Sorry, got a bit carried away there).  Foliage bloke and wife's friends all turned up, lots of hugging, standing about, asking if they could take the chairs from my table.  I was like "YES, YES, TAKE THEM, TAKE THEM ALL, PLEASE, JUST LEAVE ME BE!"  In fact, down three steps in the direction of the bogs and photo booth was a perfectly good separate room, but it sat empty.  Why do people do this?  Insecurity in the worry they are missing out on the 'action'?  Vertical drinkers who wanna just chug one down and move on ('sitting down is for the weak' mentality?)  Or simply a total lack of spatial awareness?  Doesn't really matter, it is wrong whatever.  So whilst I look back on here with mainly positive thoughts, always good to check your notes from the day.  And late on, I did write "Bar 19 Blackpool for boring cunts" which shows just how frenetic it became as we neared the witching/bitching hour of 9pm when all Harrogate folk hit the prosecco with a new found vim and vigour.

My train was a bit delayed, so I had a swift half in the Harrogate Tap, which I sometimes think is my favourite of all the Taps, but I should probably be loyal to York cos it is rather good unless you go in on race day or a Saturday evening.  Sheffield has its moments but beer quality and space are sometimes issues, I'd need to see Newcastle again in the day time, L**ds Tapped I can't get on with, and I've forgotten any others. 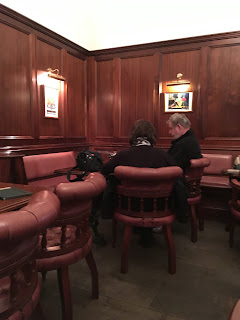 A friendly bloke who was obviously a visitor to the town told me the hand dryer in the gents was making him deaf, and I almost actually missed the train and had to run!  Productive evening to take the pressure off Aston Villa the following day, which I'll tell thee about tomorrow.