BRAPA - Always Take the Wetherby With You

My BRAPA debut in Wetherby was finally here.  Bit of a strange one, as it isn't one of these Yorkshire towns that no-one has heard of.  It has a racecourse, it has a river, it has a #PubMan, it has a famous fish and chip restaurant.  But then again, it has no railway station, and a Friday evening bus ride from L**ds took approximately 80 minutes.  One dude had the right idea, bringing a six beer carry out for the journey from North Bar, Belgrave Music Hall, or one of the other nearby crafto beardo outlets ...... he knew what was in store! 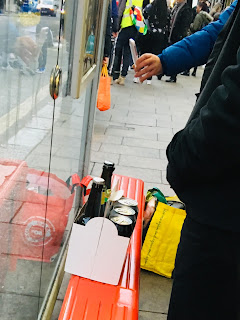 I felt quite sick, hot and sweaty as we wound our way through all those GBG pub-free places like Seacroft, Boston Spa, Collingham, Thorner and Bramham.  Only a lady trying to force her copy of Woman's Weekly on an embarrassed bloke was a moment of any note, at least she didn't hit him on the bottom with it.  Jeez, just let us hope the pub would be good ..... 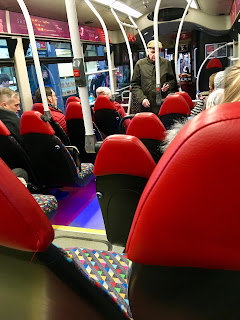 Boring story time.  This was quite a big tick for me as it happened.  Back on 13th August 2015, I went to the (sort of) wonderful Anglers Retreat in Wintersett, meaning I had just ONE pub left to do in West Yorkshire (this one), to complete 'West Yorkshire' for the first time.  But before I got chance, the new 2016 edition dropped through my letterbox, this pub had been binned, and remained out of the GBG until this year, by which time it had a slight name change from 'Muse' to 'Mews', either because they'd realised the band were shite, or they thought 'Mews' sounded more upmarket like the town they probably aspire to be, Harrogate (I'm joking of course).

It was pitch black and trying to snow when the bus unceremoniously dumped me outside a giant Morrisons, and I tottered up to the pub where fellow totterers, two women in ridiculous stilettos, distracted me with long legs and a shriek, and I missed the pub entrance. 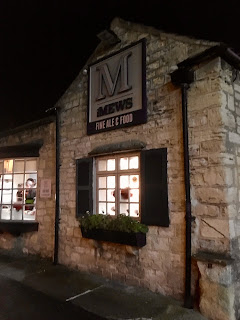 Well, it certainly was a 'Crowded House' (ha ha) as I entered to platters of sandwiches and people who had the nervous squint and stale air of the 'office worker' milled around in the back and middle of the pub.  Bit late for a Christmas do?  But then again, we'd had ours on Tuesday in a Japanese place so I had no room (literally) to talk.  I fought my way past a couple of knock off Radley handbags and Cath Kidston prints 'bar-wards' and a lively pale young lady with purple eyeshadow which made her look like she'd been a Polish POW since 1945 did well to see me through the gap.  "You with the big group?" she asks, and sadly, I said I wasn't.  Surprised, she charged me money for a very nice pint of stout from Leicester, the only time you'll ever hear me say 'very nice' and 'Leicester' in the same sentence.  With zero space, I did something the 2015 Si wouldn't have done and asked two blokes including a young Patrick Kielty if I could share their table which they agreed to.  I pulled my chair back towards the wall, my pint at arms length, as if to say "I'm not invading your space".  Then, came an onslaught on buggies and twogs as if the pub couldn't get any more chaotic, and there was no sign of the party dispersing.  Dryanuary?  That particular memo never reached Wetherby.  As soon as I opened my bag to try and smuggle a cheese & pickle roll, the twogs descended - they're not even meat, gimme a break!  There was still a long time til my bus, but I couldn't sit here any longer, so I braved the cold night air .....


I passed the posh chippie which I nearly named my blog after (Wetherby Aler, I'd probably be ripping off the local CAMRA mag name) but I didn't think the Americans and Canadians would get the reference. 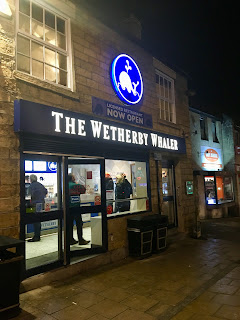 To kill time, I found a little footpath down to the river and hovered in the sleet, wondering how cold the water was, and having a wee behind a bridge as the odd dog walker and mad jogger wondered what on earth I was doing lurking down here! 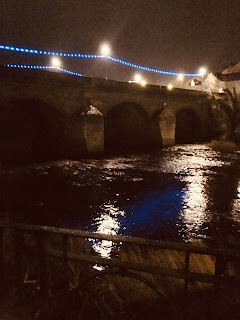 On the good side, I didn't have to get a bus back to L**ds, as Harrogate was only a 30 minute bus ride away, and I had THREE new pub ticks to do.  Well, it'd be rude not to do them wouldn't it?
More on that tomorrow night,