I ended up walking a grand total of 15.8 miles on Saturday.  Okay, I can hear you now "what do you want Si, a medal?"  Well yes actually, I do my pub ticking for YOU and you alone.  Probably.

And the hardest leg of this leggiest of days (apart from my Runcorn 18 mile epic, very much the Los Angeles of Cheshire) was the trek from pub 3 (Thornton Hough) to pub 4 (Barnston).  Especially as it started out in the pouring rain with Dad telling me Hull City were losing and putting no effort in!  Shame cos I hate Cardiff as much as the next man, and wanted Fulham (very much the 'kitten breathing gently on the back of your neck' of football teams) to go up instead!

An hour or so later, with full time approaching in the football, I finally reached Barnston.  Would it be worth it.  Well, "HELL TO THE YEAH" as I believe the kids say nowadays when they're not moaning about Keg Buster by Bill Tidy not being millennial enough for them.   Shall we go inside and stop rabbiting nonsense?  Yes! 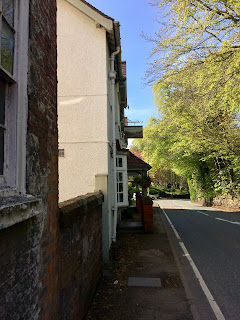 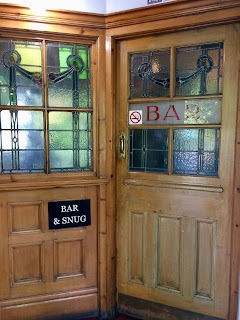 The first thing that struck me in this incredibly peaceful, beautiful pub (apart from the shrine of dead locals, cat and dog) was the fact that the assorted locals propped against the bar and around the bar and snug areas hardly reacted at all to my arrival.  Occasionally, someone might say 'hello', you often get a nod of acknowledgement, but usually at least someone turns around to glance, in case it's one of their six fingered farmer friends, so this was unusual.   Although there was a blonde lady to my left as I waited VERY PATIENTLY at the bar, I thought I was looking into a mirror to my right to see her reflection (yes, I'm aware this would've made me a vampire), but turned out it was a barmaid in another room.  Finally, I got some local ale and took it through to a very green room (another bloody fire in the main atmospheric bar was killing me with the heat!), my favourite colour, and this had been closed off from me on the way in as a chair was propped against the door.  Although the only customer at first, I loved it here with the decor.  I'd been wanting to do this pub for quite a while with it being the first alphabetically listed under Merseyside since BRAPA began, so was delighted it was obviously a classic.  A group of old codgers who obviously hated each other walked through, though I appreciated their urgent calls of "WE NEED BEERMATS!" (I'd brought a replacement Ember one sent to me by the brilliant BritainBeerMat).  How could a pub like this struggle for beermats?  Shocking.  Anyway, the group all hated each other.   "Can I sit at another table?" groaned one.  "yeh, preferably with your back to me!" said another.  The one known simple as "The Canadian" came in for the most abuse, simply because he was Canadian from what I could gather.  He sounded like the others to me.  Then, they finally softened to each other and talked about Paul Lambert in weary voices.  It was that kind of a pub.


Well, well, well. I hadn't expected anywhere to compete with the Harp at Little Neston for pub of the day but this sure did.  I had a soft spot for the Wheatsheaf at Raby despite the dining, and even the Brunning & Price pub in Thornton Hough was a fine example of what the chain can do.

And it wasn't over yet, 25 mins back to Heswall where I could get a train back to Liverpool from, but more importantly had two GBG pubs to tick off.

Were they anywhere near the station?  Course they bloody weren't!  And it was another long walk (my legs aching to buggery by now) into 'Heswall Proper'.  I started with the furthest one out.

And when I turned the corner, I could see the sea!  Or the River Dee to be precise for the second time today, which I only realised when I connected it with the pub name ...... and then I saw the pub on a traffic island all alone, and stood in the road to take the photo.

And the unique outlook of the pub was matched on the inside, which at first I thought was a bad thing, but soon it grabbed me with 'proper pub tentacles' and won me over.  If I was still there now, I'd probably be declaring it 'pub of the century!'  But seriously, it all started when I saw only two of the six handpumps on, and one of them was good ole' Dooooooom Bar.  The other being the beer I'd just had in Barnston!  I had it again.  In fact, it didn't feel like a GBG pub at all, as the friendly scouse man served me but his partner with lank grey hair appeared behind him and said "I've been dry for 5 and a half days, don't make me serve!"  "You are doing better than I ever have this year!" I told her encouragingly and she sat at the side of the bar with something fruity looking and shivered a bit.  But whether going to the loo was my epiphany, or my chair, which strangely vibrated throughout the entire time I was here, I started to love the atmosphere.  It was very Isle of Man to be honest, especially Douglas.  Those really traditional pubs like the Old Market Inn, but with less edge, perhaps more the Albert Hotel in Port St Mary.  And for those who don't know those, it also put me in mind of Lincoln's Morning Star and the King Billy in Cottingham, East Yorkshire.  Pub five is normally the one where my memory goes, but this was as vivid as they come, despite live football trying to dominate.  Unique. 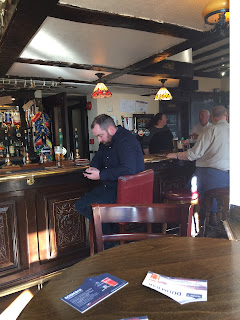 So that experience had given me the energy I'd needed to push myself for that final pub, and finding a shortcut through a car park saved my legs from further torture.

I'd vaguely glanced at the GBG entry, and seeing it said '2016 opening' and 'Jug & Bottle', I'd assumed it was a micropub,  I was wrong, very wrong.

Yes, it did feel like a cavernous prosecco gargling dining hole on first glance, but the Dee View's intense no-holds-barred pubbiness may be afflicting my recollections.  It's just that when the staff where pristine shirts, all look identical, charge a merry little fortune for a drink and then you can't find anywhere to sit due to 'reserved' signs, it's hard to look on it all too fondly.  However, 5 pints in and buoyed by my accidental 'reserved table stealing incident' at the Red Fox earlier today, I was feeling bold enough to sit at a table reserved for the Ainsworth's, who should have been here 14 minutes ago.  I explained to staff I was perching here until/in case they arrived, as they tried to hand me menus and bread and stuff, and after some hesitation, they told me it was fine (I was telling them, not asking them, anyway).  But when a footbally Dad & Son vacated a table for two across the room, I thought it only right to sit here instead.  Still, nothing Ainsworthy had yet arrived.  And then, a jolly old bloke asked if he could join me, but he had a wife of similar seating want so I insisted they sat together and I jumped up like a jack rabbit.  That meant I had to ask the table next door, an enthusiastic Nigel Adkins type and his wife who looked like Medusa, only sterner, if I could perch on the edge of their table.  He loved it, she agreed, just.  In the mayhem and with my back now turned, a family had sat down at the Ainsworth table.  But on closer inspection from the gestapo staff, these were FAKES, not the real Ainsworth's, taking their chance as I had earlier.  A waitress tried to be helpful now and tried to close a curtain, worried it was shining in the eyes of me and Mrs Medusa.  We told her "no, it's not often we see the sun, leave it open!" and we then bonded over our love of the sun and hair made out of snakes.  I loved Mrs Medusa now.  But whist this was happening, the REAL Ainsworth's had arrived and turfed out the chancers, 34 minutes late.  It was all too much for my brain, I jumped up and left.  Proof if it were needed that amusing positive people experiences can save you from dull pubs,  After all, people make pubs, whatever your heritage guide might tell you.


People also make train journeys sadly, and I could tell I was later out of Liverpool than usual when I finally got on one back to York and after another epic walk and wait at Heswall station, and change at Bidston wherever the heck that is.  Carnage.

Firstly, I witnessed a punch up between Liverpool and Everton fans at very close quarters.  Fun to watch but a bit pain-staking as police and station staff took ages to react, and the onlookers treated it like a Merseyside derby cheering on either blues or reds.

Then, on the York train, a drunkish looking woman got on and asked if it was stopping at Warrington.  When I told her it was, she looked confused.  "This train looks a bit too seedy for a Warrington one!" she declared, which made me wonder where the posh part of Warrington was I'd not yet seen.  Lowe Angel?

Then, the lad behind me puked in the loo so a mad Asian dude on drugs tried to help him by hugging him tight, but at least this alerted his girlfriend who got some drunk French students listening to reggae to 'wake him up at L**ds' as he'd passed out by now.

Luckily for me, the only sensible man on the train, 'Trevor England', sat next to me and bemoaned a terrible day trying to get from Keighley to Glasgow and back and running out of phone battery.  I found him a plug, so he loved me after that, and rang his sister and 92 year old Mum to tell her not to worry, and went to spend the night on a bunk bed at Keighley-Oxenhope railway where he worked!  I didn't join him. Phew.

What a day.  Enough to put you off pub ticking for life, or then again, leave you champing at the bit for more!  Month end review tomorrow.