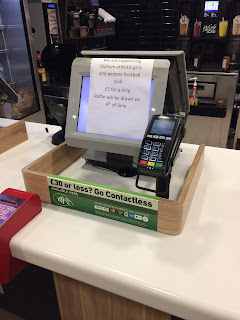 So I'm on the 350 bus heading back from the chaos of Delph to Oldham, and even then, a man in hi-vis stops us to divert the bus down a different road.  "Noooooo, THIS IS MADNESS!" says an outraged woman behind me.  I braced myself for some pot holed country lane not at all suitable for buses and breathed in, but it was just a normal road and nothing happened.  I think she was the woman who Gordon Brown called a bigot.

My first Oldham pub was happily along this main bus route back into town.  Now having been to as many pubs as I have, it takes a lot to intimidate me but this dark forbidding looking Marstons house with outdoor smokers and a huge black crow outside spooked me a bit.  A wolf howled from the moors, though I couldn't hear it. 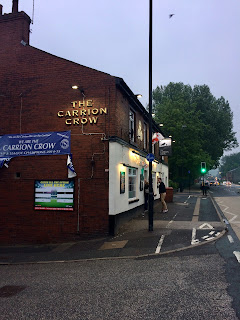 At the doorway, a man in hi-vis (a theme of today) blocked my entrance, blew smoke in my face, and grinned a toothless smile at me.  When he let me past, I thanked him profusely (for what exactly I'm not sure) and he even had the temerity to say "you're welcome pal".  The bar area was a hive of Oldhamites swarming around, whilst hardly any seats were taken in the wider pub.  A bloke turned around and said 'arite', this was one of those places where you must tackle it head on and look everybody in the eye to survive.  A bar-boy smiled sweetly but made no move to serve me, I actually suspect he was underage.  A new barmaid was learning the art of pint-pulling and was struggling with the latest module "Topping Up".  This all led to a chaotic "is anyone actually serving?" scene.  Finally, 'Topper Up Tutor' and large hipster beardo (not a hipster Peter Beardsley, that'd be a horrific concept) saved the day.  There was a Marstons beer festival on, well about 12 beers over 3 days from non-Marstons breweries.  The person who'd vacated my table had ticked off Holts and Wadsworth #pubman, according to the 'beer menu'.  Can't remember what I drank but it was the only pint in Oldham I was to enjoy tonight!  In the loo, I bumped into my hi-vis friend again.  We nodded like old friends.  At least I didn't thank him.  "Oooh Matron, look at you with your long beak and your black plumage, all puffed up!"  You know what that is?  That is a 'Carry-on Crow'.  I decided not to try this line out on the locals.  Quosh, Martin Taylor and Cooking Lager all 'liked' something on Twitter at the same second.  This caused my phone to form a green and red tartan background and crash.  It was very odd.  Like this pub, which looking back now from the safety of York, I quite enjoyed. 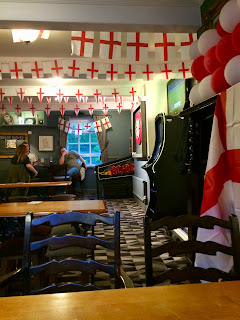 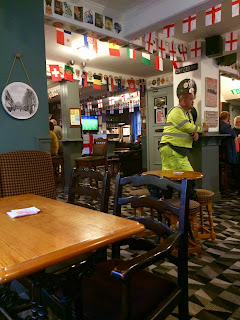 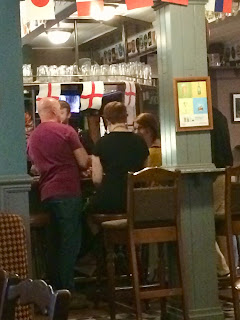 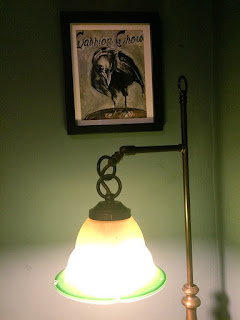 It was time for the 20 minute march back into Oldham Centre where the other two pubs were. 9pm Friday evening in Oldham, I was a little bit anxious, but the streets were surprisingly quiet.  A bit like being in the eye of a hurricane, occasionally a group of loud drunken tweens would appear out of a back alley just when I'd thought it safe to relax, only to fade away into oblivion again.

I should've brought a pair of scissors.  No, not for my own protection, but I was trying to extract a 50p off voucher from my sheet, for my next pub was a 'Spoons, and of course, they STILL haven't perforated them ...... 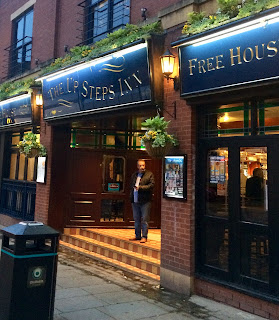 So how many steps do you have to climb to get to the bar of this Wetherspoons?  Well, less than two and a half.  Are there really so few famed Oldham residents and inventors that this is what they have to resort to?  Probably.  Or just an in-joke?  I was expecting a chaotic booze fuelled Victorian gin palace-esque atmosphere and it promised so much early on, when I did actually have to go 'up steps' to the loo, though this is hardly unique in 'Spoons.  An apologetic Welsh man was crouched down next to the hand dryer, arse in the air, explaining it was wet and needed drying.  His moustache and terrible taste in jumpers just made the scene that bit more ridiculous.  Obscure reference but he reminded me of Tobias Funke from Arrested Development.  But this was as entertaining as it got, apart from an old man with green trousers I approved of, for this was sleepy dull 'Spoons rather than Wombwell, Maltby and the like with their electric evening atmospheres.  Most ales were from Elland, a brewery I came to love during my West Yorks ticking, but this one tasted strangely metallic.  I noticed this when I first came to Oldham (well Royton to be precise) but this is one of the few parts of Lancs where people just don't smile.  Carrion Crow had offered something of an hi-vis painted olive branch, but this and the others including Delph were quite moody.  And when you get that type of crowd in 'Spoons plus poor beer, there's not a lot left! 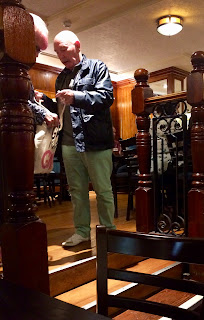 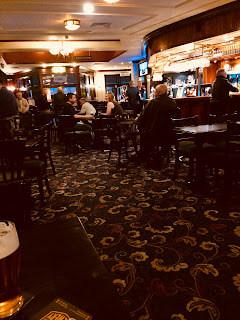 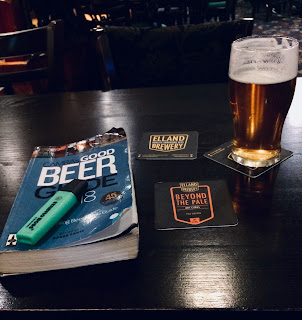 One thing had become clear during my boredom.  At 10pm on Friday with still one more pub to do, I'd not be getting back to York til 1am best case scenario, and needed to be up at 7pm to come back over this part of the country!  It made no sense to go home, so I booked an impromptu Premier Inn online.  It said Oldham Central - it really wasn't - but am sure I'd done the right thing!  Now I had more chance of enjoying my final pub ..... 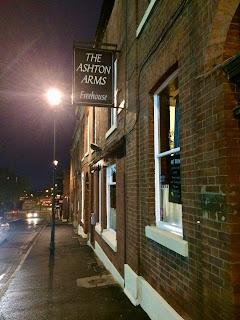 There was something very 'lived-in' about this pub that I noticed from the second I walked inside and walked up into the raised bar area.  Bar man was very attentive, but again locals were looking wearily at the outsider.  So I'm a little bit torn between calling this a 'cosy comfy community local' and a 'shit tip dive'.  You ever been to the Crispin in Wokingham?  Well, a bit like that but green rather than red, better staff, and slightly more 'knowing'.  The smell of chip fat grease lingered in the air, even though the pub deep fat fryer was decommissioned in 1981.  My ale had flavour, but was tepid, but a glance around me suggested a pint of ale hadn't been pulled in here all evening.   I sat next to huge fireguard, so rusty, I could feel tetanus coming on just by looking at it.   It was a pub you could feel wrapping around you like an evil octopus with a fungal infection, but it kind of gently stroked you and held you there.  Jeez, my pub descriptions are getting weirder, but if you go, you'll know what I mean.

I grabbed a MaccyD's as I couldn't see anything else open, and walked the 25 mins to the Premier Inn where the man told me "Ah, Mr Everitt, we've been expecting you" in a half Russian, half Oldham accent and checked me in as the final customer.  At least this took the pressure off tomorrow, as I had one aim in mind, to finish Cheshire!  Join me for Part 3 Tue or Wed.