Saturday then, and time to add to my April pub haul of 28 for a final time.  It was also chance to put another nail in that Cheshire coffin, my 5th last pub to visit in this year's Good Beer Guide.

York station was on top form early on, you know that awkward feeling when you're the only one who forgets your clown outfit but joins in anyway? 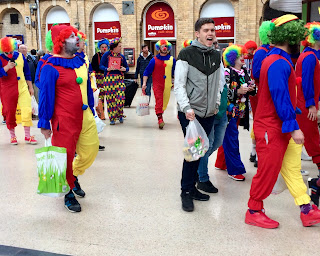 But before long, I was in new territory in that sliver of England just south of the Wirral but above North Wales.  The train arrived in Neston at 11:45am, where I had a good 50 minute walk south to the 'key' pub of the day.

Little Neston felt, at first glance, like a friendly little housing estate like so many others (but with added cyclists).  Knowing recent Cheshire visits like Daresbury (Daaahsbury) and Davenham (Dave-un-um) Little Neston is probably pronounced Lil' Nostril, but I never got chance to find out.

As I turned the final corner, where a young boy was playing a game of fetch with his excitable mutt (both ran off back to their mud hut as soon as they saw me), the pub came into view, with amazing views of the River Dee and probably a woman being sick outside Flint Wetherspoons. 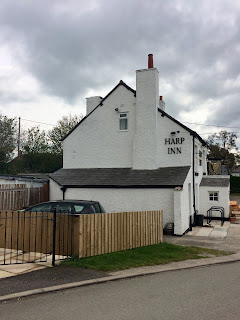 I didn't take for granted the fact that it was open after recent events, but it was, and I stepped into the kind of traditional gem I'd been expecting, all beams and nautical & local decor, more a pub you'd go to drink than eat.  And you can't ask much more than that in 2018.  I was greeted by an interesting scene, as a lively barmaid was apologising to two locals for her accent - half Dutch, half Wrexham apparently.  "I met a man with a Dutch daughter and she was a very nice girl" one of them reassured her, before they had a very staged but serious conversation about daffodils being a cracking flower.  I could only stifle a laugh (as could she) as I ordered by Peerless something or other and took it to the corner.  True, her accent was as close to Jan Molby's legendary Scanda-Scouse as I'd ever heard, but she didn't look like him in her defence.  Before I knew it, two ladies had come into the other bar asking about food. "I must firstly tell you ...." she warned them ".....I'm half  Dutch if you don't understand my accent!"  Jeez, this girl had it bad.  A trio came in, and the man, another local friends with the Dutch sympathisers, wanted a Balti curry.  "Ask her in the kitchen to make it as hot as possible!" before the blind lady did her impression of the 'Jaws' theme speeded up and how it loses suspense and terror.  So, a cracker to start, where the character of the pub matched the characters within.


The plan now was to get back towards Neston station, and do some pubs on the Wirral.  But if a 50 minute walk back wasn't bad enough, I'd realised Raby (the next nearest pub) was still closer to Neston station than Heswall, so I carried on walking, which amazingly for the most part was suitable for pedestrians, only a dodgy little "breathe in for oncoming traffic" bit just before the pub.

I'd obviously walked in the back way through the car park, as there was no inn sign on the building, but that just made the entrance that little bit more exciting, in case I'd just walked into a house.  But not many houses have 'gents' in corridors so I think I got it right.

It's quite nice walking in the back door and nodding at people nonchalently, you can almost convince yourself that you are a local and know all the shortcuts.  I eyed a few diners with the kind of surety that comes from visiting 2,080 GBG pubs, and swung a right to the bar and ordered some pale muck from Brimstage named after a bird.  A sinister looking bloke with shorts and open legs swung his stool around so he was facing me (there was something almost Sharon Stone Basic Instinct about it), which intimidated me into struggling to locate the correct change - it was a delightfully dark pub which I always approve of.  The short haired barmaid was patient and pleasant, understanding my struggles - the feeling of being a local hadn't lasted!  I walked back into the pubbiest room and was eyed as something of an interloper, the only seat available being a perched stool facing a wooden screen.  Despite the amount of food going on, the pub got away with it with it's nice tiled floors, wood burner and all round ancient feel.  The GBG tells me this isn't 'manufactured ancient', as we had a pub ghost called Charlotte and a 1611 fire to 'prove' it!  Seriously though, you could feel the quality.  The wood burner wasn't needed in my opinion, but not many people had built up the sweat I had, and not only had my Mum and Pub Curmudgeon claimed it was a chilly day, but a punter later said the same thing.   All that was left to do was mildly observe the blonde Mums and daughters quartet, a woman with loud trousers (I approve) who couldn't keep still, and a fake Harry Gration who kept spinning around on his chair like the bloke at the bar (Harry Gyration?)  I felt a bit like a neglected antique left on the shelf, not dusted in years, til someone from Antiques Roadshow comes along and realises the true value it possessed.  But isn't that the life of the poor pub ticker?!  Sob. 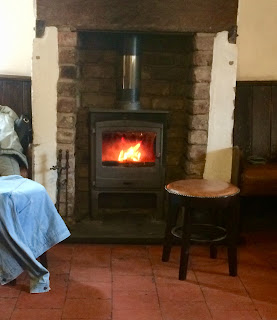 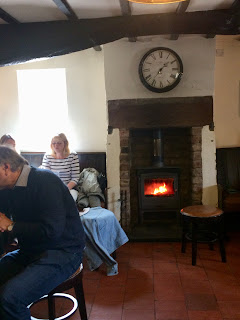 Back out in the car park with phone signal, it was time to plan my next move.  Thornton Hough looked close, and it kind of was, problem was the pub was through the village, all the way around to the other side - AS IF my walking hadn't been hard enough today.   But on the plus point, it was only 35 mins and there was a pavement!  Thank goodness for small mercies.

As I realised the pub was set back from the road 'in its own extensive grounds', my recent trip to Worsley popped into my head.  I saw the grand huge frontage and a few poshos going in.  The warning signs were there, but I still hadn't thought "hey, could this be a Brunning & Price?"   How dim am I?

My dimness continued into the pub.  As with the Wheatsheaf, the loos were on the way in so decided to go now, where I acknowledged their grandeur and vaguely smiled at some 19th century cartoons.  Up a few steps and a similarly grand building with shiny bar was infront of me, though I had to avoid a twog's tail wagging so vigorously, it nearly tripped me up.   Above the bar, masses of red wine bottles lay sideways in wine racks.  An attractive barmaid with zero eye contact hopefully due to busy early afternoon swell of people wanting food served me briskly and efficiently.  The ales were listed on mini blackboards.  And yet still, nothing was twigging in my simple brain.  I turned around to see a huge table unattended.  "Perhaps they have just left and I've been lucky" I thought to myself, and sat down.  And it was only when I reached for a beermat, and saw the Brunning & Price ale description, that I realised the truth.  All the hallmarks were there.  I felt ashamed!  Eventually, a girl in a bobble hat (not B&P dresscode I'm afraid buddy) says to me "I assume the table of ten who had this reserved 15 minutes ago haven't arrived so can my party of five join you?" she said.  "HUH?" I replied, totally blank, and before I knew it, two lasses, two lads and a very B&P dog which knew no boundaries had joined me, managing to totally ignore me which was both good and annoying.  I should mention before this how friendly and smiley all the clientele had been - take that Worsley!  Even the 1980's radio DJ bloke at the bar nodded respectfully, and if it wasn't 2018, he'd probably have a young girl sat on his knee and been too busy to acknowledge me, so you can see how times have moved on.  Brunning & Price pubs are also a product of our time, but they do amuse me in a "you've gotta laugh or you'd cry kind of way".   As they go, this one was a fine example.


As at the Wheatsheaf at Raby, I found a picnic bench outside (in the "extensive grounds") and suddenly realised I was not only 3 miles from Heswall station, but I was also 3 miles from Barnston.  Ugh, I vaguely considered taxi or bus, but in the end, decide to go for yet another longish walk.

Still three pubs to do, time was 'ticking' (haha) on.  But it'd all be worth it to get some more pub ticks in.  Join me tomorrow for news on them......