So where were we?  Yes, deep in the South Cambridgeshire countryside with the venerable Martin Taylor for company.  We'd just been failed to be wowed by GBG mainstay the Queen's Head in Newton but happier times were around the corner.  And the other corner.  And down a country lane.  And another one etc etc.

Crikey!  If I think back to my formative BRAPA days, I remember once standing in my kitchen with a laptop in the dark back in 2014 spending about an hour trying to work out how to get to the village of Abingdon Piggots from East Bedfordshire strongholds like Dunton and Wrestlingworth.  It was impossible.  Little did I know back then, a man who probably isn't an axe murderer would volunteer to drive me.

I was so dying for a pee by the time we arrived in this picture postcard village with colourful thatched houses that I opened the car door before Martin had even parked up (I didn't go though!).  After chuckling at me and then partaking in the obligatory BRAPA photo outside, Martin then wobbled after an old bloke to hold the door open for him whilst his own trousers were falling down.

This was the most life Ab Pig had seen since July 18th 1744 when a sheep escaped from a farm, relocated itself to Litlington, and refused to return home.  The villagers hate each other to this day.  Did the pub know what it had let itself in for with us two?  Of course not.

This was more my kind of pub.  Okay so the locals were every bit as 'silver spoon in mouth' as their Newton counterparts, but this place felt old yet kind of 'real cosy pub' as well, not like being in some Beamish style museum piece.  Carpets, deep red colours, fires, beams, inglenooks, even the 'piles of logs sitting there not serving a purpose' were hard to dislike. Though I'd chosen a guest beer before I went for my long awaited toilet break, Martin displayed his true #pubman credentials, asking the barman which ale had last been pulled through, so I was presented with a crisp London Pride instead, and bonus bag of scampi fries, equally crisp haha (sorry).  Such things will be taken into consideration when the Year End Awards are decided on 31/12/18.  Have you contributed to BRAPA in such a way?  Maybe you should.  You won't win an award, just the happy realisation you've done well.  We'll call it altruism, or something.  Martin took me back to the loo (not as dodgy as it sounds) to show me a fluffy owlet nesting in a toilet door, not a real one but the kind of detail I might have missed.  I'd built this pub up in my mind, but now I can sleep easy.  Another GBG regular ticked off, and attentions can now turn to my Huntingdonshire (as if that's a real county) trip next time out.


Away from Cambs, there was plenty of time for more pub ticking.  We drove back into Royston (Hertfordshire).  It was that hazy time of day when only a 'Spoons would do.

Quite light and airy for a 'Spoons, it had that classic quirkiness you'd expect more from one in somewhere like Rochdale or Maltby.  They showcased their locals in a series of side rooms, each like a little theatre production you could step in and out of, as if placed there for your own amusement.  There was almost something peep show about it (not David Mitchell or Robert Webb), but a bit less sexy but just as seedy.  I was 'feeling it' a bit by now anyway, and this combined with the reality of the situation made me feel a bit like I was in a Lewis Carroll novel, certainly more so than the Looking Glass in Warrington.  The staircase seemed sinister too, and you couldn't walk up or down it without an old person with the face of a rabbit making an amusing rhyming comment as they let you past.  I could tell I was starting to waver, as even though I was fully aware Martin had just sensibly ordered a coffee, which he had to go and get himself from some sentient machine, I still insisted on trying to pay with a Mudgie voucher, my last one for this quarter as it happens - so I still have one left to use in my next predicted 'Spoons, which may even be the Hain Line in St Ives, and I ain't even talking about the Cambs St Ives!


Martin left me, worried he'd left me in slightly worse for wear condition, and I took the 10 minute stroll back to the rail station.  Ten mins direct, half an hour for me.  But this was standard 5 pint feeling, and after a loud blonde girl made the London train reappear on the scoreboard by shouting a lot, I had two Juicy Waters, 8 cheesestrings, 5 chicken bites and a bag of mini cheddars, and by the time I woke up at Kings Cross, I was feeling fresh and ready for the late afternoon / early evening session.

Okay, I only had £2.50 loaded on my Oyster Card but it was just enough at this stage.

I had just the three Central London pubs remaining, two close together, so seemed a good opportunity to crack on.  I 'alighted' at Great Portland Street, and finally went to a pub I'd promised I'd do on about 6 previous trips and never quite got to it ....... 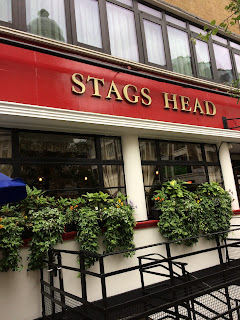 Despite the exclusive address, I thought this place looked like an estatey pub doss-house, the sort you'd have free bread & dripping in with a pint of Tetley's with yer Grandad in a ridiculously smoky atmosphere in South L**ds in the 1980's.  That actually sounds quite magical mudgical doesn't it?  Well. Anyway.   Inside, I was delighted that the pub had a dark understated comfortable feel, putting me in mind of the Calthorpe Arms at Bloomsbury and very few others in London.  Quite friendly too, but despite my recovery, I wasn't ready for an ale like this.  I tried to go local, something called Think Tank from West London.  Hops so chewy, I've had smoother steaks!  I leaned on the side wall admiring all the flags hanging from the ceiling.  Geared up for the World Cup a bit early aren't they, I thought, but then I remembered it was Eurovision tonight, so maybe it was that.  But are Peru in Eurovision?  Well Australia are, so probably!  If cask beer in Central London is enough to make the locals want to 'embrace' every style of drink under the sun, then the interesting folk of London can always be relied upon to make the ale more palatable through sheer amusement.   A lady had a 'head' on the table with her.  Was she a medical student/lecturer?  Or was she on a date with it?  I got my answer when a real human head arrived on the end of a human body and the poor 'head' was made to feel like the gooseberry.  Is it wrong I had so much empathy with it?  We've all been there.  The ale went down better after this, and as the lady and man left with head in tow (so it wasn't an amusing pub prop like the 1999 Good Beer Guide), I left aswell. 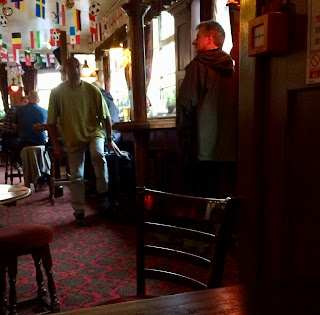 Time for one more then and break my six pub rule?  Absolutely.

I thought I'd found it but realised it was the wrong door, jeez, spending too long with Martin was obviously having an effect on me:

It soon appeared, as the rain started coming down heavily.  Hard to believe Thriplow was only a few hours ago ....... 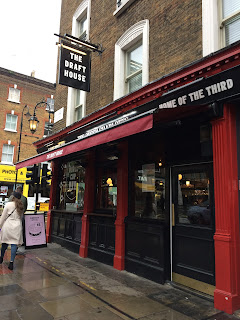 I'd heard a whisper that BrewDog were taking over the Draft House chain, so I wondered if this had any impact on their GBG entries?  Will they keep selling cask and continue to get in the Good Beer Guide?  Because my one remaining Central London tick is also a Draft House.  I'll probably do it anyway, still 3 months to go n all that, but is it worth it?  Anyway. this place.  Quite small and heaving with a hubbub heavy young crowd.  For once, I let the barmaid give me tasters of various ales as she so wished as I was trying to buy time, hoping a table would become available behind me.  It didn't.  EVER!  I resorted to standing under the awning in the rain, by the smokers, where I took a picture of a sign and an Irish man shouted "stop taking pictures and drink ya beer!"  It was sound life advice, even if I did mutter "bog brained Murphy twunt" under my breath at the time.  I went back inside, drippy and beaten.  The already smug clientele stared at my forlorn drippiness like you'd look at a stray cat ready to be consigned to South Cambridgeshire Pet Crematorium.  I tried to prop myself against a wall, but it was actually a side door and I got whacked in the arm.  This wasn't a lucky place!  Signs kept saying "Home of the Third".  Do they mean it as in, "a pint, a half, a third" cos pretty sure they didn't invent this?!  I was glad when I finished and could slope off back to the grimy North where I belong.

I got myself back to York with little further incident, though I did get cross with an 'Upper Crust' lady in Kings Cross station for not putting "The Italian" on.  First world problems and all that!

I was back in time for Eurovision voting, and Peru didn't appear.  So now we know.