So where were we?  Ah yes, escaping Leigh on a hot Saturday afternoon.  Any bus would do, but the bus driver had other ideas ......

In comparison to recent walks around the Wirral and Runcorn, 20 minutes really wasn't too bad.  This was a pub I NEEDED to do with a capital 'needed', having walked (with Tom & Dad) a long way only to find it closed for a refurb two years back, something the current GBG happily alludes to (the refurb, not my failure to get in!)  The current GBG also tentatively claims the refurb hasn't ruined the place ..... always a bad sign. 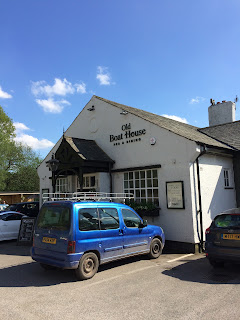 Sure enough, "pub & dining" written below the pub sign was a sure sign of their new intent, and I preferred the look of the ramshackle old closed thing I'd arrived at in July 2016.  Still, canalside location, what can you expect?   Inside, my fears were realised as the punters were of that 'I'd rather queue than observe proper pub etiquette' breed, staff were lethargic, and despite the fact everyone was taking advantage of the weather and canal leaving the pub empty, almost every table was kitted out with knives, forks, menus etc.  It put me in mind of the Barn Owl at Agden Wharf, without the wonderful carved grizzly bear!  Like that experience, I couldn't bring myself to drink indoors, despite my new self enforced stricter rules and drinking my pint inside the pub to get a better feel for the place.  There was no feel to get here.  Happier outside then, and lucky for me, I stumbled upon a separate, more private outdoor area, away from the canal, with just two picnic benches.  One had just come free, so I said hello to a friendly young couple (he hated going to the gym, she sounded like the cadburys caramel bunny crossed with Philomena Cunk) and sat down, baking in the sun with my pint of Robbos.  If I was worried being out instead of in would lead to less 'amusing pub drama', I was wrong.  A little dog with no fur, apart from a little fluffy grey mohican, ran up, drank from a bowl, and ran off up the grassy bank, presumably under the wheels of the lorry passing the road at the top.  A few people had their curiosity aroused by this peculiar arrival, all looked pityingly at the creature, but no one dare claim it.  Poor thing!  A stray?  Or were the owners simply too embarrassed?  And apart from two biking girl twilds and some bint plonking her strawberry gin on my picnic bench without so much as a smile, not much happened here after this.  It didn't take a lot of imagination to picture an old fashioned locals pub of recent yesteryear, but I doubt those days are coming back.  Oh, and because of the change from the brightness of the outside to the dark indoors, I couldn't see and pushed a wall thinking it was the door out!  Summed it up.  NOT worth the wait really. 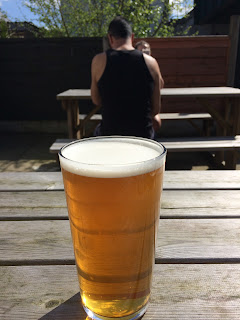 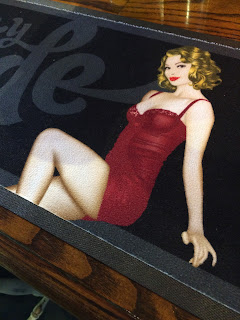 My longest walk of the day took me into Tyldesley, which I knew was possible, because I'd done the walk in reverse two years ago.  A bit back-breaking in the circs, but with a different GBG entry to the rather spectacular Mort Arms, today seemed to be the perfect time to do it.

I was sweating buckets when I stood at the bar of the left side room, peering towards the busier right hand room wondering if they knew they had a customer.  I waited.  And waited.  And wondered if there was a bell I could ring.  And still nothing.  I looked around and an honest looking bloke with a reassuring snout and a gravity defying head on his Carling nodded at me sympathetically.  He could feel my pain.  Eventually, a harassed looking barmaid ran though.  "Kayleigh, Kayleigh luv .... can you serve this young man, he's bin bloody stood here for about ten minutes".  But even this didn't work .... "I'VE ONLY JUST COME ON SHIFT AND I'M REALLY WARM AND I'M NOT SERVING YET!"  wailed Kayleigh.  "Really sorry Kayleigh luv" our hero replied in a small voice.  "Thanks for trying" I said to him.  A minute or two later, about three members of staff tried to serve me all at once.  I'd forgotten what beer I wanted by now!  But £2.20.  Bloody 'ell, this had been a cheap weekend (so far) but this was the best yet, wonderfully down to earth part of the world this Atherton/Tyldesley area, I've always been a fan of people and prices.  Kayleigh was back, and seemed to be glaring at me, was I guilty by association after the earlier incident?  The room then filled up and friends of our snouted chum joined him for the football, along with a few families and 18 year olds worried they'd be ID'd.   "Sam Allardyce deserves much more respect" claimed our snouted chum, "just loooook how many clubs he's kept up".  Hmmm, the assembled crowd gave him the verbal equivalent of a pat on the head.  Kayleigh finally smiled and rolled her eyes at me after one of the old blokes called her a tramp (in a nice way .... errrm I think!) Good community pub this.  But preferred the Mort if you put me on the fence. 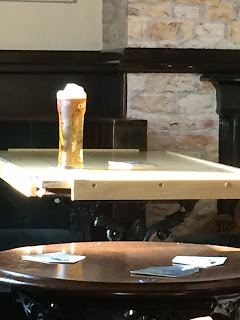 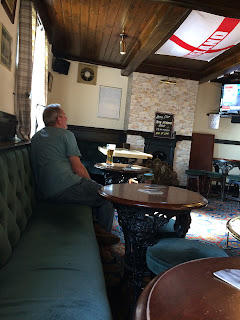 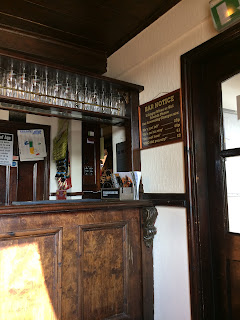 Another decent trek, this time into Atherton, followed.  Aim was the get the train back to Manchester, where I could change for York and still have a relatively early night before my London trip.

WRONG!  Something had to go wrong of course.  And 'rail replacement bus' are the saddest words in the English language.  One delayed by 50 minutes is even worse.  Though miraculously, I got into Manc Victoria with 4 minutes to leg it for the final direct train to York.  Knackering but so glad I made it, another walk to Piccadilly would've just finished me off.

During all this mayhem, my Hull City buddy Ben was already in London, and he'd collected a stray in readiness for tomorrow .....


After a bit of scran and a troubled night's sleep, I woke to find myself another year older (uggggh, when will I learn?) and Dad popped round and we jetted down to London on the train.

One speedy tube trip later took us to Acton Central, and a short walk found us at a Spooooons, those oh so reliable GBG earlier openers even on a Sunday. 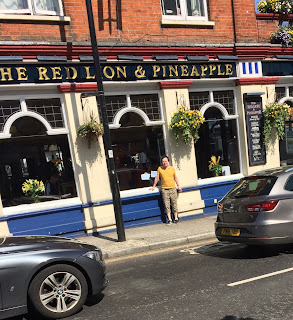 Ben & Tom were already in the window just behind the picture of me above, and you might be able to see them if you squint!  I got to the bar (with Dad's money and a trio of Mudgie Vouchers - happy birthday!) where an irritating Brentford fan hippie eco-warrior had finished parking his bike, was enquiring over Veggie Breakfasts, and probably asking which of the ales didn't have fish guts in.  Ugh, I know this is West London but even so, you're in 'Spoons mate, show some decorum.  3 pints for under £6 then (hold that thought for 'part 4' of this blog) and we sat down in the sun to some top chatter until Tom confessed what with the 12:30pm kick off, we had to get going soon - and here was me & Dad thinking we were just round the corner from Griffin Park.  Ugh.  We squeezed an extra half in but watching Hull City this sober was surely not going to be pretty.  This was a good version of a Wetherspoons, nice relaxed feel, happy, light and comfy. 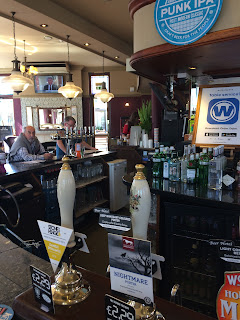 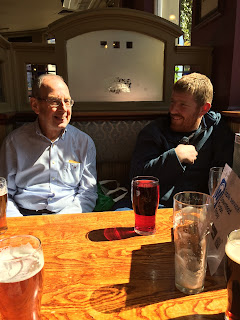 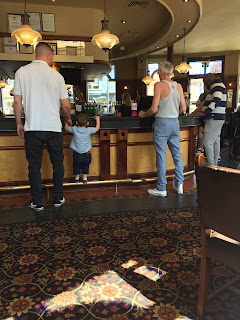 Join me on Sunday in Part 4 for all the news on our 4 post-match pubs.  But first, a trip to Cambridgeshire.