BRAPA - A Cheshire Twap and a Stockport Two (Part 2/2)

I don't think there's a pub in the Good Beer Guide I was less enthusiastic about visiting on paper, but a tick is a tick is a tick.  Whether it is a modern sounding 'Tap' in Alty, or the Blue Anchor in Helston, they all count as '1' at the end of the day, when the scores are on the board etc etc.

It was with this attitude that I shaped up to take the photo only for a Des Tutu lookalike to accost me and ask whether we were on Railway Street or Stamford New Road.  After much zooming in on my phone, I assured him Railway Street, though he couldn't fathom how walking along the same street, it could change into a road of a different name.

What more could I say.  Oh Altrincham, why do you insist on punishing me like this?  I wanted him to pose as the frontage was predictably drab, but he'd long since sped off. 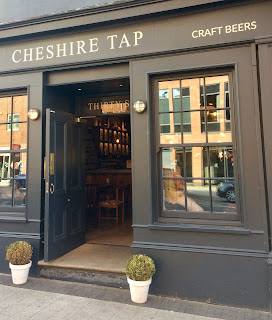 I was met with expectant, almost pleading looks from a series of pained looking middle aged and older men.  What was all this about then?  I'll tell you.  The BRAPA kit-man had been reinstated and done his job, and I was once more wearing the 'red' home kit.  With the Cup Final blaring out of a series of screens most of which were positioned strangely behind the bar, a quick glance and I looked like a Manchester United fan in this very 'United' pub.  But the BRAPA bit confused them, was this some middle eastern oil company who'd sponsored their heroes without them realising?  As one old bloke realised I wasn't one of 'them', his wife clutched his hand in a 'stay strong' gesture as tears welled up in his eyes.  The bar was long, thin and wooden, I was relieved it wasn't a micropub and despite the typical GMR 'half Eurobar/half tiny Brunning & Price' effect, it wasn't as unpleasant as I'd feared, and one of the better pints I'd had today.  No one smiled, especially bloated 'Xander Armstrong and Harry & Meghan, seemingly having a break from the madness of Windsor but not even standing at the bar together.  A little dog was almost baptised in premium lager.  And you know you are in a Man Utd pub when someone shouts "Ashley Young is just SO good at winning that type of decision" when he's dived for the 15th time in a row.  In truth, I sat around a corner so I didn't get embroiled in the boring game and could people watch, much more fun.  The place smelt of coffee which surely was wrong, unless someone was trying to keep themselves awake. 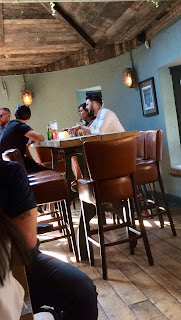 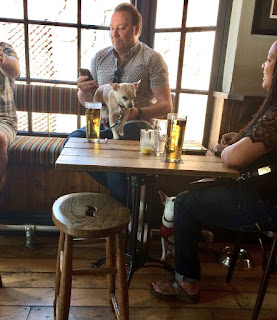 There was only one sensible place to stop now for pub action between Altrincham and Manchester, and that was Stockport.  I had toyed with the idea of befriending a homeless person and asking them to join me for two pints in Marple just so I could call my blog 'Beggin' Marple' in honour of the wedding day but it seemed a bit extreme.

Do you know what else is extreme?  Pubbing in Stockport, though sadly I hadn't given the Pub Curmudgeon enough notice but Heaton Norris is on my agenda for a summer Friday soon so watch this space.

Tonight I'd see a different side of Stockport.  Before Saturday, it's always made me think Liver n Onions in the Tiviot, weird Twin Peaks gurners in the Pineapple, balancing an OBB on a stool by a fire in Boar's Head, moaning Man City fans in the Crown or a pint of Old Tom in Swan With Two Necks whilst staring at a weird rooflight and a dying man.  But now was time for the 21st century, and it still managed to do it really well which I actually almost find annoying! 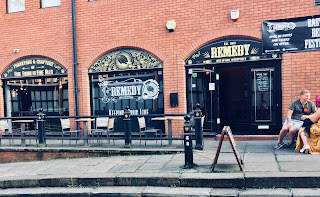 You see what I mean?  Sounds shit, looks a bit shit, followed in a 70 year old prostitute with fag hanging out of her mouth teetering on platforms, and yet it still manages to be a great experience!  Even the beer wasn't that amazing.  Hard to know what style they were going for, but comfy armchairs and freakish art work gave way to a modern bar area, with brewing equipment showing through the glass.  A bit like Sheffield Tap crossed with Victoria in Birmingham City Centre, with a bit of Drygate Glasgow thrown in just to drag it down a notch.  A woman propping up the bar who looked like the twildcatcher glared at me like I'd escaped.  I ordered the only Remedy beer I could see, a stout.  'Unfined'  (as if I'd be able to tell!)  "THE STOUT? .... THAT ONE THERE?  REALLY?" said the barman as though I'd made a mistake, he didn't trust their own ale, or perhaps like so many, he thought in warm weather, stout will never sell.  Which is why I make a point of drinking it on hot summer days just to be contrary!   Two blokes with crazy hair appeared from the brewery side.  The brewers?  Or members of a Scandanavian metal band?  It was hard to tell.  But both smiled and appraised my pint as it slowly disappeared as if to say "Living Proof that Dudes can Drink our Beer and Survive" (which incidentally is track 8 on their debut album 'Stockport Stockholm Syndrome').  A steady stream of young punters came in, plus thankfully a grey Louis Theroux who proved to be the Twildcatcher's new focus, for she eyed him longingly.  As my barman and the two rockers taught a young barmaid how to 'bang' tequila properly, I realised I was properly in the midst of a Saturday night out and it was time to move on, or die!   But just time for Martin Taylor to remind me to go into the loo and admire the Manga artwork, which spoke to me in a pubby way. 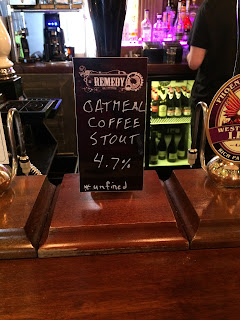 I somehow got lost on the way to the next pub even though I reckon it was pretty much on the same street visible from remedy.  But I did see one I'm sure was in a recent GBG looking a bit worse for wear so glad I dodged that one. .......

Pub Curmudgeon had told me of the next place "good luck in getting a city on a Saturday night .... mega lolz" (I paraphrase him slightly) but as I approached in the Stockport sunset, my initial feeling was that he was going to be right ......

One thing was clear, this wasn't going to be the grimy backstreet boozer I'd expected in my mind's eye, but an altogether more fashionable square high-ceilinged effort with racks of wine hanging from every upper orifice, like they too had been on the phone to Messrs Brunning & Price.  But best of all, everyone was outside enjoying what was left of the sun and the warm air, so PLENTY of room within.  As my sister once said of outdoor pub drinkers "like flies around shit" and although the pub wasn't shit, you can see where she was coming from.   And those who were inside seemed to be attracted to the spotlights / candles like stupid drunken moths (no offence Mr Mackay) so I had plenty of room.  Not that service was that quick, I still had time to think "ooh I'll get a Unicorn cos it is 'tradition'" before remembering that's my Preston tradition, so I could actually drink what I want!  So I had a Nottingham Brewery Bullion and by gum, strike me blind.  Pint of the day by a mile, and one of my best this year, absolute nectar.  Who'd have thought it from a place with such dodgy acoustics and gin love?  I turned to see two women trying to engage a 50's jukebox in conversation, presumably not used to seeing one of such quality, and had mistaken it for an alien being.  I managed to get a prime position in a slightly raised area all to myself, overlooking the whole pub.  The 'Remedy' crowd started to appear one by one, including Stockport Catherine Ryan and friend, 'The Woman in White', but I remained undisturbed, even when the lairiest man started a 'Sit Down' by James singalong and demanded the whole pub join in.  They actually did, I did!  The man who served me seemed to be turning into Kid Creole, and kept boogieing past me and winking, though I'm not sure where his Coconuts were (no, don't Russ!)  In the loo, a man was drying his groin on a hand dryer with some ferocity.  "Spillage!" he barked bitterly at me with an air of regret.  A pub that had no right to be so good.  Wonderful.

And how had I remained sober and focused throughout?  Was getting hammered on Friday night good for me?  Or was it the two litres of coconut water (hipster me!) I drank from Northwich Aldi?

It was the first time of the big train timetable changeover, and chaos struck in L**ds when the driver didn't arrive, although they changed the excuse to "trespassers on line" which was a pointless and blatant lie as every other train was moving towards York.

I missed the one 5 minutes later because I helped two old dears with their luggage, and there wasn't room for me to get on!  Proof it never pays to be kind, I thought, but as I sat on the original defunct train, my sister randomly hopped on having been out on lash in Brighouse.  Serendipity!  A nice end to a great day ..... Cheshire ALMOST done, and the Greater Manc march continues.

See you Fri night for some more BRAPtastic action from the North West.