Am trying this again cos don't think the Twitter feed worked, probably a block on all Leigh related posts ........

Barmy and balmy.  That's how you could describe Wigan at 9pm on Friday 4th May.  Standish had been a success, but I felt it'd be back in Wigan where I'd need to show my true BRAPA mettle.  After all, last time out in the Royal Oak, I had one of the scariest pub experiences ever.

So when I turned the corner and saw a burly bouncer outside the pub glaring at two drunken ladies tottering past on ridiculous stilettos, you can imagine my terror ......

The bouncer looks me up and down, probably disappointed I don't have long legs and a tanned midriff, but eventually moves to let me through after one of the nervousest smiles I've given in my entire 2,088 GBG pubbing career.  But then to sum up the wonders of Wigan, I enter this cathedralesque cacaophony of mosaic laden pub beauty, and quiet too, just a few old folk tottering about.  I was gobsmacked.  So typical of Wigan, if you get complacent, it will give you a good kicking.  If you have written it off as a lost cause, it will do something incredible.  I can never relax in this town, it really is quite unique.  And challenging.  And for a pub blogger, places like this are simply the best, even if you are always one glance away from getting your head kicked in, you might also get a hug and a kiss, you just never know.  At the bar, my pint had the kind of name you couldn't say in a northern manly way, something like "snuffle punk" or "sweetie kittie".  I can't remember, but having to repeat it LOUDLY was very embarrassing.  I was asked if I was member of some cask club, didn't have a clue what he was on about, so he gave me a card and stamped it and I didn't have the heart to tell him it was a waste of time so accepted it with good grace.  Oh, and the beer itself .... wow, I rarely get excited by beer but the quality was just the best I've had all year.  How this pub has never been talked about in the same breath of Britain's famed and finest, I don't know.  But apart from a rickety stool that threatened to break under me, I loved every minute of my time here. 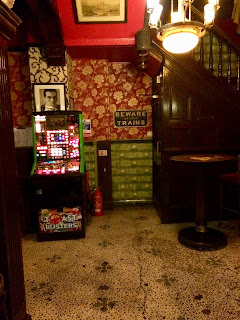 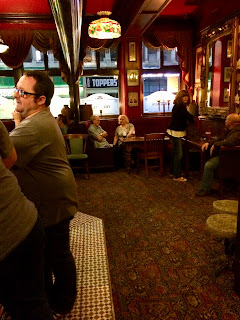 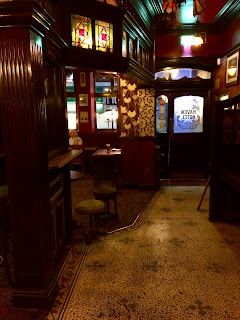 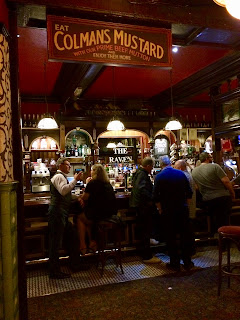 After the kind of Premier Inn sleep that Lenny Henry used to tell us about, I woke to another bright sunny day with the eventual vague aim of 'going home to York' so heading east.  Problem is, there were plenty of juicy pubby morsels hanging from the BRAPA tree between Wigan and Manchester, that haven't looked very achievable on a regular BRAPA 'after work' jaunt.

King Street and last night's puke was being disinfected as I walked to the bus stops across from the excellent Swan & Railway.  After 10 mins queueing with some stony faced wheezing old women on zimmerframes, I took the bus to my next nearest pub ....... 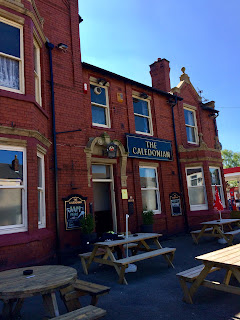 12:02pm when I gingerly asked the lady assembling parasols outside if they were open (the pub, not the parasols), as I didn't want to look to presumptuous and desperate!   "Of course luv, go in and I'll be in to serve you in a second".  I liked it already, I'd seen a Tetley sign on the roof from across the road of this old looking hotel.  But if Martin Taylor's amusing recent visit had told me one thing, it was that this can't be a GBG regular which seemed unusual for something with such worn bench seating and steady beer.  Of course, he's more of a #PubMan than me, as I erred for too long over the Tetley and instead ordered a pint of Purple Moose something that was farty, fizzy and not very good.  Am sure the Tetley was good, but even so, perhaps I'd just learnt why this wasn't a GBG regular!  More disturbing though, I'd walked into the huge lounge room and not only found it occupied, but occupied by two babies, a double buggy, three young blokes and a self confessed 'gobby' vaguely Geordie lass, who not only found it strange seeing her two male friends as fathers, wanted a baby herself but could not deal with being nine months pregnant.  "I nearly studied mental health", she later disclosed, "but then I thought they might realise I'm a bit fucked myself".  It was gems like this that made her both endearing and terrifying in equal measures.  The babies actually didn't make a noise in the entire time I was there, maybe they'd seen the many anti-twild signs around the pub and wanted to keep a stiff upper lip?  I didn't need the loo so didn't get to see the legendary johnny machine Martin noticed, but it explained a lot about this community local.  The type (like Egerton Arms, Salford) that you WANT to love, but somehow can't quite bring yourself to. 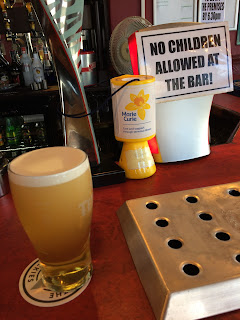 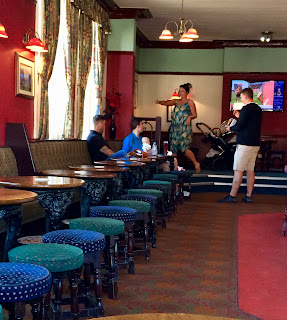 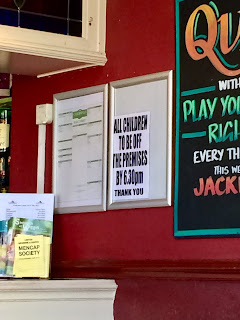 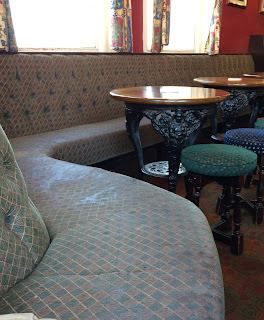 The bus stop was opposite, but the bus predictably delayed which seemed to be put down to Wigan Athletic's promotion party.  They were actually away at Doncaster but don't let little details like that get in the way of a good delay.

It was getting hotter, and I was sweltering by the time I reached Leigh, where I had two ticks to do, having done the dirt cheap bus station scroat-hole George & Dragon a couple of years ago.

Just down the road, I came to the self-proclaimed best pub in town and I had a thirst on ...... 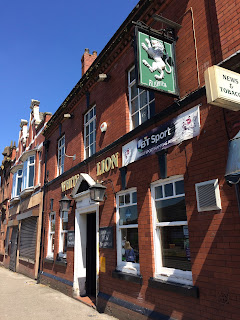 'UNDER NEW MANAGEMENT' screamed two blackboards at the entrance, as if I should either turn back now, or expect very little of the next half an hour.   I went in and two grizzly old turnips turned and glared at me - a look they held for my entire stay in the pub which often found me having to glance up at Stoke v Palace, yes that is how desperate my predicament became.  Before that though, the force of nature herself, barmaid Carol, served me a pint of ale from 'Abstract Jungle'.  This brewery strike the fear of god into me since a Stamford lady beersplained the brewery to me on a troubling day on the Lincs/Rutland border.  Every time I see a beer by them, I feel compelled to have it in case she is watching me from behind a nearby plant.  Carol, with her neckerchief, tramp stamp, and eyelashes was a very different type of publican, and she was the most uncarolly Carol I've ever seen but this is how our grizzly turnips addressed her from what I could hear.  My ale was slightly too cold, even though I'd wanted something refreshing in this heat, but maybe the date & fig porter wouldn't have been so ridiculous after all!  £2.40 a pint I may add, am sure beer was getting 20p cheaper with each pub that went by.  It seems to be a BRAPA quirk of nature that if I stare into the middle distance of a pub for long enough, something will happen.  So in a rare break from being glared at by the Turnip Two, sure enough, a bloke spilt his pint leading to ensuing chaos as Uncarolly Carol appeared with bucket and mop between her legs, as a colleague almost slipped in it, and everyone pretended not to watch.  I liked this pub.  In fact, I could see similarities with the Raven in Wigan, only a bit more chavvy and less ornate.

A short walk back down the street, through the outdoor bus station, across the road, skirting around the corner of Aldi along the side of a canal, and my next pub was to be found ....... 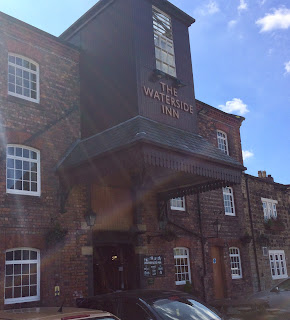 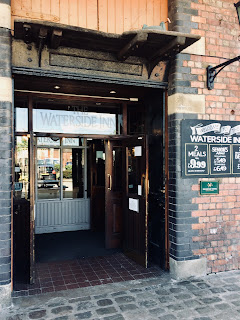 It might be wishful thinking, but I always expect waterside pubs to be like the Harp in Little Neston, but I should know by now, most of them a bland modern day cavernous holes with bored staff selling food, shit beer and serving a Jeremy Kyle audience, with outdoor seating up some cheap & nasty decking, perhaps a play area for twilds as Twum and Twad get sunburnt and pissed on lager as the handpumps get totally overlooked as the afternoon progresses.  And there you have the Waterside Inn ladies and gents, perhaps one of the most inept GBG entries I've been in over the last year, perhaps since BRAPA started 4 years ago.  Normally with Good Beer Guide pubs, even the dining places can be slightly redeemed by great beer and quality service, whilst some of the more average pints are at least served in 'proper' pubs amongst amusing friendly locals.  But I cannot think of one redeeming feature here.  Two handpumps were showing.  I asked for the one which wasn't Greene King IPA but once I was finally served, she told me 'it's gone'.  Yet didn't turn the pumpclip round.  My beer was probably about 20% head, when it came in one of those dreadful dimple handled glasses.  I didn't ask for a top up because (a) it was Greene King IPA (b) she was nowhere to be seen and (c) £2.20 seemed like a fair price.  There you go, cheap beer, a positive!  All outdoor canalside tables were taken up by a scuzzy crowd who couldn't control their kids or bladders, so I sat on a gloomy table geared towards dining between bar and outside.  And then people started queueing cos the staff just didn't seem to know what they were doing.  If this is in the 2019 GBG, I'm packing BRAPA up and moving to a mudhut in the Falklands.  Oh, and I left a third of my beer yet was somehow there 40 minutes.


As I headed back to Leigh bus station, things could only get better, right?  Well, we'll have to see in part 3 won't we?  It'll be with you Friday, bet ya can't wait!