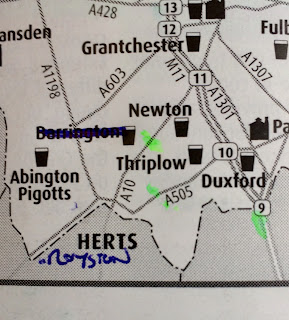 It was 10:40am, it was Saturday, and I was in the confusing Royston train station.  Why confusing you might ask?  Well, it is in Hertfordshire and not Cambridgeshire, not what any sane person wants to hear.  And it had two car parks so no-one had any idea where they were supposed to meet their chauffeurs for the day.

To add to my early sense of chaos, I was wearing the BRAPA 'third kit', the large green one.  A real rarity.  My 'home' kit was in the wash, the away retro Bradford one was at my Mum's.  The BRAPA kit man has been sacked, I'm pleased to report.

My chauffeur, pubman, nice guy and Cambs walking knowledge font, Martin Taylor, sped into the car park apace, gathered me up, muttered a few unintelligible Fenland niceties / insults and we were on our way to pub #1.

First thing we passed was a pet crematorium.  Significant because I'd been contemplating getting a BRAPA cat mascot to go around my pubs with.  And as you know, the only cat that goes where you tell it to is a dead one.  "Ohhhh please can we go and dig one up Martin, pleeeeassse" I pleaded, but we'd already missed the turning.

Duxford was our furthest point away but an 11 o'clock opener, so the ideal place to start.  Nostalgia for me, as we often came to the famous Air Museum when I was a Saffron Walden twild back in the late eighties.  Shame on myself for not nipping into this pub back then.  My two main memories are walking around Concorde (it didn't burst into flames, the engine wasn't on but that's no given) and having a massive nose bleed and an old woman (then sympathetic, now dead) looking into the car like she was worried I'd been beaten up by Mum and Dad.

27 minutes of fun then, I hoped, and to be honest, I was just happy that it was open.  If this was rural North Yorkshire, the landlord would have opened the door, stretched, yawned, and locked it again til 12 noon.  It's early days of Cambs ticking but I get the impression there's a lot of old fashioned pub tradition still scattered about the countryside.  This pub may have been foody to the left, but the right hand side (the better side of a pub in 76.8% of all cases, and that is a BRAPA fact) was pleasingly traditional.  The young barman was outwardly friendly, though there was an unsaid sense of "we don't recognise you, what are you doing here and what do you want?"  I think they were half expecting me to ask for directions, rather than a gorgeous dark Ram Tam from Tim Taylor's.  I'm not one of these Yorkshire nob-ends who take pleasure in ordering Yorkshire ales down south, but it made sense here.  To say the pub had supposedly been only open 3 minutes, a man in wellies propping up the bar looked like he'd been here all night.  Even more so, three local dominoes players, totally enthralled by their game.  Quotes included "I ain't won yet, I keep getting that cursed blank three", "Phwoaaaar, that's a good five" and "I've only been picking up sixes .... I've got so many spots, I can't see the end of my nose!"  This was glorious, the fact one of them had a Sid James laugh only added to the early morning mirth, no wonder the WiFi password was 'properpub' (lower case, even though the sign was in capitals!)  In some ways, this was BRAPA perfection. 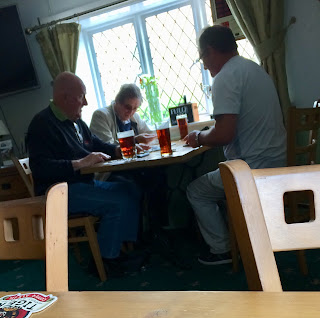 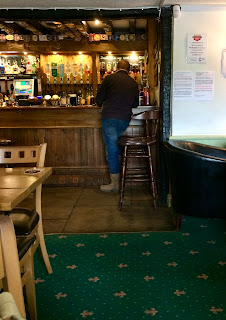 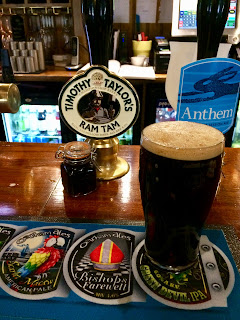 It soon transpired Martin's watch was three minutes slower than mine, so I was back out at the car when he jogged around the block.  Back in the car, next stop was Thriplow just a few minutes drive.  It was a beautiful little setting, rather rural and again, Martin looked at the pub with slight suspicion and went on another walk, giving me the full 30 minute quota. 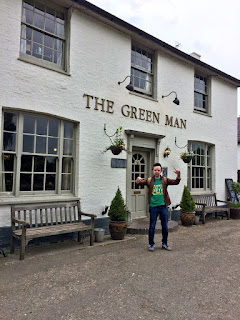 First thing that annoyed me, they'd blocked you from entering to the more foody right hand side so you had to enter to the left through the 'bar' area, which means every man, woman and twild did, right in my eyeline.  I use inverted commas around 'bar' because this so called trad area was blindingly jaundice sepia style decor, gin menus, wanky blackboards, zero beermats, hanging hop bines and jam jars.  Or in short, a pub that's trying to annoy the rogue drinker!  The barman had an antipodean twang, and was a good guy, in fact all the staff were friendly, hard working and patient (we'll get onto that).  I guessed he might be actually from New Zealand, for he wore a lot of black and white, looked ready to break into the Haka at any given moment, and had he dealt with a fish & chips order, he'd surely have said 'fush and chups'.   A young local Prince Harry came in, lauded it over the pub, and smiled nicely at everyone but me.  The nicest customer was a quiet nervous man.  He was here for a date with a 'Jane' who'd reserved their table, he admitted he'd arrived an hour early!  Dutch courage on a grand scale it seemed.  Everyone else came in, demanded food, said they hadn't booked, but they wanted an table in the window!  This is where the patient barmaids came into their own, basically telling them in the nicest way possible that they were almost fully booked but could sit outside and if it rained, it was their own fault for not booking.  I was in survival mode by now, and had to grasp at the slightest remnant of 'comfort' so I picked up a book from the book case about two naughty kittens called Smoke & Fluff, probably named by Mudgie.  To cut a long story short, they behaved like dickheads throughout, especially upsetting their 'cook', hiding in cupboards, stealing tarts, getting flour everywhere.  Their Mum told them off on the penultimate page, but then forgave them immediately saying "kittens will be kittens".  Cook was fuming like 'WTF dude, I resign', and Cambridgeshire has never forgiven Ladybird books, hence Pet Crematoriums specially designed for kittens wherever you look. 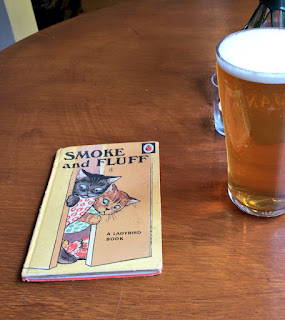 Again, I was back to the car first despite having taken 32 minutes, such was the gripping nature of Smoke & Fluff's adventures.  Martin bolted out the undergrowth like a proper Fenlander, and soon we were heading the short distance to Newton, probably walkable on a 'non-assisted' BRAPA day.

"Ahhh, this is great isn't it?" I said to Martin as we sped down a country lane.  "What, the Cambridgeshire countryside or being chauffeured around the pubs?" he asked.  I laughed.  He knew.

"Do you know about this next pub?" asked Martin as we parked up, for it had been in every edition of the GBG ever!  Wow, I love ticks like this, as they are properly valuable (watch it get de-guided in 2019 now I've said that).   But would that be a guarantee I'd love it?  You'd think so wouldn't you?

We wandered inside to find a series of Adnams barrels facing us.  Martin got something sensible cos he's a pub man, I got Mosaic cos I'm half millennial and make dangerous life choices.  No head on such beers of course, hmmm,  when in the south, do as southerners do.  Bet if those embarrassing Hull City fans who take a sparkler around the country with them brandished it here, they'd have it shoved right up their Hull.   The staff & punters had that whiff of superiority about them that you often find in pubs that KNOW they are good (so why try harder, right?), seen it in plenty worse York tourist ghost holes than this.  If the staff weren't chilly enough, there was that chill in the air that you get in ancient unchanged pubs where they can't really do much in the way of heating it up, or say they can't. You could even suggest that the pub tries a bit too hard to maintain a 'basic oldness' when you hear that food-wise, it is famed for this 'brown soup' which some may say is the same pot of stuff, stirred a couple of times a week, and that's been going round & round since 1729!  Only 18 landlords here since 1729 .... now I'm not saying what the brown soup is made from but .... Anyway, no sooner had we been served, found a seat to the right, when Martin tells me how posh everyone is in Newton, when a father, son and greyhound trio (all with the silky smooth voices of Roger Allam) walked in with their respective noses in the air.  After seating ourselves in the right hand side, Martin decided to give me something of a guided tour and opening a very closed door at the far end found apparent Cambridgeshire royalty, an ex CAMRA legend and ex landlord of Cambridge Blue, my first Cambs real ale pub back in 2003 and a very good one I might add.  Him and his wife looked unimpressed, so after the odd photo here and there, I shuffled off like the pub tourist scum I am.  Occasionally Violet the Greyhound would run over to us for a head scratch and probably say "Oh Terri, I don't like the cut of your jib", a quality dog.  But ultimately, the pub left me with that same feel that the Seven Stars in Falmouth did.  So old and famous, they make you feel like you should just be grateful for being here.  Grateful that pubs like this still exist, yes, but I can't remember the similar Bell at Aldworth or Birch Hall Inn at Beck Hole lacking 'down to earth' qualities.  It was a faint subtle detachment, like "yeah ok, don't come any closer, you can look but you can't touch", but it left me feeling a bit underwhelmed by the whole thing.   A pub that deserves any pub lovers attention, but gimme Roscoe Head in Liverpool any day. 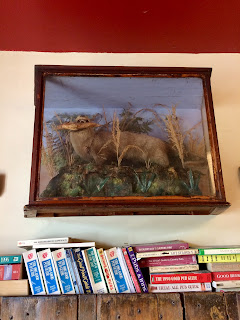 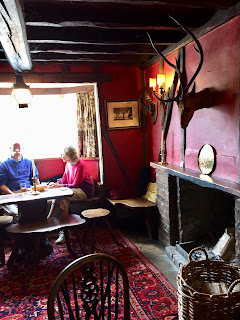 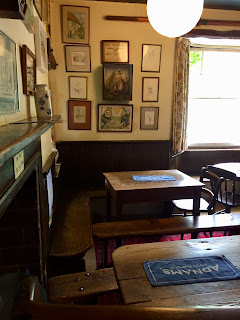 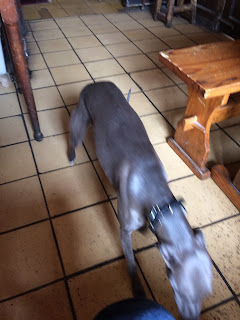 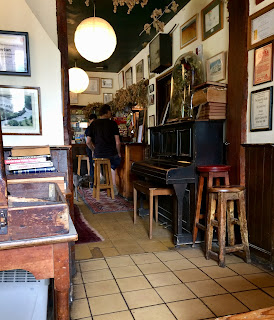 Anyway, it was THAT time.  The key pub of the day was on the horizon.  Well, a very long and painful horizon but I will tell you about that, Royston ' Spoons, drunken Si and two London pubs in part two.