The long warm Bank Holiday weekend started in the last place you'd have expected me to book after last month's horror show at the Royal Oak, as I returned to Wigan.

After checking into a particularly dangerous Premier Inn, situated at the bottom of scroat-hole stains-ville, King Street, on a busy island of angry traffic, I hopped on a bus and travelled ten minutes to Standish.  It was a bus ride that seemed more like a coach trip away-day for bored students.

Standish was shimmering in the hottest Friday evening so far this year and the inhabitants of the furthest west Greater Mancuncian GBG entry were wiping sweat off bald brows and tribal tattoos outside all manner of main street bars.

But this was a great place to be for a 'scratcher' like me.  I had three GBG entries all within yards of each other, and one was a club opening at 7pm which it almost was, so I was happy and all set for a valuable evening.  The first place took me by surprise as it loomed in all its redness when I was expecting some huge old Victorian corner pub, which shows how naive I still am re the march of the micropub. 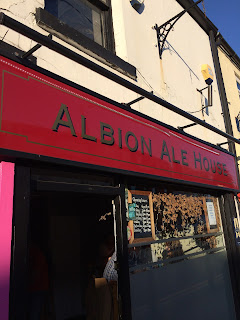 A landmark moment, my 100th Greater Manchester GBG tick in the current guide, the most I've ever managed.  Proof progress is being made in this often wonderful pubby 'county'.  Of course, I wasn't thinking this as I stepped into this 'micro-bar' with the usual selection of rosy-cheeked middle aged homely looking folk.  A narrow place, I'm no fatty, but the beer belly is comin', and I had to breathe past a series of bums and boobs (and that was just the men) to fight my way to the bar without coming into physical contact with another body, a bit like that game where you have to get the metal thing across the circuit without touching the sides and making it buzz.  There, I was 'greeted' by four immovable bar blockers on stools.  Luckily, mine host was one of those ultra friendly wide-eyed blokes, born to work in such a micropub setting.  He was probably weaned on the teat of an interestingly golden microbrew from Kent made from a hop first cultivated by a band of goblins in 1522. I managed to see a pump clip after much jostling for position, so I went for it, and as he carefully passed it me through the gap , curly blonde bar blocker lady jokily pretended she was stealing it.  What a card!  Anywho, I managed to find the one area of 'no man's land' in the pub, between the 'secret beer garden' (not as enchanting as such a name conjures up) and the vast majority of indoor drinkers, a bit like a loners corridor in truth but I was happy and the folk who wandered past smiled and said hi.  I'd say this place was a grower, as I went from non-plussed boredom to enjoying it in the space of 25 minutes.  Quality beer from Wily Fox (no sexy fox on this one!) probably helped after a long hot commute.  Everyone speaks louder in pubs on a Friday evening than any other time of the week, including weekends, that is something I've noticed over the years.  And although mine excellent host temporarily held me prisoner by leaning against the wall so I couldn't escape, this was a promising start to the weekend.

So now time for the key moment of the night, as it was well gone 7pm and the 7pm opening club should be open.  I found it with comparative ease for a Lancs club, although I did nearly walk into the next door Dance Academy which could've been amusing for the blog I suppose.  Well, amusing for you, the reader.

A reception area had a door to the right saying 'strictly members only', so the unmarked sign on the left hand door indicated 'TWAMRA members, loners, losers and outsiders' and was a large function room, with an element of Phoenix Nights about it before I'd even been served - the purple illuminated curtain with silver sparkle may have had something to do with it.  The club steward, or whatever the devil he was, sounded Irish when he was in the members room, but local when the acoustics brought him closer, though I was happy to wait til I'd finished chatting to his local blokes, just too relieved I was in and it was open!  I ordered something local and happily cheap at £2.60 ..... club prices.  I hadn't even had to show my CAMRA card or GBG. I sat just to the side of the bar on some modern bench seating, a blessed relief after the last place, where I'd had to sort of perch at a posing table, standingish in Standish?  Well, I never felt I'd quite nailed the joke I was aiming for!  Anyway, I'd been vaguely away of a middle aged couple taking the odd photos of each other, and what seemed to be their son helping a "DJ", his best mate, get some 'tunes' over the speakers.  This was all at the far end of the huge function room.  But within 5 minutes, I look up and 'son' is looming over me.  "Has someone invited you?" he asks. "Huh?  Oh, is this your birthday party?  No." I say reacting quickly, wondering if he's about to turn bouncer and chuck me out.  But he told me he just didn't want to seem rude by not introducing himself.  Well, all credit to him.  Half an hour passes in this unique environment and still no guests.  Most exciting part was when 'the Dad' comes over to the bar and orders a Doom Bar.  'Mum' looks embarrassed.  Not sure if it's for her husband or her son, but no one is winning here.  Just before I leave, a weird rouge character who knows the barman appears.  "You here for the pre-party meeting?" he asks me with a crooked smirk, so I grab all my belongings together and run, unsure what it all means.


Back around the corner down the street, it suddenly occurs to me that the most 'faceless' of the bars I'd seen earlier with no apparent inn sign is my third GBG entry!

I need an outdoor pic but the only sign I can see has two women sat in front of it chatting.  Uh oh, I don't wanna get into trouble as I've learnt these lessons in 2018, but as I start to indicate to them I'm taking a photo, they simply move their positions and heads slightly, glance at me with an air of the 'what of it', and then continue their chat, such is the laid back nature of Standish Friday nighters! 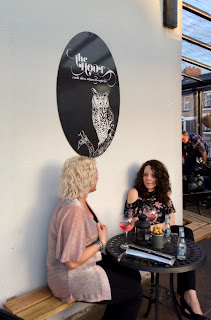 Now regular readers might know I love owls.  Like I love cats.  I think it is the big eyes, cute faces, ability to inflict injury and total contempt of humans.  So to read I was going into an owl themed bar, I was thrilled, except it didn't really follow through on the idea.  The odd painting or figurine dotted around this otherwise drab bar was never gonna convert any Standish inhabitant to the same level of owl devotion that I have.  Even a Sheffield Wednesday fans level of disappointment would increase, if possible.  Quick service from some slimline bloke with wiry arms with an element of a young Tim Henman, I paid my £3 in exact change (most I paid in the North West all weekend, but London would even things up, and then some!)  There were probably more females than males present, a radioactive corridor down to the loos was rather disturbing, Eastenders with subtitles shone from a big screen like a Champions League game with West Ham in it (an impossible concept to imagine I know), seating seemed to be nicked from a nearby Ember Inn.  The clientele were rather aloof, as though they thought they were "somewhere special", and worst of all, the ceiling was decorated with a modern art decoey mirror and these polystyrene clouds which were just bizarre, because owls are nocturnal and don't like clouds.  If you'd told me back then I'd go to at least two more pubs this weekend I'd dislike more, I'd never have believed you but hard working staff and decent ale probably saved the ill judged decor.  In a late twist to remind me I was in Lancs, an old bloke appeared at the bar, winked at me, and ordered three pork pies.  This place does pork pies??  There was hope.  But message to Hoot Standish "STOP RUINING OWLS FOR ME!" 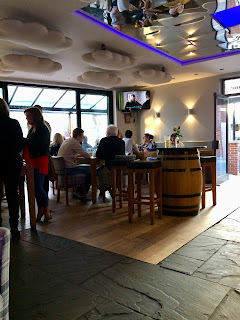 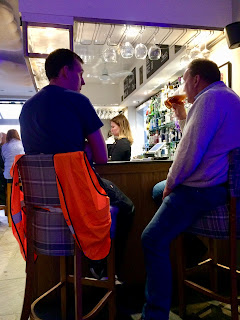 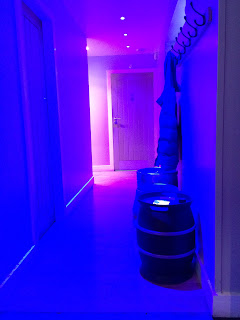 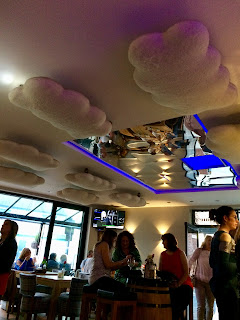 Dusk was falling and it was time to get a bus back to Wigan for a pint in my final GBG tick there.  What could possibly go wrong?  Stay tuned for more pub adventures tomorrow night.