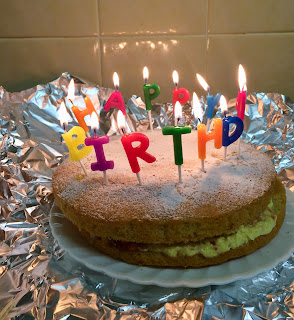 So, the football season was officially over.  It was a relief.  And nice of Hull City on my Birthday to give me the biggest present of the lot, promising not to inflict their awfulness on me for 3 months.

18th place was better than I could've hoped for back in Jan, and a 1-1 draw was the best result I'd seen on my birthday since 1995 when we won at Blackpool and 16 year old me drank a pint of Fosters outside the pub in Biggin on the way home.

Brentford's Griffin Park, is, or was, famous for having a pub on each corner but one of them shut down.  I'd been to three of them in 1999, not sure any are GBG worthy and although we considered a half on the way in, it was heaving so we just used it as a public toilet.

Game was quite fun, always nice to stand on a terrace, but glad when it was all over and we could get back to the pub ticking.

It was so hot, the original plan of the Red Lion in Barnes was ditched due to being a 15 minute walk from the station, probably wise, but at least Wandsworth had a pub right next to the station ..... 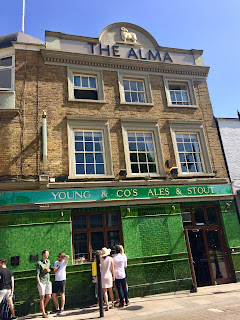 No nicer pub exterior in my book than a green bricked one, and this was a perfect example.  It should be called the 'Green Bricks', said Dad, but then I had a flashback to a rather ropey Hull pub that got in the GBG a good few years ago and glad it wasn't!  Inside was a similar story, full of gleaming mirrors with plants and birds painted on, when I looked across at Dad looking through his rucksack with his sunglasses still on, and Ben in his shorts, it was like watching a colonial expedition in Victorian times, with Tom presumably playing the role of the sleepy feral beast.  The island bar was one of the most shallow I've ever seen, you could imagine oompa loompas getting served here no trouble, but it was a clientele even more annoying than these little fellows who were ultimately to be the undoing of this spectacular pub.  Never before, even in South or West London, have I seen such a gaggle of posers.  This was an old Youngs pub, what could be more simple, but people seemed to be here to 'be seen' rather than just have a drink and shut up.  Our little group seemed out of place from the moment we stepped inside.  Ale was great, it was cool, the Hull City quiz was fun, and let us just say, if I was allowed to come in here at 10am on a wet Tuesday morning, it could possibly be up there with my favourite pubs in London.  We'll never know!


I was pub ticking 'blind' in some respect, having not brought my Good Beer Guide today (football day, can't be bothered to bring a bag that gets searched) and the new rubbish GBG App is at it's worst in London I find.

With Ben's help, we worked out that walking in the general direction of Clapham Junction station and Battersea was the best plan, and we stumbled across a little Fullers pub next. 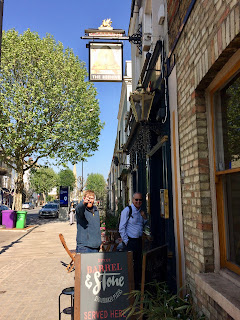 "Ohhh Beehive!" me and Ben said in Austin Powers voices as we walked inside, cue confused looks from Tom and Dad who aren't as culturally contemporary or contemptible(!) as we obviously are.  This pub reminded me from the off of a rather forgettable pub from my London BRAPA past, that being the de-guided Red Lion in Ealing, only less characterful.  The 'Barrel & Stone' pizza signs seeming familiar, and Ben's quiz here was to read out pizza descriptions which we then had to match up with Hull City players from the past!  Before that, a young barman who looked like he had a real potential behind his long hair and shady expression (he'd be a proper raconteur if he worked in Holmfirth) served from the selection of London Pride or Seafarers.  Pride it had to be for me, but it went off meaning I'd been given the last pint of the barrel.  Yum.  So the pub was down to one ale, and worst still, some of the 'Alma Set' of posers seemed to have followed us in.  There must be an outdoors because they soon faded away, leaving a disabled gent to wedge his wheelchair between bar and door, and a few assorted locals, the absolutely London epitome of rich but miserable.  This pub will not live long in the mind. 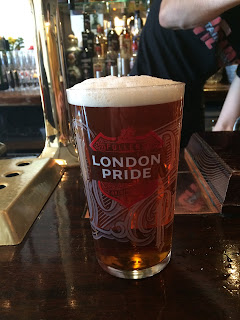 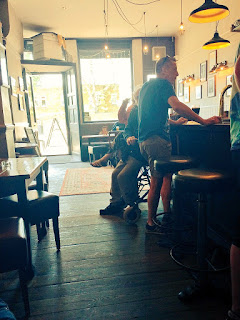 Time for the 'moment of confusion' of the day.  Me and Ben had worked out a pub in my GBG called 'Powder Keg Diplomacy' was just a few doors down.

We came to something hopelessly cafe bar looking called 'Powderkeg', surely this must be it?  But a few seconds inside told us it probably wasn't, so we headed off again.  Maybe it had a sister cafe of similar name?  But walking down the street told us it definitely was, probably!  So we went back. 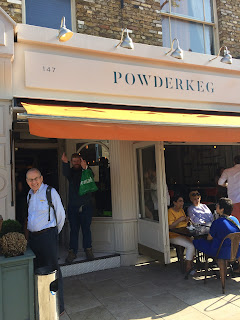 There was nothing remotely resembling a hand pump, but that means nothing these days, especially in London, so I asked the extremely attentive (if slightly creepy) staff who'd swarmed around me like a load of crafty wasps, if they had any 'real ale' on.  They told me Wild Beer offering was the only one, so three pints of that.  But it was poured from a tap that looked like all the others.  Pint of blackcurrant and tap water for Tom?  No, they had no cordial.  Course they bloody didn't.  So a pint of tap water it was, no ice.  All the while Dad is muttering in the background "we shouldn't even be in 'ere!"  whilst I'm trying to form a rapport with the staff, so hush Daddikins.  He was perhaps right though, and at least he'd given me a £20 note for when they charged us £17.70 for the 3 pints, I was even more suspicious as to whether this was cask ale or not.  Tom's water was free - hurray(!)  Well, we sat down in a state of shock.  I got a Birthday phone call from my old neighbour 'Anteater' in Barnsley.  We've always suspected her of being a witch, as weird incidents follow her around, so was fitting she should ring me here.  Barnsley felt a very long way away. Was I in a Tyldesley pub drinking a £2.20 ale exactly 24 hours ago?  BRAPA - you can't make it up!  Anyway, once we'd accepted this sleepy strange bar for what it was, I actually quite enjoyed it.  The beer was very nice, and a top quality acoustic singer bloke started and appreciated our applause, like a man who has never been applauded in the Powderkeg in 20 years of gigging - which I could imagine.  But the question remains, was this cask or was this a 'dead' pub tick I really didn't need to do?

Ben then mooted the idea of popping into the Falcon at Clapham Junction station for a swift half.  No Ben, this is EXACTLY why you were 2014 BRAPA Crapper of the Year.  Stop going off piste.   His back idea was better, as there was a 'Tap' at Waterloo.

After much confusion and roaming of various drippy railway arches, we finally located some neon goodness that suggested beer may be available if we only ask ....... 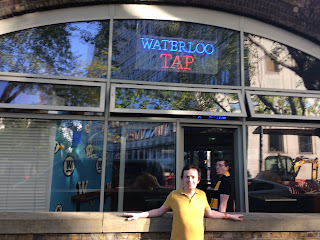 Birthday or not, it was definitely my round with my money after recent trauams!  A young barman with a shock of dyed blonde hair was immediately engaging, when he saw me confusedly eyeing up the selection and decided to do his beersplaining routine on me, so I let him, mainly due to the scrawled blackboard nature of ale names - told you it's rarer to see handpumps in London pubs.  I was asking about one from 'Moor'.  "Oooh, they are from Bristol you know!" (I knew, but pretended it was the most exciting thing anyone had said all day).  "Their session pales are regarded as the best out there!" he told me. "Who by?  The people of Bristol?" I replied, at which he laughed and said they probably voted for themselves.  What high octane exchanges.  Despite having to sit on a high stool under a dank echoey railway arch, I kind of loved this place.  It was a bit like being in an episode of Count Duckula crossed with a trip to Pret A Manger at York's Designer Outlet.  No wonder when Tom suggested squeezing a sixth tick in Central London, he was overruled and we stayed for an extra drink.  'Moment of contentment' of the day was sitting in here, strangely Moor-ish hahahaha. 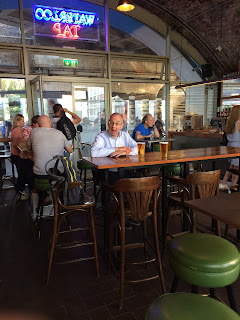 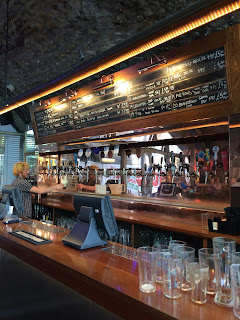 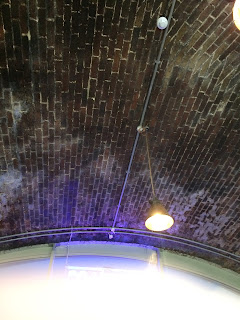 After an unwise brief trip to Parcel Yard at King's Cross, we were back in York for a decent hour and after Dad gave me a blast of ABBA (I blame Waterloo). we had tea and cake and prezzie opening with Mum at the end of a great day.

May is proving to be a more productive month than I expected, and it'd get even better it Cambs the following Saturday, which I'll be reviewing soon.