BRAPA - Grindley Brook has me shook, Whitchurch makes me lurch 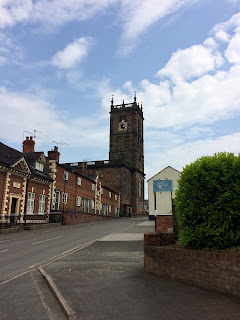 Some of you may have heard of #CanalMan James Brindley.  He built canals and stuff.  And he loved it.  He was a great bloke too, always having cracking banter with the lads over a pint of Burton Bitter or six on a Saturday night.

But how many of you know his evil nemesis, former classmate turned bad, Jason Grindley?  Jealous of his friend's success, our Jase comandeered himself the last available patch of free canal and made Grindley Brook, a real Poundland version of Willey Moor Lock (which you'll need to believe James Brindley built for my tale to work).

What I'm trying to say in a round about kind of way, is I didn't enjoy my Grindley Brook pub nearly as much as Willey Moor Lock.  It's not even on the canal for heaven's sake!  You have to cross this intimidating main road.  Luckily, there was a plastic Liverpool fan crossing at the same time so I used him as a human shield, cos they need to be useful for something.

And I followed him into the pub, what I assumed to be the pub anyway, for there was no visible sign to this depressing looking grey mish mash of a roadside pub.

Apologies for the ABBA reference, have I gone Peak-Mudgie already?  I'm only an impish 39!  At the bar, a gaggle of summery tourists who looked like they'd spent last week in the Jeremy Kyle audience all jostled for position.  Three barmaids were serving, people wanted food and coffee, the til was a modern iPad thing that didn't work properly, it was all rather chaotic.  I managed to make eye contact with the two brunettes very early on, and got a hand on the counter, this was boding well, but I knew my place, and didn't want to push in, but more wanted the blokes next to me to show some initiative, something they were sadly incapable of.  The staff were doing their best, but it was near on FIFTEEN minutes til I was served, not very happy AT ALL!  Sweat dripping down my back.  I ordered a house beer from Wood's of Shropshire based on the pub dog name (Blaze or Blazer or Blazes) because the cute brunette had recommended it to a man and I thought it might impress her, but she was fiddling with the iPad so I was served by the other one.   The pub had some nice decor I noticed in between the lame seating, dogs everywhere, twilds and too much food.  I needed entertainment so sat right in the centre of the room, in the heart of the action, and waited.  I realised I was facing a family of two grandparents, mum, dad and two young daughters.  First thing I heard was the elder daughter shout "CAN I DROWN MY SISTER IN THE CANAL .... SHE'S SO ANNOYING!"  Grandparents and Mum and Dad all laughed and said "that's a bit harsh darling" but they didn't actually say that she couldn't.  Plus, as an older child myself, she was right, her younger sister was annoying, though the older one was reaching her 'Kevin the Teenager' years and was rather irritable.  My doggie beer by the way was going down a treat, pint of the day annoyingly, though the Ruddles glass it came in was a clunky abomination.  Back to the family, they were playing 'heads or tails'.  Why?  To decide whether she was going in the canal?  No, just for the hell of it.  That led into Mum's magic trick, making the two pence coin disappear, but she had it trapped between her fingers and even the daughters sussed out her incompetence.  Suddenly, another scream from older daughter who leapt out of her chair!  "A SPIDER, A SPIDER, IT IS HUGE, HELP DADDY!" "Kill it, kill it, kill it" chimed in the younger sister (glad just to be still alive herself).  Older sister shone her mobile phone torch on it, and despite Grandma claiming "the spider has done nothing to us" she was outvoted and, I believe, though I turned away out of respect, the spider was squished.  And that summed up the pub.


Next, I walked the 40 mins or so back into lovely Whitchurch, a town I do like with all it's crazy half timbered buildings and I find the people friendly too.  Plenty of pubs in last year's GBG, but only one this time round.  I hadn't done it, but I was about to ...... 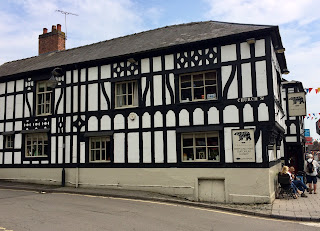 It's hard to remember a pub in BRAPA history that so attempts to walk that tightrope of the olde worlde pub with the modern namby pamby pub quite as much as this one.  You had your old rusty beer signs, sexist old adverts, a village pitch fork, and creaky old internal beams and wonky ceilings.  But, to use the table I sat at as an example, you had a mini tea cup with a tea light in it, on a wicker doily with a flower in a pepper pot.  Even the village pitchfork had an ornamental flower hanging from it.  The bear behind the bar (not real, but there's one in Maidenhead Wetherspoons I've heard) was wearing a Hawaiian garland (Lei?) and looked thoroughly pleased with himself.  There were six staff in matching t-shirts behind the bar, most just praying for a customer to serve - 'get yourselves down to Grindley Brook' I couldn't help but think.  It was a bit like being in the Dog & Partridge at Yateley and the Appleton Thorn Village Hall all at the same time.  The customers were fairly dull, an 18th birthday party was winding down and 18 year olds were doing menacing thing with helium balloons behind granny's back.  I've had better pints of Salopian, one of my fave breweries.  The toilet was the highlight, a 'Dudley Duo Flush', 'twice the power at half the effort' was the slogan.  The slogan 'Because West Midlands folk are full of shit' was rejected early on.  An interesting pub this one, some might say 'very pleasant', but lacking little furry bear balls. 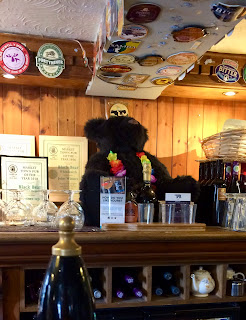 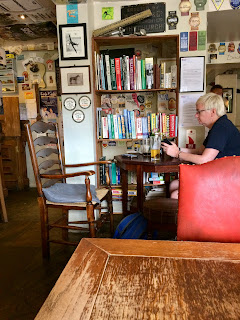 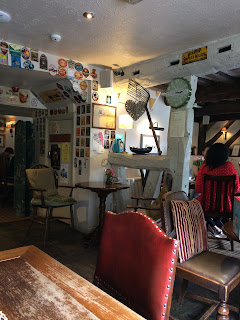 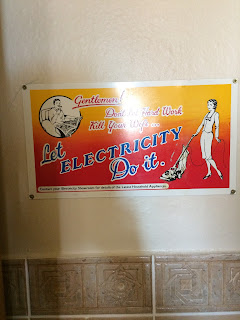 So that was that for May 2018 BRAPA.  Join me tomorrow for some exciting month end review madness, unless I decide to go on a random BRAPA trip at the last minute, but have probably got too much to prepare for my hols.