The huge sunglasses of the taxi driver gave nothing away ..... did she think I was crazy as I explained exactly what pitfalls BRAPA entailed (for example, paying huge taxi fares in the absence of public transport when you are against the clock?)

But one thing was for sure, just because my next pub was listed under Haltwhistle, it doesn't mean it was an easy one to get to.  No, a thirty minute uphill climb north towards Hadrian's Wall.  The taxi option was the right one!

The terrain and scenery changed once more to a savage wilderness, probably because the Scots weren't far away.  "Are you telling me that is the Wall we can see, I didn't know we were THAT close?!" I ask as I pay the fare.  "You can go up there and touch it if you want!" she replies.  Is she charging extra for that?  Are we still talking taxi fares?

Anyway, I've fallen for the common misconception that Hadrian's Wall separates England from Scotland.  It doesn't, you've got another big chunk of Northumberland to get through.  How has it taken me 40 years on this planet to learn this fact?   Time to get in the pub ....... 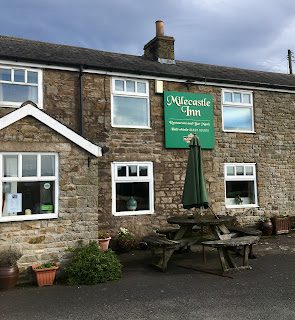 'Delightfully surprising' is how us Yorkshire Bankers would describe Milecastle Inn (1545 / 2761), just north of Haltwhistle on the Military Road which runs parallel to Hadrian's Wall.  You might expect some dining tourist trap in such a location, but for the most part, this is a tight-knit cosy pub of a pub!  At the bar, a Southerner is demanding the lunch menu be made available on a Sunday evening with an aura of self-righteousness only someone who lives south of Loughborough can muster.  Some Dutch walkers are blinking in a startled fashion at the olde worlde surroundings, whilst wiping dribble off a baby's chin.  And a local is bonding 'bikes, cars and racetracks' with a Colonel Mustard lookalike from New South Wales with the voice of Jason Donovan. "I've just had my tiger lowered", he says erotically.  He also keeps using the word 'romantical'.  THREE times he says it.  Oi Mustard, it ain't a word! With my BRAPA brain about to explode, I'm glad a wall (not Hadrian's) acts as a partition through the pub, so I can sit in my own private area by the bogs, still fully able to hear, if not see, all.  My Big Lamp ale which I first ever had in Crown Posada in 2002 is going down well, and someone asks a lady to explain where she's from.  "I've been from Middlesbrough to Turkey and back again .... it is complicated" she explains.  Inspired by all, a brainwave hits me.  Another pub which was only a 'maybe' for today is on this same road a bit further down - woah, can I walk it?!  Top pub this, ignore the cushions, full of character. 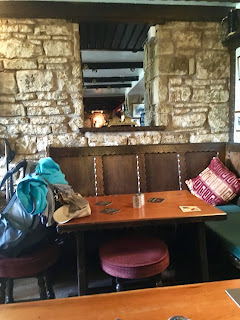 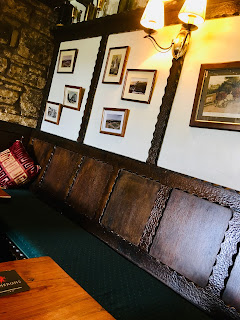 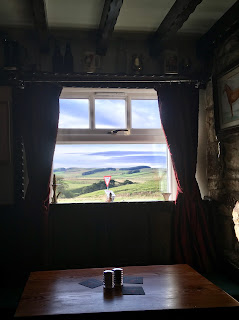 I'd underestimated the distance of the walk, and lack of pavement on the road, luckily traffic was understandable, respectful, I did more waving than the her Majesty as the motorists happily swerved into the centre of the road for me.  At times, the pub didn't seem to be getting any closer but I finally saw the sign I'd been hoping for ...... 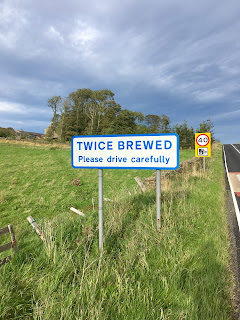 But if you approach from the East, the place is called Once Brewed (fun fact), as is the next pub ...... 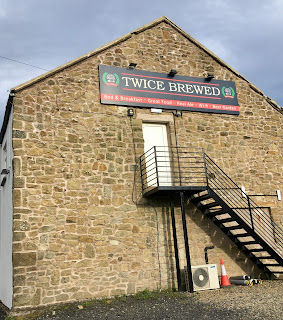 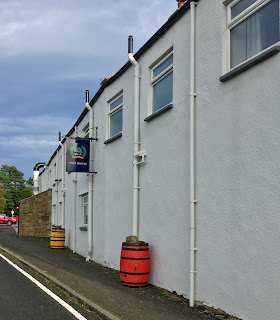 It all sounds superbly beery anyway, Twice Brewed, Once Brewed (1546 / 2762) though it was immediately apparent that the pub itself was much more what I'd been expecting at the Milecastle, very much a dining led tourist family spot.  A helpful barmaid pulls me a candidate for pint of the day in Luna, which seems to be made in their own brewery out the back.  But she asks twice if I'm really seriously honestly just having this pint, and I'm not going to spring some extravagant food order out of my back pocket at the last minute!  A quick scan of the premises and the tinny acoustics of dining families galore, I decide the deserted patio area round the back is the place for me, though a few scandalised looks as I open the door to go outside, but unlike these jokers, I'm boiling hot from a long, pacey walk.  With time ticking on, I ring for a taxi as another hour walk down to Bardon Mill  doesn't seem a good idea.  Eventually, I'm invaded by some German tourists, wrestling with rucksacks, draping beach towels everywhere, and generally making a scene which is needless.  I'd been alone so long, it feels like they've walked into MY garden.  I'm chilly now so go back in, and have the dregs of my pint on a low leather settee, smiling at some scared guy, before the taxi arrives. 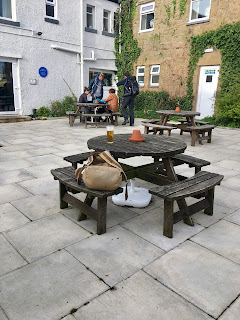 I ask taxi woman if she minds actually taking me through to Hexham as I work out I'd have a 50 minute wait at Bardon Mill or Haltwhistle, and it'd be nice to squeeze an extra pub in.   OF course she doesn't mind, more money for her innit?!

You wouldn't think between being dropped outside the pub, and walking through the front door, there'd be time for a pubby exchange, but a posh tourist couple ask me "do you know where we can find a PROPER pub ..... not that one!"  says the man, thumbing dismissively at my intended venue!  "Well, good luck if you are going in there, too many people, not our kind of place - we walked straight back out" he says, and they walk off, me apologising for not being clued up on Hexham.


Heart of Northumberland, Hexham (1547 / 2763) then, with that 'endorsement' still ringing in my ears, could it really be that bad?  Funny thing is, a couple like that are probably EXACTLY the type of people this pub is hoping to attract, so it is reassuring to me that even well-spoken, well-dressed tourists sometimes just want to cut the bullshit, and find a good old honest boozer.  True as well, it was about three-deep at the bar though most people were preening, puffed up Prosecco patrons with no real need to be stood there, so craning my neck over the top, I was glad the staff were alert and getting served wasn't the nightmare I'd envisaged. And true also, the 'pub' was little more than a restaurant, there seemed little or zero concession to the drinker, and being quite busy, I had to perch on a stool 'twixt bar area and main restaurant.  'Focus on the Bass mirror!' was about all I could tell myself, the narrow nature of this presumably once old pub just adding to the overwhelming suffocation I endured.  The ale was good from memory, and whilst I'm normally forced to admit "well, it is a good BEER guide, not a PUB guide" I think there has to be a line drawn, and for me at least, the inclusion of this place crosses it. 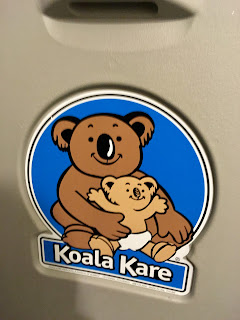 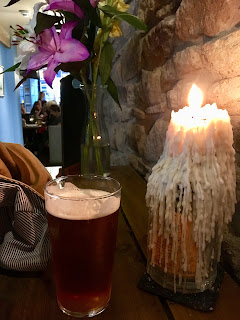 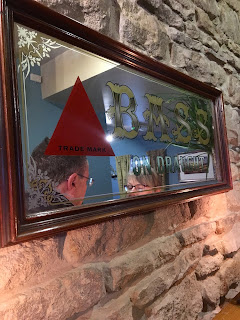 Happily, we'd end on an unexpected high.  I was getting increasingly 'worse for wear', but not to the Newark extent where I forgot how to use the Hexham station loos!  And in doing so, I spied this place .... 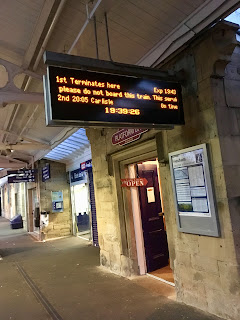 "We've only been open 6 weeks" declares the friendly couple at the Platform Bar, Hexham, surely a great preemptive candidate for shoehorning the 'Heart' out of the GBG in the coming year or two.    As the only customer, I explain BRAPA, preemptives, and my day so far and what a lovely couple they are, talking me into having a full pint of the Matfen (which tastes a bit like a strong, malty homebrew) rather than a half!  Plus, I have that rare 'superior' feeling of perhaps having not only beaten Taylor and MacKay here, but other mystery pub tickers, perhaps even that Tarstairs gang on their motorbikes, though who knows!  I calculate I can afford to miss 'one' train, but not two, so they pour my beer into a plastic cup, telling me 'it probably isn't a dry train'. 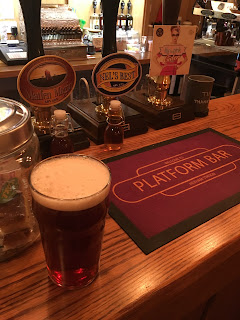 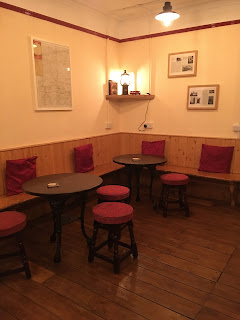 Am sure the train isn't dry, the people certainly aren't.  Someone throws a bit of cling film at me by accident, so he says, and then a man bursts into 'Wild Rover' and gets the whole carriage, including me, singing a long.  He even knew all the verses, and it went on so long, I think it might've made up a few of his own!


So that was all very good, annoyingly once in Newcastle my train to York was cancelled so I wandered around Toon for a bit, finally settling on a quick half in Newcastle Tap for my one previous visit had been standing up in extreme busyness.  A much more mellow feel today, really nice staff, most customers quite old and hadn't been expecting that! 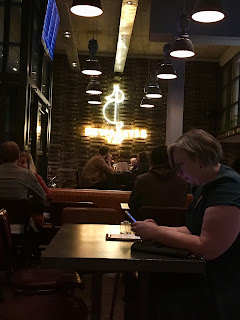 Back home for 11am, job done, nice to offically get the 2020 GBG ticking on the road!  More from me tomorrow night as get back to a bit of West Yorkshire.