Two pubs down on my London Sunday, but time stops for no pub ticker as I chugged rapidly back down the High Barnet branch line, minesweeping the GBG pubs en route back to King's Cross.

Archway was my next port of call, where I'd jumped off 4.5 years ago to visit the Charlotte Despard and that wonderful three legged cat, Legz.  Nowadays, the local GBG entry is listed under Upper Holloway but nothing of a walk.  I found it acting all London-like, practically leaning on the a giant lampost (well, lamp anyway) on the corner of a street, in case that certain little pub ticker walks by ......


A sleepy, much more genteel air greeted me than the one I'd left in the Bohemia, here at St John's Tavern, and granted, food-led certainly but like the GBG says, the high ceilings and open space around the curved bar make you feel a more welcome drinker than in many London pubs of this ilk.  'Sitting at the bar' is one of the last places I choose to position myself, and yet here, in the lull of mid Sunday afternoon, it felt the natural place to be.  Okay, so the hanging, sweating bits of pig behind the bar might not be for everyone, and a good five minute wait whilst a man-bunned bloke getting fresh lemons chopped with a knife blunter than my Stanley Knife post GBG extraction which were then plopped into a Bloody Mary, 'oooooh, don't forget the black pepper!', might not be what I really come to pubs for, but five and a half years into my challenge, and you come to embrace the vagaries of the London pub ticking experience.  Staff were hard working and 'on it like a car bonnet' throughout (which I tend to appreciate on those rare occasions I sit at the bar)  and my London Tap from New River tasted better than Thames Water, so you got to give the devil his due on this one, very good for what it is.

Another required North London tick was also listed under Upper Holloway, so that saved getting back on the Tube for now.  A little bit hidden away, behind a tree in fact so I had to crane my neck to make sure it was the correct one, almost residential you might say, location-wise reminding me a bit of the Anglesea Arms at South Kensington.

And the London-ness (the most annoying member of the Family Ness) was ramped up yet another notch here at Landseer Arms, making me wish I'd brought my London Pub Bingo Card, especially as responsible jugs of water to keep you hydrated was the first thing I witnessed.  Landseer was this Victorian bloke who did Monarch of the Glen, I used to adore Lexie, and I nicked the box set off my dead Grandma, so good on him.  He did some art too and men in neckerchiefs trying to be contemporary Philip Mould's drank wine and twild-life sneered sulkily through bay windows.  Unlike St John's, the pub layout was a bit of a higgledy-piggledy mess with tables, chairs strewn about like an earthquake had just hit, I was boxed in between bar, pillar, and old man looming above on a stool.  Like so many, I had no hesitation of taking my drink outdoors, where a couple on a motorbike just grabbed the last spot in the sun.  I'd done well to get a bench at all to be honest, and soon a Dad and Twild perched at my arm, the latter brandishing an impressive bag of conkers.  'If you need a wee, we'll go indoors' said the Dad.  First I thought he was talking to me!  But then young twildo ran off the wrong way towards a grassy area across from the pub.  "Not that way!" screamed Dad, but I had serious sympathy with the youth.  Amusing place this, get yourself down here and observe life. 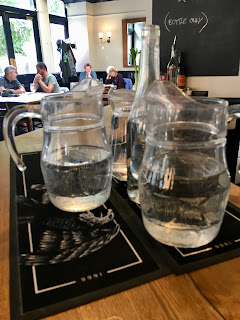 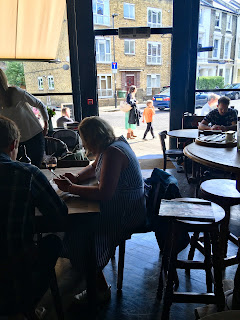 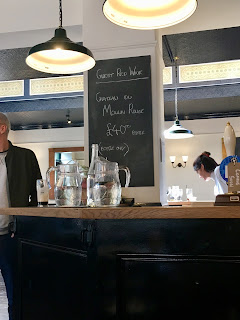 Back on the Tube, time really was of the essence now but I worked out I could do a fifth fairly comfortably, providing I abandon all hopes of a sixth.  And once I'd got my head around that, I was okay joining the heaving throng outside Camden Road tube, fighting my way to stride purposefully towards this GBG debutant  ....... 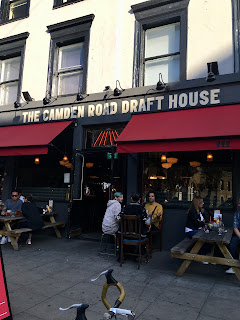 I hesitated just a little bit too long with this photo for Camden Road Draft House, for the trio you see in the above photo just had time to stand up and get to the bar ahead of me.  It happens.  Usually when Dad is there, leading to a comment like "you and your bluddy BRAPA photos!" The barmaid had green hair like the guy who's round it was so they subconsciously bonded.  Not only did he want these colourful looking craft cans, but he explained that in the bar he works, they only cost £3.50.  "Wowwwwwww" said the staff, which made my mind boggle as to how much they cost here.  Thankfully, my pint of 'So L.A' a pretty decent pale in a hazy way, received no reaction and cost about £4.20 or something London standard.   I sat near the door, not expecting much, but a trip to the loo surprised me as I realised the deeper you got into this pub, it actually had an 'atmosphere' I'd simply not been expecting.  Impressed.  I didn't move though, as my beer-addled mind was engrossed in this wavy musical Camden Rock Map, impossible to follow five pints in, especially as punk was at the far end - marginalised as ever, but we won't be beaten, OI OI OI!  (or something .... 'settle down Grandad')  Anyway, on that note, time to get myself back to Kings X for t'train back t'North. 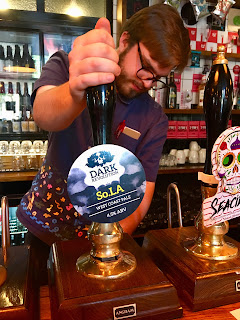 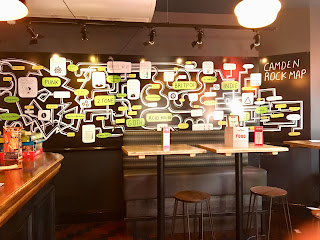 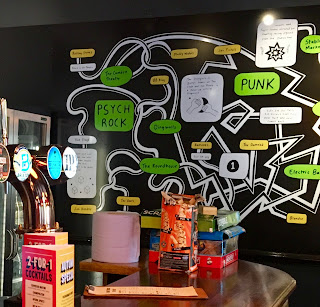 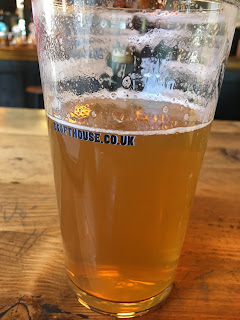 So there we have it, five London ticks to salvage something from a tricky weekend in addition to the six in Tyne & Wear meant we could go into Thursday's official release date 'ONLY' 201 pubs down.

Much work to be done in the 2019/20 season, join me later this week as I tell you about my brave Cumbrian beginnings!