August was finally (and thankfully) at an end with three late ticks, in rural County Durham, in the car with Father BRAPA last Saturday.

Our fourth pub was perhaps the most nerve-wracking for me, having a mid afternoon closure even on a Saturday, and being in such a rural location, it definitely had a feel of the 'now or never' about it.  Relief then, to see it looking open, and nice too, that for the first time today, Dad joined me from the outset ...... 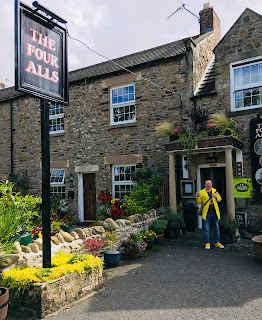 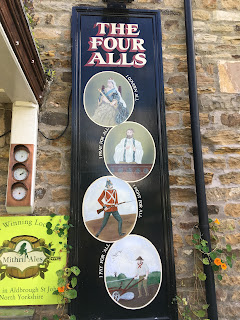 Four Alls, Ovington, to explain the name, we have "I govern all (the queen), I fight for all (the soldier), I pray for all (the parson), I pay for all (the farmer).  Rumours that after my visit, it was being renamed the Five Alls with "I judge all" (the BRAPA) are unfounded.  Now you are always hearing about pubs being extended, widened, opened up etc. so a refreshing change as that Woodpecker once said in a similar accent to the locals here, to find a pub being 'shrunk' due to neighbouring cottages or something.  I'd rather it that way, gotta love a smaller, cosier pub.  The landlady is all-action, as friendly as you'd expect from rural Durham, apologising for the disorganisation (they bought the place a year ago but are still moving in!) and we're soon chatting 'number of ales and evil hunting print above fire'.  Best of all, Rivet Catcher is on again, and I just had to go for it.  The Draught Bass of County Durham?  i.e. if I see it, it is my default order.  I think that could be a nice rule.  Anyway, the chatter had been quite intense so Dad motions us to a table with some nice bright scatter cushions to irk the purists, but it was nice to get sat down whatever.  About five minutes later, she apologises for 'leaving us' but she has to bind up a tree outdoors or something.  Homely pub, great ale, lovely staff, and if this is a sign of rural Co Durham to come, I'll enjoy it an awful lot.

Next up, pub five and what I believed would be the final pub of the day - in the relative heaving metropolis of Barnard Castle.  And talking of relatives, my auntie, uncle and cousins live here so suddenly, my bright yellow jacket wasn't as conspicuous as I liked (didn't want to be spotted and get in trouble for not 'announcing' we'd be in the area).

It didn't help that locating the pub was a struggle, finally finding it hidden down here ...... 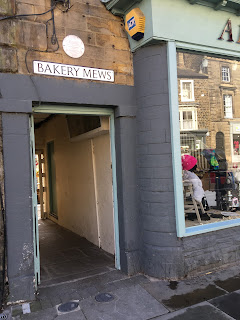 I'd stayed the night in the Old Well Inn for a serendipitous accidental GBG tick on my 34th birthday, as I was up for a wedding in Greta Bridge, so it was just the micropub I was after today ..... 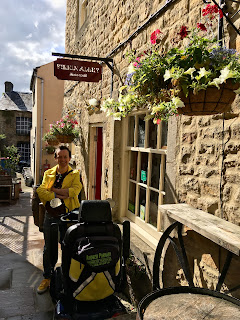 With shopmobility scooter outside and a delightful carpet off-shoot of Wetherspoons, perhaps, not to mention a warming red colour scheme, Firkin Alley, Barnard Castle was what you'd call 'a micropub done perfectly' and with the warm welcome of my previous four pubs today extending into this one, the sense of well being was 'real'.  "You'll be attracting wasps wearing that!" said the affable young male business owner of lengthy beard, to chuckles from the locals at the bar, with a few comments like "fair play to ya for wearing it, lad!"   About time my jacket got the recognition it deserved.  When I wore it for a match at Selhurst Park, Hull City fans simply thought I was a steward.  I've never directed so many people to the bogs and pies in one afternoon!  I digress.  I did wonder if the guv'nor's beard may double as a beehive, but it might've been a weird 'comeback' so I held my tongue.  Our initial love of the indoor cosiness was tempered as about four dogs arrived on mass.  As individual hounds,  all were cute, amusing and loveable but the sum of the parts was a clusterfuck of twog insanity.  Like Dad read my mind, he considered sitting outside,  and being the legendary host he was, our bearded friend helped us get settled at a table in the sunny breeze.  Much nicer.  Dad spied the pub was hosting a beard competition (I think!) to coincide with National Beard Day (hmmm, wonder who'll win that?  I ask with sarcasm) and Dad struggled with the phrase 'bejazzle' so I hypothisised it might be based on 'vajazzled' which was a fun one to explain to him five pubs in.  Quality place, this, get yourselves down.

As we drove back down the A1 (M), I admit I dozed off but when I came to, Dad had turned off for the bonus pub I never believed we'd manage, back in North Yorkshire, a preemptive of the highest order in a place no one has ever heard of (think Dukinfield or Lydgate) called Burneston.

Despite being painted a hopeless shade of grey from head to foot, it complimented the jacket and we pulled up in the car park, and wandered around the front ...... 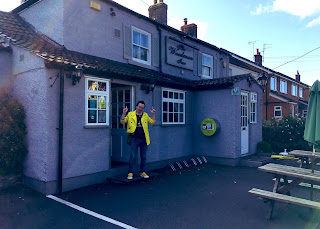 Woodman Inn it was called, and we followed in a couple who were stopping overnight here.  "Just bear with me a minute gentlemen" says the personable American owner with sculptured tache'/beard.  "We've never been described as gentlemen before!" sobs Dad, almost with tears in his eyes, and for a second pub in a row, staff and locals comment on my jacket which I claim is a tactic to help me get served first even when it is three deep at a given bar.  No such problems here, and the American returns for some classic hospitality, reminded me of everything good about North America.  Russ, Mark Crilley, the Southworth's, a bit of Nick Bruels (not sure which bit), and a dash of Captain Jackson from Ripper Street, with fewer autopsies though cut me open and I'd bleed yellow.  Something to do with my liver I guess.  Pub wise ,homelier than I'd been expecting from outside but didn't hold up hugely against our rural Durham classics, yet nice enough. 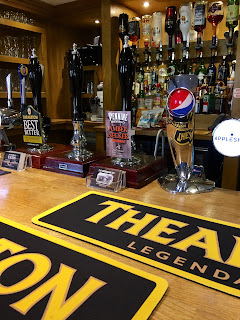 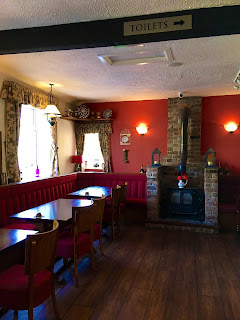 After a nice meal of minced beef, cheesy mash and peas with Mummy n Daddy BRAPA, I required their assistance.

For when I'd extracted the brewery section of my new GBG the previous night, I'd made a bit of a 'hash' of it.  Now I'm not blaming the two pints of Saltaire Blonde and three pints of Shipyard Pale I'd had in Hedley Verity, L**ds , I think the binding is a lot better this year!

But the upshot was, I'd not got the pages out 'right to the spine' leaving a horrid clump of 300+ page ends.  Luckily, Dad had the kind of multi-purpose tool selection you'd expect from a handyman 71 year old legend, and Mum had a special guillotine (ooh la la) and a keen artistic eye.

I wish I'd taken photos, it was quite the scene on the Everitt living room table.  Dad did amazing extracting the clump, but Mum said there was nothing could be done for the back of the book, she had to take it off with the guillotine and reattach it with sellotape.  Fine job, I felt like an exasperated parent hoping their twild's tonsil removal went hitch free.

Would it stand the test of time?  Or would further surgery be needed?  Find out in a forthcoming blog.  Join me tomorrow/Monday night for the long overdue August Review / Sept preview.