The weak lemon drink was flasked, the budget Cheese & Onion replacement pasties foiled, mini cheddars grabbed, yoghurt and mint club bagged.  Newcastle was negotiated, and soon I was standing in a chilly wind at a bus stop in a one-horse town called Haltwhistle (Northumberland) waiting for a rare bus to Alston (Cumbria).  A man from Manchester and his elderly Mum gurgled at me, and a student put her elongated face between myself and the map of Haltwhistle.


"You do realise you've only got 40 minutes in Alston before the bus back?" says the driver of the 681.  "Just enough time to visit a pub and have a pint then!" I replied.  He laughed.  But I'm deadly serious.  Should I explain?  No, we were all ready dwindling it down towards 39 minutes. Tick tock, went the stop clock in my mind.

A bumpy ride followed, through amusingly unwoke named places like Slaggyford amongst some beautiful but increasingly rural scenery, it reminded me a bit of my trip from Ayr to Kirkmichael three years back.

Forty or so minutes later, we reached Alston, the end of the line.  "See you in a bit then!" quipped the driver, and I hopped down the road, with an added skip and a jump, like a kid at Christmas, such is the anticipation of a pub-ticker about to begin a new county. 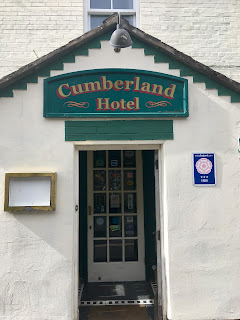 Or Cumberland Inn (1543 / 2759) as the GBG says it is now called, perhaps because 'Hotel' makes people think 'cliquey grubby bars not welcoming to the general public'  I don't know, that'd be my guess.  This place did feel like a hotel bar, but an incredibly good one with a classic pub atmosphere.  Our lady incumbent was 'stand out' bar staff material, and despite an agonising wait to get my pint to me (I'm against the clock here!) she kept me fully abreast like a parcel tracking delivery service.  "I'm serving this gent, then I have to set a table, then I'll be with you" followed by "I'll let it settle while I give some mustard to this table, then I'll top it up".  I was almost happy to wait, despite a doggie not twoggie with long claws jumping up at my groin and demanding attention, even if owner was the most unresponsive newspaper reader ever.   "Beware of this one, it is Vulcan mustard from a volcano!" she said to a group of bewildered bikers from Gloucestershire, before a vague Spock reference.  I suspect she was a bit crazy.  "I'm going to call your Allendale GFPH 'GuffPah'  It's easier that way" she warned me, and told me just because tables were marked as reserved, they weren't for hours.  I'd normally find this an annoying pub trait too, but not here, not from her.  I sat in a corner, sad I couldn't see the amazing views due to three lunching ladies, whilst the Glos bikers saw a sign for Much Marcle which tickled them pink.  Weston's Cider or Fred West, it didn't seem to matter.   If this place is a sign of Cumbrian ticks to come, it'll be a most rewarding county.

I made sure I was in plenty of time for the 'so-called' last bus of the day but trouble lay ahead as the couple in front of me and no coins, and the driver had no notes.  I tried to assist, but only had 90p left, they needed £4.50 or something.  "Shall I nip down to the village shop?" asks Mrs Coin.  'How much time do you think we have?' I'm thinking, but driver agrees to wait.

She returns five minutes later, much to the chagrin of me (losing valuable pub time) and a mardy old bugger from Lambley who'd gone to the shops in Alston and was on the same 40 minute thing as me.  She redeems herself, offering me one of the 4 pack of Crunchies she's been forced to buy.  I hesitate, so she shoves one in my hand, I've eaten it in seconds, and I reward her with a quick BRAPsplain session. 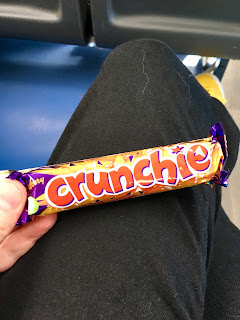 Amazingly, there is another pub on the 681 route back to Haltwhistle in my GBG, I know jumping off will leave me stranded public transport wise but can't afford to pass up such an opportunity.  "I think yer pub is around here somewhere HAHA" says my bus driver a painful 35 minutes later with bladder full to bursting.

And I turn the corner, locate it, and am just delighted to see it open as it is one of those 'ring ahead in winter' pubs but what type of monster does that anyway?  Not me or Martin Taylor, that's fo' sho'. 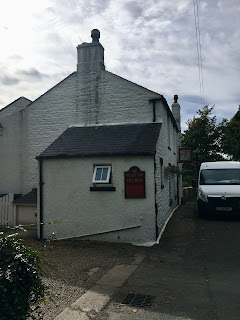 I liked the no-frills cottagey outlook of Wallace Arms, Rowfoot, Featherstone (1544 / 2760) and inside, it lives up to expectations.  A landlord chatting away with five seated old locals, a roaring fire in the grate, and Rivet Catcher on the bar.  Enough to make myself forget for the next half an hour I'd cut myself off from the outside world! Perfect.  Well, it was until I dumped my bag and jacket, and purposefully strode off in search of the gents, only for the assembled group to roar with laughter as it is right beside the seat I'd left my stuff on.  Typical.  "You've done an entire lap of the pub!" says one bloke, as if my non-local accent hadn't already singled me out as the 'outsider'.  "You on a walk?" asks the friendly lady next to me.  That allows me to BRAPsplain, and they love the idea.  It also allows me to fish for ideas of how to get back to Haltwhistle.  I could walk along this disused railway, but the taxi option seems sensible being on a fixed ticket home from Newcastle, and after minimal signal and a couple of declines, someone agrees to come for me!  Another half is required, Consett Red Dust, another NE classic, tasting strangely like cider on this showing though.  Taxi arrives sooner than expected, I neck my ale, the group who have now extended to about ten folk who all seem to have known each other for decades, wish me all the best with my trip.  I make a comment like "I'd love to come back here one day but of course I never will!" which sounded harsher than intended, grrr, stupid BRAPA, but no time to dwell, onwards and upwards, literally in the case of the next pub!


So that was two really good pubs to start the day.  My first Cumbrian tick since a 2013 trip to Ulverston, and my first in Northumberland since a 2009 trip to Berwick! Let us get our #CONE on.

The later pubs in the day didn't quite live up to this start, but I'll try and tell you about them either tomorrow or Sunday.