At the beginning of August, I told myself that we needed a period of calm in the world of BRAPA.  A non controversial, quiet month of stoic pub ticking.  After all, July had been a bit insane.

What with 'Drunk in Burton', 'The Newark Station Incident' and 'The Phantom Ticker of Sidcup', I was worried I was becoming even more of a parody of myself than usual.  So yes, a call for August calm was top of the agenda.

So, how do you think that went then?!

It all started with the completion of Derbyshire, which had looked like a race against time before the new GBG was published, but ended up being comfortably achieved on the 3rd.  But nothing comfortable about that final pub experience, a vinegary Bass in a pub that'd stopped caring.  A sad end to what had probably been the most rewarding county I'd completed to date in the name of BRAPA.

Less than a week later, an insane night around Greenfield, Mossley and Stalybridge with Quosh, Chris Moran and Chris Dyson.  The preemptives at times better than the actual ticks.  But great company and a hazy night to 'remember'.


A return to Hull City away day 'fun' saw a great day in Brentford, well (T)wickenham to be precise, and trips to the Bury and Bolton areas were equally rewarding with great pubs and folk.  Another highlight was Middleton where I got the meet 'The Tand' (or Peter as great mates like me call him), what a gent, four super pubs, JW Lees galore, and more top folk.


But as the temperature increased and the Bank Holiday weekend drew to a close, the heat also was ramped up on BRAPA, as we went from 'Ambre Solaire' to 'I'm Ombre, So There'......

Having already upset Stalybridge's most sensitive cask-free pub (and been threatened with bum rape if I ever return!), I had even fewer reasons to be cheerful as a Burnage business owner took exception to my 'blonde lady barmaid' comment (a thoughtless description at worst on my part, but 'offensive', really?!  Never the intention!), not to mention criticism of their blue and grey colour scheme.  The Twitter pitchforks were soon pointing in my direction, first time I've witnessed this kind of thing first hand, leading to a bloody terrifying Bank Holiday Monday arvo!


Yes, Twitter Analytics from Yate-Boston-Harvard University in Illinois Vermont contacted me to say only Jim Davidson (no relation btw), the Brazilian President who hates rain forests and people who think pineapple on pizzas is acceptable received more Twitter hate.

Next day at work when my boss asked if 'we could have a word', I thought it was gonna be about this!  "Look, I didn't mean to objectify anybody, please don't sack me ..... ohhhhhh, you want to talk about tailoring a LIBOR business loan to set quarterly capital repayments over a monthly interest profile?  Fine!"   Paranoia had truly set in!

Thank goodness then for the GBG dropping onto my doorstep Fri 30th.  Now I could re-focus  - yes, that double-edged sword of 'cross-ticking' that pesky GBG, and on 12th Sept (official release date, end of embargo), I'll tell you exactly what the damage is! I've been through three green highlighters, two Stanley knives, a guillotine, so you can say we've been on a journey already! 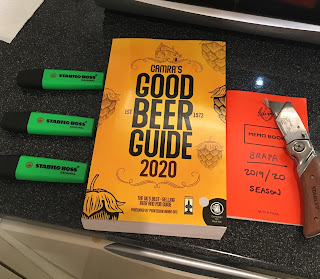 39 new pub ticks and 4 preemptives I'm reckoning is a pretty decent result.  Hard to pick my faves, but Dungeon Inn,Tottington and Imperial Arms in Chislehurst  kind of stood out as quite magical.  Wonderful to get to Tandle Hill Tavern, finally, and every bit the pub I'd hoped and expected, whilst Rising Sun in Mossley was an exceptional preemptive which deserves a GBG place.


On the downside, poor quality ale blighted Hole in the Wall, Long Eaton and Millgate, Failsworth though neither were bad pubs in other ways, I found Long Pond in Eltham quite a soul destroying place on my visit, Hackney Carriage not massively better,  but the standard of August pubs (and ale) was generally above average.

Well, I'm a bit late with this blog so I've already had a couple of cracking trips to Mirfield in West Yorkshire, and up on Tyneside, both of which I'll write about this week, plus a special 12th Sept GBG release post.  I'll also have done a Shock Sunday London (SSL) by the time you read this.


Plenty to discuss on 12th Sept official GBG release date (I feel a four-parter coming on!  I can hear you groaning already)

I'll finally get the Cumbrian ball rolling next week, though I suspect it really will be just one pub as I cross a border into 'another world').

Luton is always a tough place to go and get a GBG result, but am looking forward to that with Tom and Dad on 21st, and a week later, am thinking about something ambitious, Cumbrian and overnighty, but cannot quite decide if that's a bit too ambitious!  Is Barrow a friendly place on a Friday night?

Oh, and I've just booked the BRAPA Autumnal Festival for October, was originally going to be Dorset, but with my Cumbrian need greater alphabetically, I'll be up in t'Lakes so that should be a productive time.  Having spent yesterday researching buses, trains and walks, I can say I'm champing at the bit to get stuck in to the county I've neglected for too long.

Re Friday night / after work trips, back to focusing on West Yorkshire for now, then moving onto South Yorkshire, a tiny bit of North, one in Durham before a GMR return in the spring/summer of 2020, if they'll have me!