The origins of last Friday's trip to Tyne & Wear can be traced back to 4th May, in the Black Bull's Head in Openwoodgate, one of Derbyshire's more understated gems.

"Have you done Whickham?  How on earth do you get there?" asks Derbys premier casual pub ticker Mark Daniels.  It was a question I'd been wondering myself since the previous September.  Experienced pub ticker Martin Taylor took a long slurp of his Bass (or equivalent J20), sits back, pauses for dramatic effect, clears his Fenland throat and replied "you can walk it from the Metrocentre, only a couple of miles".

Martin always has the answers of course, but the GBG is misleading here, as the only 'symbol' it displays is the 'dog friendly' one, giving the impression Whickham is some isolated hamlet with no transport links, probably a pub on a hill on a rural area!

But nothing could have been further from the truth.  It has cars, buses, housing estates.  Hell, it even has a Greggs in a little shopping precinct, and in truth, isn't that all people north of Durham really care about at the end of the day? 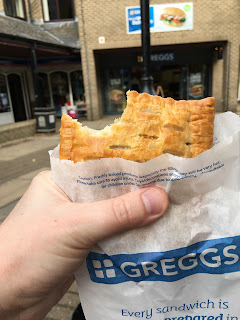 And after what seemed like a constant 35 minute uphill walk, I was in need of the sustenance.  It'd also give the 11:30am opening pub a chance to open, which it managed successfully, just three mins down the road .......

So, here we are, One Eyed Stag, Whickham and still no pub number at this stage, as the GBG hadn't been officially released.  I'm unsurprisingly the first customer, greeted by our smiley hostess Megan and a glorious pint of something pale from Blaydon's Firebrick slipping down a treat after that long walk and Greggs saviour.  "Are you the business owner?" I asked her, still scarred from Burnage two weeks previously, but she replies she's just temporarily in charge whilst female business owner (no idea on hair colour)  is in America, harvesting some special new hop from Louisiana's dust bowl, or whatever micropub owners do with their spare time. I explain my strange line of questioning, and she says owner wouldn't object to 'blonde lady barmaid' though no idea of actual hair colour, of course, I only see the person within #WokeSi2019/20.  I'm amazed that the Metrocentre isn't on the Metro, and inevitably, I then witter on about pub ticking for 25 minutes, Megan's only respite being the arrival of a beer delivery from Stockton on Tees.  Eventually, a smiling red faced local arrives for a cup of tea, but I'd gone on for long enough, so I bid farewell, Swalwell bound ........


Only a 15-20 minute walk to pub two, this next pub was the only pub that stopped me 'completing' Tyne & Wear two years ago and is a GBG regular so a nice one to get chalked off ...... 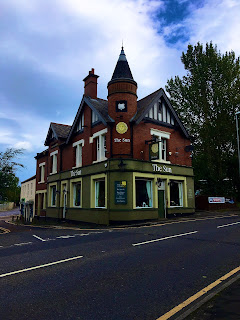 A nice looking imposing corner Marstons pub, Sun Inn, Swalwell, offered another warm welcome, this time thanks to mine host Dave/Davey.  His accent was quite strong, took me a few mins to adjust to, and being a former Sunderland Uni student, I'm conditioned to view a Newcastle Utd shirt with some amount of fear, dread and loathing, but again, once I'd seen the man within (no, I don't mean I'm picturing him topless) he was a canny bloke.  We soon get onto GBG related topics, and his other pub 'Owa the Road' (that means 'over the road' in Geordie) is errrm, 'over the road'.  Problem is, as Megan already identified, Google's 4pm hours are the correct ones, and Davey has no idea where the GBG has got the 2pm opening hours from, whilst it says this pub is 11am when it is actually 12 noon.  I'd have similar problems at Leeds Slocken a week later, so I hope the 2020 GBG isn't gonna be blighted by terrible opening time listings!  Not with Cumbria in the offing, imagine?!  Well, he tells me his new venture is because he doesn't get the freedom from Marston's so that is understandable.  A lady in the far bar smiles wryly then leaves, and the only other customer is a surprisingly mute taxi driver drinking half a coke, leading me to think they do so much time gabbing, perhaps their downtime is often spent not talking!  It makes sense.  The ale is quality, the pub has atmosphere and different rooms, but Davey reminds me by bus is imminent so after a rare 'BRAPA handshake'  I have to rush for it and catch it with seconds to spare.


The bus takes me to Gateshead, and a couple of stops on the Metro to a place called Felling which some Sunderland fans once told wasn't a safe place after dark for a friendly Hull City fan.

On that day, I did the neighbouring Wheat Sheaf with the good Tom Irvin, and just like that pub, I'd been foiled here earlier by 4pm Bank Holiday opening times.  Relief this time then to see the pub nicely open ....... 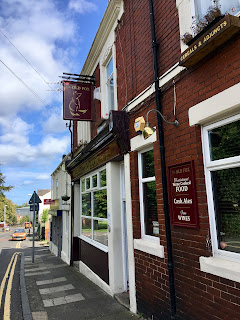 Old Fox, Felling, Gateshead like the Wheat Sheaf is a proper no nonsense old school boozer, deathly quiet, soothing carpets, and swathes of empty space, some of which is converted into a stage as it seems to be a popular live music venue.  Third time I walk in as only customer, but our host, a genial but quite shy long haired lad reckons I should go for this insane chocolatey stout which sort of knocks my socks off a bit, but about time I cut the 'safe pale ale' apron strings and challenge myself!  After sitting in the corner with my GBG, I see he is bored so go to join him at the bar for what must be a record third consecutive chat with staff.   On the same lines as the Sun Inn, he tells me they have a 'sister' pub now in the GBG, 'Beer Street' in Newcastle so I vow to make sure I get that one ticked off later.  His brother, he says, spends most his time running that one now.  We get talking spirits and novelty gins for some reason, and then a shady guy comes in for half a coke but only for about 5 minutes.  The action only really ramps up just before I'm about to leave, as a lady and young lad (is this Mam and Bro?) crash through the door, and our host has to transport what I count is 24 bottles of Jack Daniels to the cellar depths.  Again, seems like my cue to go so after a quick pee and nearly colliding with Mummy Old Fox, I'm on my way again.

So three pubs down, three to go!  Time to do what I always seem to do when a new GBG is forthcoming, and head to South Shields ...... (I'll tell you about that on Sunday).