BRAPA and .... There Ain't No Disputin', the Joys of Luton

Time for the monthly Hull City away day, and ever since the football fixtures came out in June, this was a 'definitely going to' match.  Partly because it is an old fashioned ground quite close to the town, we haven't played there for years, but mainly because I had three BRAPA ticks I'd strategically left alone so far this year.

An appealing fixture for all, we had quite a large group assembled, but in the early stages, it was just myself and the fit again Father BRAPA as an old couple barked instructions to get us through a multi-storey car park so we could find the best route to Wetherspoons, the traditional place to start any classic away day.


Seemed quite an imposing modern building, White House (1550 / 2766) and by gum, did you see some life in here?  The Spooniest Spoonsy ever, every man in a stained white vest (blood?  gravy?  was like a Persil ad), a shopmobility scooter glimmered in the sunlight, and the area where the handpumps were was deserted, the lager and coffee 'station' about three deep.  A huge banner proudly displayed their inclusion in the 2019 GBG, but they can now stick the 2020 GBG one up, if the colours aren't too Oxford or Barnet or whoever their rivals are!  "Reminds me of Strictly!" said Dad as we climbed the spiral staircase to the more peaceful upstairs, where a REAL bookcase (yes micros and dining pubs, it CAN be done) displayed a nice selection of moth-eaten neglected tomes from the days of Ricky Hill and Steve Foster.  In fact, Dad and I may be the first people in this pub to hum the Strictly theme as we ascended the steps.  He was Tess Daly obvs, I'm very much Claudia, we have lots in common, using Head & Shoulders, talking a load of shite, getting abuse on Twitter despite being 'lovely' etc. etc.  Liquid Len of West Bromwich fame reckons this is Tommy Robinson's local, it might be but he (LL, not TR) is such a wag, you never know with him if it ain't just a 'White House' gag.   Despite choosing a seat carefully, a man runs up to the table next to us singing Amarillo at the top of his voice, incorporating '204' into the song (the table number) so when he gets back to the bar, he can order his brekkie and remember the number.  Ingenious or a lunatic?  We moved seats anyway.  Later I went to the loo.  Everyone was scary, but you don't visit 'Spoons to not enjoy some mild peril now do you?  Classic pubbing.

Next up, the pub I'd most been looking forward to after favourable reviews from Twitter legends like M.Taylor and L.Foster.  It looked small and perfectly formed, the Kingsley Black or Danny Wilson of its day, perhaps, and a 'No Away Fans' sign actually reassured me.  I mean, I wouldn't DREAM of wearing your colours to Luton away, you'd have to be mad wouldn't you?

Great Northern (1551 / 2767) immediately lived up to expectations with beautiful green tiling, a lovely curved old bar, and plenty of ornate features for the pub purist to enjoy.  Plot twist though for the beer lover ..... just the one ale on, St Austell Tribute.  The 2014 BRAPA wouldn't have understood such a concept, but my beery forefathers have taught me 'less is more' when it comes to ale range.  And to get in the GBG with just one on seems a bigger achievement to me!  And as Dad noted, bar staff spent an age pulling through a Doom Bar that never materialised.  Ever seen Doom Bar as foreplay?  Nope, neither had I til today.  The Tribute was much cooler and crisper than I'd been expecting from recent reports, I had two and a half.  Our assembled Hull City group were soon all here, including legend Tom Irvin, BRAPA mainstay Ben Andrew, Tom's parents Chris and Bernie, another BRAPA legend of our past Chrissy A, Chrissy D, a nice lady who kept talking about Manchester for no reason, and her other half who attends home games and was wearing a Hull City shirt because, well, there's always one!  The barman told him "you are okay ...... FOR NOW...".  A few Luton fans in silly orange shirts even though they should wear white with a black trim and a Bedford logo blinked around the room morosely.  No one was wearing a David Oldfield wig though someone did cough in the Les Sealey style.   It was all very fun, I was encouraged to do my quiz early (Ben won, so he said) before the gang dispersed, though considering the one beer policy, which may have frustrated some of our group, it says a lot about the pub itself most seemed happy to stay.  The news that Tom had been getting free pints of blackcurrant cordial and tap water, even when he was only customer, is a mark of the class of the place.


But being a pub ticker, I couldn't relax for too long and an 11 minute walk took the majority of us to my third and final Luton tick, a 1pm opener so there'd been no need to rush.  I suspect they might open early on match days but there was no evidence of that online.

So yes, the Black Horse (1552 / 2768) and I know with the big group, the warm sun and a bit of ale already inside me it was hard to tell, but this was a peculiar mish-mash of a pub.  I didn't dislike it, but then again, it didn't really convince, despite some fine ale.  Oakham Bishop's Farewell and Burton Bridge Bitter, both a big 'YES' from me in their own ways.  Staff were pretty dreadful, not all, some alert and quite smiley,  mainly this one barmaid who served Dad whilst texting without even looking at him - she may've been relieved of her duties whilst we were there ..... seems unlikely but I have a vague memory.  A trip to the loos told of the seedier side of the pub, the brightly coloured walls throughout already made you think you were gonna catch a weird tropical penis disease from a fruit fly, but the skeleton with 'cocaine' on his head, weird condom artwork, and 'no more than one person in a cubicle at a time' just made me feel the whole place was a bit of a sleaze bucket.  Maybe it was supposed to be funny and quirky, but just left me wanting a shower (on my own).    Worse was to come as me and Chris I witnessed the worst VAR decision to date, as 'poor' Spurs got shafted at Leicester, and I know I have a few Arsenal readers so am being sarky.  Still, some decent beers, a few Luton fans meant decent pre-match atmosphere, left for the ground in pretty good shape!

Then something strange happened because Hull City played quite okay in the second half and won 3-0, when did we last witness such away day joy?  Ben captured it below, and as he said, I'm somewhere behind Hull City's Rev Richard Coles...... 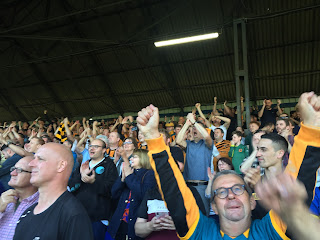 After the game, the gang headed back to London and wisely overruled my ambitious Hoopy and Grapey plan in favour of the new Euston tick, a good call, and a bit of a walk had me feeling better than the dehydrated mess I'd felt stood up on the train ........

Smelt ridiculously of food in Exmouth Arms, Euston (1553 / 2769) so we were all happy to sit outside, wasn't a bad location in truth despite HS2 boardings next door, and let us take time to remember how amazing that pint of Titanic Plum Porter tasted.  Dad boasted he'd not drunk too much during the day so he could especially enjoy this, but I had and I still did, so boo sucks! GBG mentions 'Burger Craft' and 'Boutique Hostel' whatever that means but it sounds proper 2019 London Pub Bingo Card, and yeh, they may've gone slightly for the American diner style vibe, but a closer inspection shows you plenty of nice old features dotted about the outside here - I've been to many, many worse pubs in the Euston area, pretty much all of them to be honest.  Oh, and I know what you are gonna say, 'Bree Louise was the best pub that ever existed on god's earth waaah waah waaah', but I never really rated that either so call me a heathen if you like,  But just remember I know more about pubs than you.  That isn't me being arrogant, simply a #BrapaFact.  Oh, AND it has a 'beer wall'.  Do you have a beer wall?  Well do you?  Thought not.   Nice way to end a cracking away day.

Though it wasn't QUITE at an end as I got myself and Dad halves in the Parcel Yard whilst he bought food, then we had an amusing train journey back and then I popped in to York Tap for a half cos I though Chris and Bernie who'd been on same train might be in there, but they didn't arrive, so must've got a bus home to their weird village.  I said farewell to Dad, then a drunk lady pinned me to a wall but it wasn't too scary, and I was back home for a bag of Snack a Jacks and an episode of vintage Sooty.  Job done.