My new L**ds debut pub tick should perhaps have been my easiest one to get done of the new 2020 GBG entries.  After all, I do work in the City of Random Shouting, and it felt like I could nip down at any time and get it ticked off.

But I hadn't accounted for opening times not matching those showing in the GBG ..... 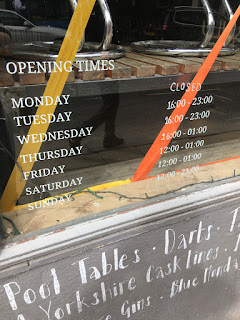 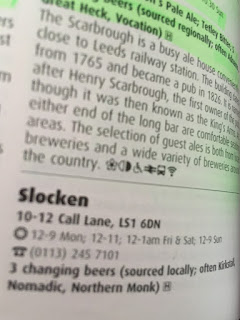 So after one foiled lunchtime attempt, Friday seemed my only real option if I wanted to do that first ever 'during work' tick.  Although I had to take a detour due to Climate Change Protesters (sorry Greta Thunderbug, but BRAPA stops for no melting polar bears), I made it down in ten minutes. 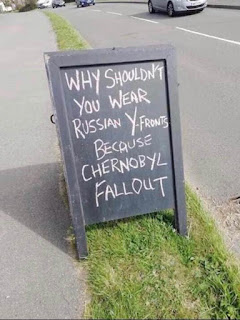 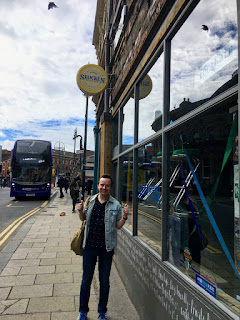 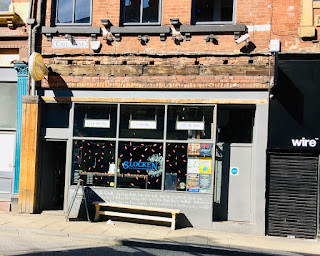 I was greeted warmly by Kevin (probably not his real name but it works with the blog title, no one who ever achieved anything is called Kevin are they?) at Slocken (1548 / 2764) and as the only other customers wisely got up to leave, he chatted to me on his pride at them being voted at least second best pub in the city, beating same owned but local rivals Wapentake, and asked me to reel off the L**ds 2020 GBG entries which I'm ashamed to say I really struggled on!  He told me his friend worked as Humphrey Smith's P.A. or something (he declined the chance to become his 'driver'), and thought GBG pubs needed FOUR cask lines on to be considered for GBG inclusion, which I told him definitely was an old wives tale.  Eventually, he went to make some phone calls, exactly the kind of thing you'd expect from a Kevin, so I basked in the one sunny seat, with my pint of ultra-murk going down well, reggae and northern soul creating what pub experts like me call a 'bouncy bouncy' atmosphere, even as the sole (or is it soul?) customer.  Shame I had to go back to work really, I was by now more relaxed than Bob Marley's sphincter after a sesh on the poppers.

Perhaps inevitably, karma decreed that I must be punished for my lunchtime frivolities.  And Banking mayhem blighted my afternoon, I eventually left 1 hr 40 mins later than I should've done due to some dormant account/Calypso issue you don't need to know about.

At one stage that afternoon, I'd vowed that I'd no longer do my after work BRAPA tick, but I didn't want to let the Bank beat me, so I set off in hot pursuit of my next alphabetical West Yorkshire tick.

A 50 minute bus journey from L**ds allowed me at least to shut my eyes and get a bit of energy back, as I arrived in Birstall for the first and only time since a drunken 2014 tick at the Horse & Jockey.

The new entry was a bit off the town centre, down a peaceful country lane, a lake on one side, the pub was around the bend (like most Birstall folk from the behaviour I witnessed in the market square).

A smattering of Autumn leaves noticeable for the first time this year in the fading light. 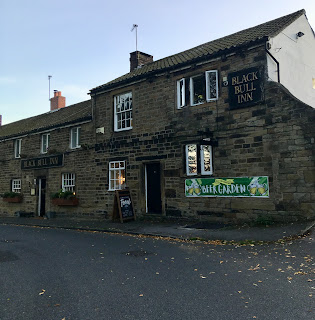 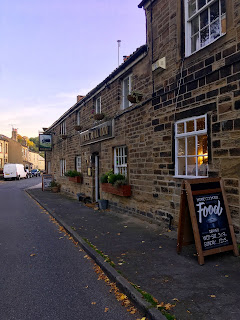 Black Bull (1549 / 2765) was a spacious dimly lit atmospheric pub of many rooms, a long building with a tuned-in barmaid serving a good (once it settled) Saltaire Blonde, which I think is probably the beer I've most ordered on BRAPA after work Tue/Fri West Yorkshire excursions.  It is almost everywhere.  And is generally reliable.  Peering around each darkened corner made me realise that whilst each room looked intriguing, most were hard to access.  A huge twog sprawled across the doorway in the room to the right, the main bar was made up of old men laid near on horizontal with clown feet sticking out, and the end snug contained a twild pair, eating their dinner in a separate room to their parents.  They looked like a young version of the Proclaimers, which unnerved me, so I perched in the middle room with the parents, two blokes playing pool and fake bookcase wallpaper, all by candlelight.  Watching pool in a pub stresses me out.  I don't mean to stare, I can't help it.  If the players are better than me, it upsets me.  If they are useless, it sets my teeth on edge.  I just need them all to be very average.  And if the older dude here could get his 'cushion game' going, he could've been a contender, yet he fell quite short of the required level of BRAPA pool mediocrity.   Drama from the snug.  "Mum, Dad, we've spilt the water!" screams a young Proclaimer running through.  Mum didn't have to walk 500 miles to get a cloth.  They later returned for a food summary, the garlic bread had impressed, the sauce on the chicken less so.  Soon, they swing their scooters dangerously around the pool table, put their hoodies up, and race off.  "Careful of the main road" squeaks Mum, but I later saw them loitering close to the lake edge, so I guess they were technically heeding the warning. 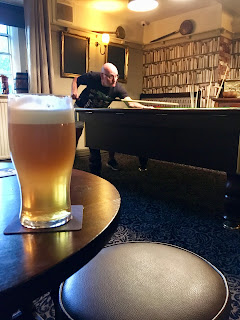 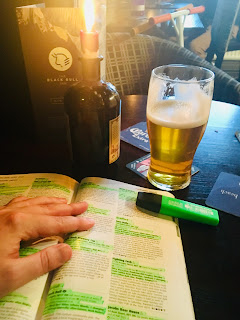 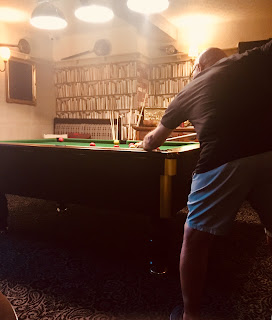 With an early start to Luton tomorrow, it was a case of get home as quickly as possible, which i did (much quicker bus, no train problems) and I was back in Yoik for a nice restful evening.