I must admit I awoke on the Saturday morning still a bit frazzled from my Tyne & Wear exploits the previous day, though watching vintage episode of The Sooty Show on YouTube til 2am probably hadn't helped.

Onwards and upwards, I was meeting Dad for a car day round some pubs quite close to York so I hopped in the shower, contemplating Selby feeling past my 'sell by', considering Goole as I washed my goolies, cogitations on Drax as I scrubbed my back etc (you don't need to know).

But as I dried myself in the methodical manner of a pub ticker and went for a bowl of Sainsbury's own brand weetabix and a mint tea, I noticed FOUR missed calls.  What was all this?  It was Father BRAPA.  He'd been up all night, poorly from both ends, and couldn't make today's trip.  I rang him, he sounded all weak and guilty for 'spoiling my weekend'.  I told him not to be silly, he does so much for me, these things can't be helped, get back to bed and rest.  #PrayForBernard

I decided to cancel today and do something on Sunday instead.  Of course, short notice train tickets can be expensive, rural buses don't run, so luckily I had a free London ticket, which I'd been saving for an emergency like this.

And it was to be North London the focus of my attentions, only 14 pubs remaining after cross-ticking.  I got on the High Barnet branch line that Tom and I had done back in March 2014 as a 'BRAPA trial run'.  'Twas a fruitful day back then, pubs like Pineapple at Kentish Town, Old Mitre in Barnet, Elephant in North Finchley, Bald Faced Stag in East Finchley all GBG regulars to this day.  Only the one at Archway where we met a three legged kitten called Legz who liked ping pong balls isn't in, and that was a fave!

My first stop was right up at the end of the line at Barnet, and after a brisk 15 minute walk in the lunchtime sun, came to my first pub ....... 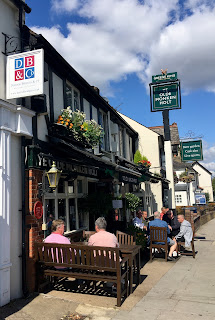 Always nice particularly in London that pubs like Olde Monken Holt are still being included in the GBG, full of jolly rounded old blokes with capillaries bursting from their cheeks and many noses, a whining dog blocking half the floor, a few Sunday lunchers, and a reassuring ale range of Landlord, Tribute, GK IPA or Abbot.  I went for the Landlord, as when it is good it is very good, and the pub just had that aura where I knew I'd be able to rely on the beer quality.  Finding a seat was the biggest challenge, sunny front outdoors was full, the lively front bar standing room only (anyone could've belted out 'Gertcha' at any given moment), so I ventured to the back.  The patio area seemed a bit dull, so I perched at a high table indoors, and it is testament to the history and old wood panelling that I could still sense the atmosphere, despite being cut off from the front bar drinkers.  Old blokes kept carrying outdoor chairs indoors, or bar stools outside, like no one could quite settle, but as I looked up at the female Manchester football derby, and later relaxed into the calming lounge style music which resonated perfectly with a Sunday post-lunch pub hubbub, I was content.  A really good start this, I kind of doubted it'd get better! 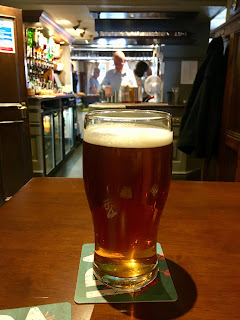 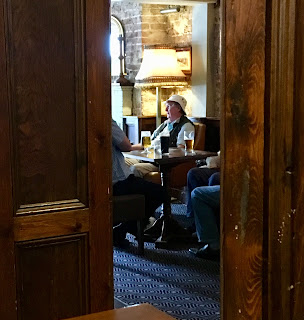 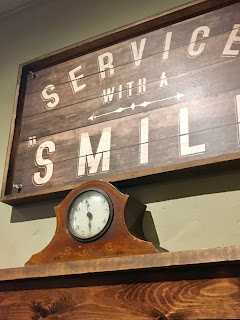 The next pub was a couple of stops down the line at Woodside Park.  And I remembered it was in the physical GBG copy of 2014 when Tom & I did that day, but I couldn't quite locate it on the App, perhaps cos West Finchley wasn't strictly the closest Tube stop.

No such problems today, five years of practice since, pubs don't escape me for long! (are you watching Slocken?) 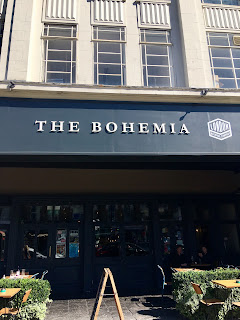 Like the equivalent of going from a freezing day outside to a piping hot shower, Bohemia was a massive culture shock after Olde Monken Holt which I wasn't really prepared for.  A London brewpub in fact, all exposed pipework, big air ducts, weird furniture and of course, plenty of folk who acted like they had no idea what a pub was.  And for once, we can't even blame Antic!  Getting served took so long thanks to a hesitant tourist group that I was able to reassess my beer choice several times, the 100 Oysters Stout and London Lush eventually being pushed out by ESB punk themed "Never Mind the Kent Hops".  It really did taste like Johnny Rotten's arse, probably, and a reminder if it were needed what a good drop Fullers ESB is!  For a building with so much space, finding an appropriate seat to get comfy at seemed needlessly difficult, in the end I was sat at an antique desk with opening drawers and a strange spotlight.  I had to sit side on along a long leather bench, so not only was the ale hard to drink, my body felt contorted throughout as well!   AND I had to try not to make eye contact with the three ladies dining just across from me.  At least a trip to the loo gave a nod to reality, as there was a dirty old tube of Fixodent atop the grotty urinal - a scene so incongruous with the other surroundings, it was like I'd been transported to the Anchor Anchor in Shropshire briefly!  Oh well, a tick is a tick, and quite a GBG regular, a good one to get done. 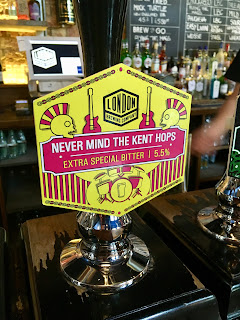 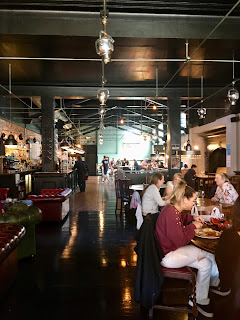 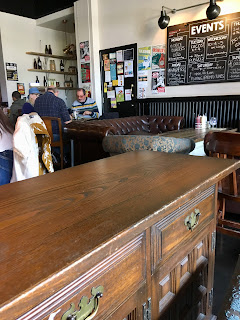 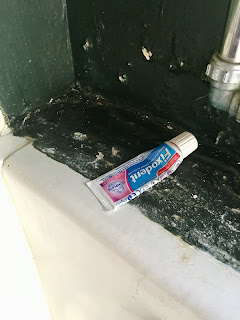 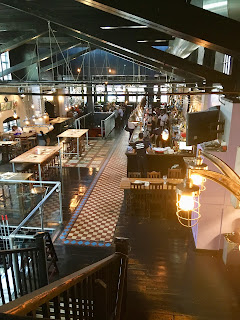 Nearly half way through the trip then, and time was of the essence cos the last train I was valid on back to York was about 18:30 so to get five or six in, I had to keep moving and not relax too much, not that there was much chance of that in Bohemia!

I'll tell you about those other pubs tomorrow,