BRAPA - 'I Saw the Crescent, Martin Drank a Pint of Half Moon'

The Waterboys eh?  Not really punk.  Not really snarling Poguesy Irish style stuff.  Well, not in this one song I know by them (they're probably speedcore Shane McGowan on acid normally), but every time they play it in 'The Light' Shopping Centre in L**ds on a lunchtime, I do hum along in a semi appreciative way, a bit like when Dire Straits comes on in a Peterborough backstreet boozer, or you're trying to enjoy a cloudy Jennings Cumberland on the outskirts of Hull.

On Monday night, it became evident that fellow pub ticker of some repute, Martin 'RM' Taylor, was in my hometown of York, pub ticking.  This was mainly a few York pre-emptives and two dodgy Harrogate newbies.  It'd be wrong not to meet up with him, right?

By 9:30pm, my Sainsbury's Delivery driver had dropped off my weekly supplies, commenting he prefers delivering 'out in the sticks' (well SOR-RY buddy!), and Martin was lurking around a dark corner ready for probably his 23rd pint of the day.  The ghost of Alan Winfield nodding away up there, somewhat appreciatively.

And the great Mr W would surely have been a fan of my local, Trafalgar Bay,  a one time GBG semi-regular back in a time before beer was precious and Sam Smith pubs got in without it being a noteworthy event (the wonderful Ebor at Bishopthorpe, a couple of miles away, actually still does).  York TWAMRA would rather champion the Rook & Gaskill cos it serves about 12 guest ales, even if they all taste like vinegar and the place is a cold unfriendly shithole.

It was a first time visit for RM (proved as he checks his spreadsheet online in the pub .... #PubMan) but unlike me, he doesn't believe in post-emptives so didn't record it in a gross tally as per BRAPA rules.

As we both argued over who'd buy the round, the jovial barman saw straight through us.  "You both just want to buy the cheap round don't you?"  We admitted it, and unbeknownst to me, I'd 'won' and was paying.

We sat to the right, the loud rattle of old blokes with dominoes and two other men chatting was quite high intensity!  This pub is really improved in the last year or two, as they found an old 19th century plan of the pub and 'put the walls back in'.  We all know multi-roomed pubs are the bees knees, shame they are so rare.

The OBB wasn't on top form, sad to say, as it has been better on my last few visits than it was tonight.

"It's a bit quiet around innit?" observed Martin, as we walked to our next venue.  Jeez, off-centre York, after 10pm on a Monday night, what was he expecting?  Las Vegas?  You ain't in throbbing sexy Cambridge now mate.

The intention of tonight was never to treat it as a 'BRAPA' event, just to have a couple of quiet drinks with a friend.  Hence my lack of photos to this point.  But all that was about to change ...... 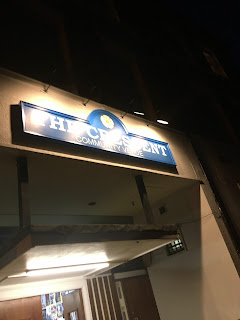 Yes, despite being 2-3 minutes walk from my front door, the Crescent Community Venue (was 'club', but I guess 'venue' is more likely to get nervous outsiders to come in) is not a place I'd been to before despite rave reviews about the place and sometimes the ale.  Kind of place people like Martin and myself like to see in the GBG, so I walked in with a beaming smile, and more local old domino players turned, but simply scowled in return.  #YorkLife.  The barman and his characterful eye was a hospitable bloke, telling us his brother does the cask, he does the keg.  He tried to talk to us about the beers on, we didn't give a shit but smiled and nodded, I ordered something I can't remember (possibly a BAD), and Martin got a 'Half Moon' which is always a solid brewery up here.  I wondered if Crescent and Half Moon was a coincidence or not.  We wandered off, bloke shouts "Pool table and all the machines are free if we want a game of anything!"  Martin trips over a table, and spills a pint of lager belonging to a bloke who's temporarily 'away', so we ran off to the raised area and tried to look innocent.  Barman and a very nervy guy in a hat and tracksuit follow us up to play pool.  They can't decide who is going to break, so they play rock. paper, scissors to decide.  They drew FIVE times, meaning the rock, paper, scissors lasted longer than the actual pool game.  Wow.   Nervy bloke keeps turning round and asking us "did you SEE that shot?" when he did something good or odd.  For a few minutes, I was no longer in York two mins from my flat.  I was in Ramsey or Chatteris or March.  Proper weird!  A bloke with an ape drape walks past to the loo singing in the club style, but high pitched.  York is usually so fucking boring, unfeeling, uncaring.  Yet a BRAPA pre-emptive can bring out the classic weirdness I find across the whole country.  Magical.  We may've swapped pints accidentally too.  And as for the beer, it looked like murky soup, and partly was unconvincing, but partly tasted absolutely wonderful.  Just couldn't decide.  But I'll look forward to coming back here with my York pals.  As Bobby Vinton's Blue Velvet played for what felt like the 15th time running, we noticed the 80's arcade machines were not here in an ironic sense like they would be in say, the local BrewDog, but in a 'they've been here since the 80's anyway' way, it was sadly time to leave. 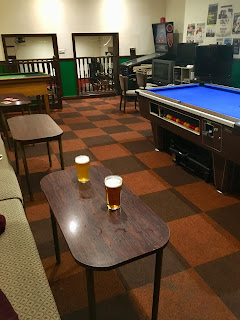 If drinking on a Monday wasn't bad and rare enough, Tuesday had been SUCH a bad day at work that when no nonsense Rotherham Utd Liam Gallagher enthusiast Dave said "ey up pal, fancy a pint after work?" I couldn't say no.  We went to something of a pre-emptive for me, White Swan, L**ds, a Leeds Brewery pub built onto the side of the wonderful City Varieties venue.


Just as amazing as the CCV in that I'd never been here before, but a lot less excitement to report, Dave downed two very 'crisp' looking pints of Amstel (was almost jealous!) whilst I had an American Pale (v.nice) and a Leeds Pale (way too warm, bit like a human organ in a glass, not sure which one).  Pretty chilled out place to drink, nothing really going on, friendly staff, bit expensive and like so many Leeds Brewery establishments, you kind of feel it started out a bit more pubby than it currently is, and has made more concessions to dining as time has gone on, something which I feel has blighted York's Eagle & Child and Duke of York, both of which have been in recent GBG's.  So if this one does every get in a future edition, there we go, ticked off in advance!

Now time to rest my liver, though hmmm, I can feel a tick or two coming on Thursday, so keep your eyes peeled for those ones ahead of the weekend.  I might go to the North East on Monday as no Saturday BRAPA, but as yet undecided.