I decided that if I really am going to complete the pub ticking of wonderful Derbyshire before the new Good Beer Guide drops approx 1st Sept, I'd have to get back on the 'Friday night post-work' trail, mopping up the more northern ones which are achievable from L**ds.

So after a slightly knackering journey, changing at Sheffield and catching a bus from Chesterfield station, I found myself on the northerly outskirts of Clay Cross where my first pub was located.

I nearly walked straight past it, thinking it was a local WMC (it actually had been before a fire destroyed it) and only the GBG sticker in the window and a small etched name on another window made me realise I was in the correct place .......


The inside of Rykneld Turnpyke (pub visit 1609 / 2578) didn't quite match the stoic, sensible exterior with plenty of bright modernism.  A multi-coloured zebra and a knight in armour holding his crotch were complimented by a shitload of handpumps (12?) with little jam jars.  And most noticeably, BANGING music.  This was my first pub as a bloke in my 40's and let us be honest, wishing they'd turn down the likes of Tom Petty & the Heartbreakers and AC/DC to a more palatable volume on a Friday evening is probably a sign I'm showing my age!  Consequently, I felt it only right to order myself a pint of 'Fun Sponge'.  Nice when you can take the piss out of yourself through your beer order!   I should probably sneer it was over hopped and not John Smith's Smooth enough, but I secretly liked it.  The din was intensified by a young couple teaching their two young twild twin boys ('twin' being BRAPA slang for 'twat twin' in this instance) how to play Jenga.  Jeez, they may as well have a screaming competition and be done with it.  Never has Stealers Wheels turned up to 11 been so welcoming.  And it was me, 'stuck in the middle' of very much a 'beer' emporium' rather than a 'pub', more so than even the one called 'beer emporium' I'd visit later.  I left feeling even older than when I'd come in! 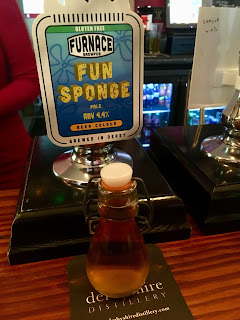 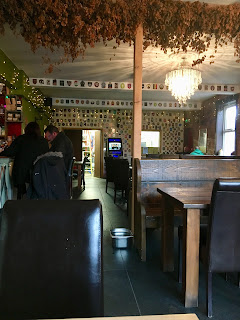 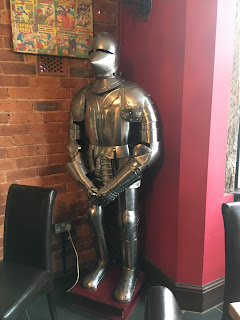 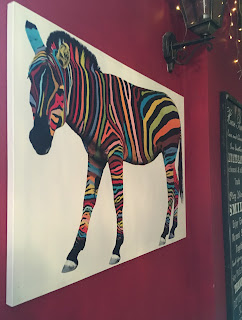 Now, I got the most shamefully short bus journey of my BRAPA life, to my next pub in North Wingfield, but judging by Saturday's events (stay tuned for tomorrow's blog!) I won't feel too guilty for this lapse into laziness.

Hidden off the main road was a new GBG entry which was actually a REAL pub serving just TWO beers.  Now that is bucking the TWAMRA trends innit?  Let's go in shall we ...... 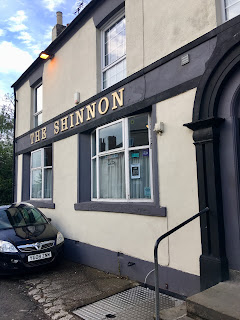 Highly recommended by shortbread snaffling, moth loving Duncan Mackay (a pub ticker of the utmost repute), I kind of knew this could be a cracker, especially when I read its name Shinnon (1610 / 2579) derives from an old landlady's hairstyle (chignon).  We need more pubs named after hairstyles, though 'Rounded Bob with Long Bangs' sounds like the kind of Lancastrian micro we all need to avoid.  I entered to the left, what turned out to be the main bar, mainly cos I followed a bloke back from the loo.  The remnants of a cake were on the table.  Seems a local had made it and brought it in to share.  Not for any particular reason, just because it is the kind of generous community thing that people do in proper places like North Wingfield.  Two local blokes helped me choose between the two ales, I went for the dark traditional one (Sheffield Crucible, very nice) to try and look more impressive!  I sat right in amongst the action, and it wasn't long before a lovely couple called Wendy and David spied my GBG and got chatting.  She was from Wakefield area so we went through the Beer Guide entries, and David worked abroad a bit which explained why he was more tanned than your average Nth Wingfielder.  Landlord Ian who'd earlier somehow seen that I'd needed serving despite being in a different room (sign of a quality gaffer) sat down and joined us, always keeping half an eye on anyone else who might need a top up.  He told me I was the 4th pub ticker he'd had here in the last year, though I got the impression some just stick to one edition of the GBG (sensible heathens!)  They reminded me I had a bus to catch so best get moving, love it when pubs try n get rid of me.  But Duncan was right as usual, a uniquely wonderful experience in the world of GBG ticking, one that'll live long in the memory.


I was well in time for the bus, and was back in Chesterfield 20 mins or so later for my final tick, which to my surprise, was a bit of a trek out of the town centre which was not the impression I'd been given in North Wingfield.

But with dusk approaching, down an unassuming side street, our next 'tick' came into sight and it looked a lot more pubby than I was expecting. 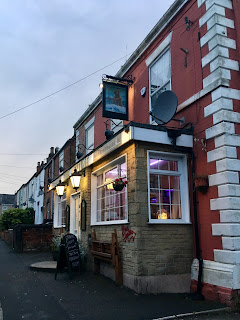 Now, quite why they thought it was a better idea to name it the Neptune Beer Emporium (pub 1611 / 2580) rather than the Neptune Inn listed as a location on Twitter, you'll have to ask them but it was very much a wonderful pub.  Okay, so not Shinnon basic old pub, but slightly brighter, shinier, but still very much a 'pub' pub (if that makes any sense!)   On entrance, slap bang dead centre, right in my eyeline, Titanic Plum Porter.  No idea what else they had on, BRAPA IPA?  Bass?  It didn't matter, I only had eyes for the TPP now.  Second thing I saw, a lady in the busy left room with a silver platter of sandwiches in one hand, sausage rolls in the other.  As she walked behind me to get to the right hand side of the pub, I moved deliberately and smiled sweetly hoping to make my presence known so once I was settled down with my TPP, she'd return and bestow plattered snacks on me.  But despite the locals not being greedy gannets and plenty of food remaining, not once did she return to the right hand bar!  This called for action.  On my table, a bowl of cheesy wotsits.  Well, if I wasn't getting sandwiches or sausage rolls, NO ONE ELSE WAS GETTING A WOTSIT.  Poor etiquette perhaps, but in that moment, I didn't care, I commandeered the bowl, and then scoffed the lot.  Made the Plum Porter even sweeter.  Take that Neptuners!   Got a few wild looks, but most focus was on a white shaggy dog.  A lady in extreme leopard print (the type you only see in proper Northern towns on a Friday night) popped her head around the corner and said "corrrrrr, ya dog looks like one of them white foxes!"  Dog looked at her like, well I won't repeat it, but it wasn't very complimentary.  Dog owner bloke knew that, despite Wotsit-gate, I was a decent guy, and left his dog in my care whilst he went to the bogs.  Brave!  Possibly my first (and last) BRAPA dog-sitting, the landlady who'd proved herself to be a warm hearted character from the get go, came over and told me she was jealous she'd not been asked(!)  Bloke returned shortly after, dog still breathing and in one piece, just glad he's never read my blog!  Some pub this.

My good mood inevitably couldn't last, for back in Chesterfield station, this happened ......

NOOOOO!  All of which meant I had to get that 21:44 to L**ds and change, so was back home approx midnight which was going to effect the time I'd start Saturday ticking, also in Derbyshire!

Join me for tales of that one tomorrow, it is seriously epic, and I don't even mean the pubs.  You have been warned.