BRAPA : Dolly Peel and the Bank Holiday Ordeal (Part 1 of 2)

Bank Holiday Monday must be the hardest type of day in the year for the humble pub ticker.

I'm not even talking transport, as you've got to expect buses not to run and trains to be on a 'Sunday Service' as we say i.e. unreliable and quite absent.

But you would be forgiven for thinking pubs would also operate a 'Sunday service' too, I did when I started this whole BRAPA business back in 2014.  It has since become clear however, that whilst a certain percentage of pubs indeed do go by their (usually generous) Sunday hours, a higher percentage go by the notoriously less generous Monday hours!

So when planning myself a little day trip on late May Bank Holiday Monday just gone, I needed somewhere with decent transport links AND pubs that open BOTH Sunday and Monday from about lunchtime, not closing mid afternoon either.

A scan of the GBG told me Derbyshire was out of the equation, North Yorkshire don't make me laugh, Notts looked shady, Lancs was shearing its sheep, hell even metrocentric Greater Manchester looked a bit flaky in parts.  Durham and Cumbria weren't worth entertaining.  So it fell on Tyne & Wear to potentially 'save the day'.

Fourteen pubs required in the T&W region before the start of play, with the Sun Inn in Swalwell the only one I didn't manage to complete last year, joined by 13 'newbies' who hadn't been in the 2018 edition.   Some debutantes, some oldies from previous editions.

I identified a few brewpubs and micros which were immediately deemed non-starters for today (High Spen, Tynebank and Wylam), but I had enough to go at.

I hopped aboard the ever reliable Metro at Newcastle Central Station, bound for Chichester (pronounced Chai-chester up here for some reason) which was lurking on the edge of South Shields, which has never been a lucky place for me despite some top pubs.  At least I got to see the best Metro station on the planet.......


Chichester was even greyer and drabber than 'Shields itself if that was possible, but I wasn't worried re opening times as the GBG and Whatpub both had 11am for Sunday or Monday.  Google knew better though, and screamed 12 NOON at me before I'd even started walking.  Buggeration! 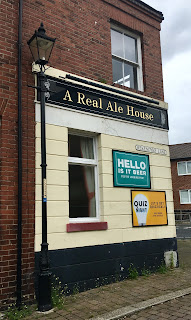 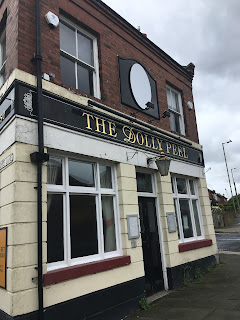 It was inevitably as dead as a doornail and with the time only 11:10am, I sheltered under a tree from the rain and phoned my Mum to see if she could make it open.  Even she couldn't.

And good things do come to those who wait here at the Dolly Peel, South Shields (1627 / 2596) as it was my most enjoyable pub experience of the day.  You can sense the history of this small yet multi roomed old classic from the moment you enter.  I told the barmaid I'd been stood in the rain 50 minutes.  "Sorry" she replies, looking genuinely sad, so I feel immediately guilty, force a smile and say "its okay, i got to have a nice catch up with mi Mum, and then a French Bulldog scowled at me!"   The choice is simple, Hobgoblin with flashing LED eyes or Timmy Taylor Landlord, so I went for the latter.  A touch warm, being first customer of day, she couldda maybe pulled it through but nae bother, warming like a good horlicks, full of flavour!  Two locals are soon on the scene, one resplendent in double denim and the kind of accent that makes Phil Brown sound like Brian Sewell.  Barmaid is a gem, so friendly, telling me the Dolly Peel legend (she was an old fishwife and smuggler with a cracking sense of humour - Dolly, not the BM, though she does). One of the blokes tells me he loves the 'Taps' from Newcastle to York to Harrogate etc.  Barmaid apologises for only having 2 ales on but they aren't the Freehouse they once were.  I tell her less is sometimes more, and tell the gobsmacked trio of Martin Taylor's 41 handpumps in Bowland experience.  They all agree this is going too far.  "How do they shift that?" says the Tap lover, adding "even York Tap only has about 18!"  I nod sympathetically.  They love the BRAPA concept, BM highlights my GBG cos I can tell she's worthy(!)  They seem to know every pub in Tyne & Wear and give me plenty of advice I can't remember.  I bid them farewell, and leave with a beaming smile.  Today wouldn't actually get better than this! 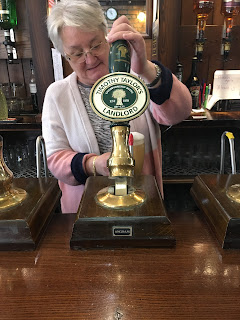 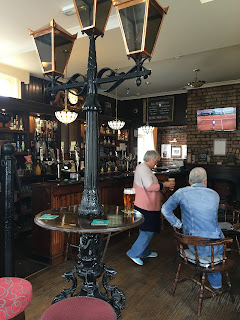 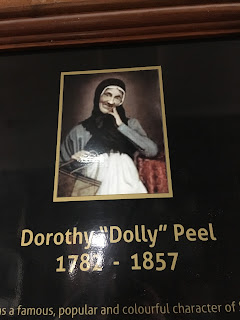 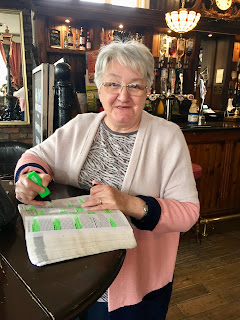 I won't tell you about any more pubs tonight as I've rabbited on long enough so will do a two parter, but my next nearest stop was Felling.  "YA DON'T WANNA BE GETTIN' OFF THERE!" shocked Sunderland AFC fans told me a couple of seasons back after a Hull City game.  The blokes in the Dolly Peel said the same just now.

But where there's a pub to be ticked, there's a need to 'brave' these sorts of areas.

This was actually my 'riskiest' planned pub tick of the day, as despite opening 12 noon on Sundays, it is 4pm Mondays.

And sure enough, despite being well gone 1pm, totally closed .......


History had repeated itself in a way.  On a previous Bank Holiday, I tried to get to the Wheat Sheaf next door to this pub, and had the exact same problem!  I later remedied that tick, and hope to be back to the Old Fox before August is out.

Oh yes, today was proving to be a struggle!  2.5 hours in and only one pub done.  At least Google Maps was telling me my next tick was only a 21 minute walk, so no need to hop back on the Metro.

More on that later in the week.   Cheers for reading marras.