I was here with my brethren (Martin Taylor of Cambs and Mark Daniels of Derbys) half way through a very productive day of pub ticking, striking right at the heart of Derbyshire, one of the most rewarding pub counties I've found so far.

Openwoodgate had been great, Bargate and Holbrook had had their plus points and down sides, but the best was yet to come as we sped into the chocolate box village of Makeney for pub 4........ 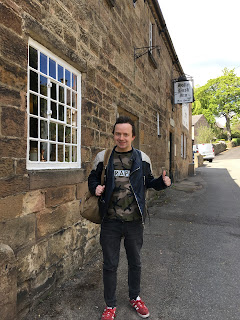 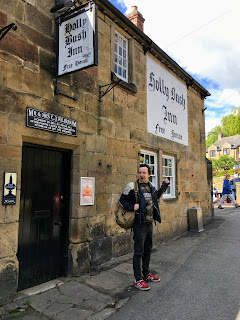 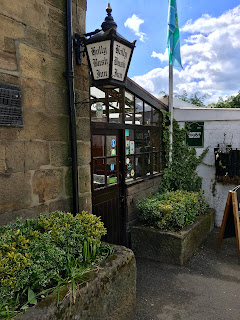 We entered the Holly Bush, Makeney (1606 / 2575) much to my surprise to a kind of old fashioned conservatory (well, room with glass roof!) with a small serving hatch where the beer comes from, like in t'olden days.  If my plans to have a "Pedi from the Barrel" (which sounds a bit like a painful foot massage) had been foiled slightly in Holbrook, here it was specifically written on the chalkboard.  The difference between this and the previous pint was a huge upturn in quality of ale.  And if I'd wondered if all these 'heritage pub' murmurings I'd been vaguely aware of would come to fruition, the best was yet to come as we entered the 'dark' part of the pub, most importantly a winning snug area.  It was one of those near religious still atmospheres, the type where time doesn't seem to matter.  Rare to find them, but you do, and when you do, pub ticking suddenly seems all the more worth it!  More so, Martin and Mark had (of course) been here several times before and told me it was so rare to find this snug empty and not full of locals, so I didn't take it for granted.  It looked like there was a similar snug behind this one!  And we remained calm and undisturbed til a couple who had that weird fish eyed look like they were from Hull or Canada walked in with the most gigantic dog known to man, certainly not suitable for a pub room this delicate in my view but hey ho, each to their own.  So hard to put into words, but my pub of the day in a day of great pubs, a real gem! 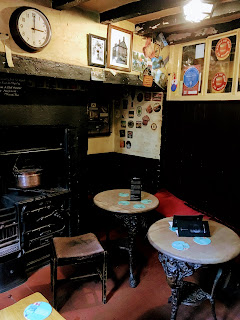 So how could our day keep apace with that level of genius?   Well, it was always going to be hard but remember this is Derbyshire, where they don't tend to do rubbish.

Our 5th pub was Mark's GBG local, though he admitted he didn't tend to go in.  Not that that meant it wasn't going to be good, after all, I did get attacked by the creeping ivy or something on the way in..... 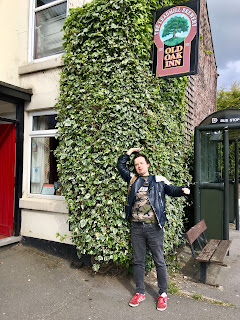 The Old Oak Inn, Horsley Woodhouse (1607 / 2576) in fact was more similar to the Holly Bush than you might imagine, entering as we did into yet another what can only be described as 'atmospheric conservatory' which had a small bar at the end.  I was fast losing my powers of observation but I suspect there was an 'actual' indoor pub (which from the brief glimpses I saw on the way to the bogs was very nice) but this may well have been the RuRAD bar that opens weekends only.  RuRAD to me is a basic but brilliant local CAMRA mag, a nightmare for pub tickers like me, delighting as it does in announcing the 67 new Micropubs which have opened within a 3 mile radius of Alfreton over the last week!   Unlike the Holly Bush, we didn't retire to an atmospheric indoor snug but this was a superb area to sit, all mosaics and plants and old decor.  I teased Mark that he was so knowledgeable on pubs (he'd even been asking Martin how he'd got to Whickham's One Eyed Stag in Tyne & Wear) he could be a 'ticker' himself, but he said 'no way', though at one point am sure he alluded to owning a pub 'database'!  Wow, even me and Martin only have a spreadsheet, and as you know, Duncan simply has each pub he's visited carved into a cave wall on the banks of Loch Lomond.  That bloke in Brighton with a wife as his pub ticking secretary probably gets her to knit him a doily of each pub he's done, the non-social media using baaaaarstard!  Oh dear, I was getting drunk, Mark did what Horsley locals do and went to buy some duck eggs.  I'd never seen one in real life  cos I grew up in Barnsley and Saffron Walden so it was quite a thrill.


It was time for me and Martin to bid farewell to Mark and thanks for a great day as we sped back towards Derby, but not so fast!  Martin needed an urgent loo stop, and I just had enough wits about me to remember I had another pub tick close to Horsley Woodhouse.  So we tootled up the road to Smalley. 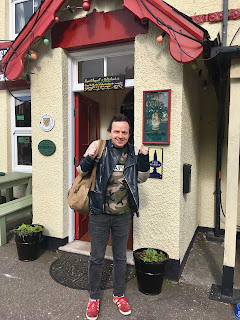 The Bell, Smalley (1608 / 2577) was yet another fine example of a beautifully formed Derbys pub (three rooms but only had eyes for main bar), seems the county can do no wrong at the moment in my eyes, I really hope Cumbria proves this rewarding!  As Martin rushed off to the loo, I ordered him a nice strong coffee and myself something called Grasshopper which tasted more a bit more appetising than the insect.  The barmaid and locals were friendlier in here than a few of today's pubs, and whilst my memories are hazy, I remember telling Martin I was impressed.  But it was when the most purple dressed man in BRAPA history (complimenting the deep reds and browns of the pub nicely) entered to add the final purple cherry on the day of a classic pub ticking adventure.  Significant too, my final pub tick as a 30 something. 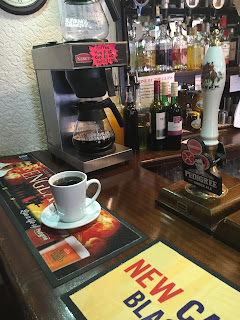 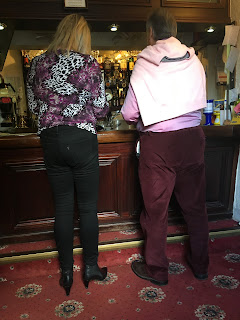 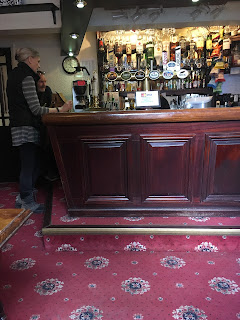 So there we go!  I ONLY have 37 pubs in Derbyshire left to do.  Would be lovely now to crack on and get them all done before the end of the summer, if we have a summer!  And in the BRAPA league table, Derbys jumps from 9th to 6th above South London (55), Cheshire (55) and Lancs (57) with 59 ticks.

See you for my next adventure,  am off for a really early night in the hope I feel 100% for a bit of cheeky Friday night ticking tomorrow.