No, I'm not talking about a L**ds United fan leaving Elland Road tonight, I'm talking about myself by 4pm last Saturday after a torrid first half of my BRAPA trekking from Castelton to Buxworth via Hollins Cross and Edale, very much accidentally.

New Mills Central was one stop further down the line, where my third and final Derbyshire tick of the day was.  It had a curious Micro outlook as I approached from across the street...... 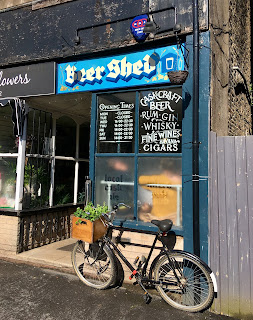 The Beer Shed (1614 / 2583) was as narrow and squashy as it appears from the outside, and I found myself involuntarily breathing in the entire time I was upstairs.  I told the barman I'd got here just in the nick of time, as he'd rolled his eyes to me at the sight of a large group of cooing women with double buggies arrived and shoehorned their selfish way into the pub.  Sadly, my Vanilla Porter, as nice as it tasted, smelt of baby sick throughout, and I think I've had this problem with Kelham Island beers before!  I perched on the smallest side table ever, only just room for my pint and phone, GBG perched precariously, green highlighter having to remain in top pocket.  Yes folks, THAT is what we were up against.  I was squashed by three blokes and a lady, but she started getting tearful and going off to the loo.  I felt bad for her and deleted all trace of her from my photos and nearly pulled the plug on this entire blog, a la 'Have I Got News For You' last week!  When she left in silence, smiling at me and returning a chair to my table (I wanted to give her a hug), two of the blokes told the other he was 'in the doghouse' and he replied 'wimmin eh?  Ya never know what they're bluddy thinking!' but it was clear to she was thinking 'he's a nobhead' the entire time, it didn't need a polygraph on Jeremy Kyle, whoever the fuck he is  Woke bloggers like me refer to this as 'toxic masculinity' and 'everyday micropub sexism'  #WokeSi2019   An even shadier chap appeared, encouraging people to nick cans of craft from the fridge.  "Everyone does it!" he claimed.  A bit of a commotion followed as someone with a fashionable beard had been on cask Thornbridge Jaipur all afternoon and was now struggling. "IT ... IT IS LIKE IT HAS GOT DRUGS IN IT, THIS STUFF!" he wailed.  Wish I'd spotted it earlier, but there was a hidden downstairs room, smelling all old and fusty, cool and damp and quiet.  I sat down here for the last 10 mins all alone, it was a relief I can tell ya. 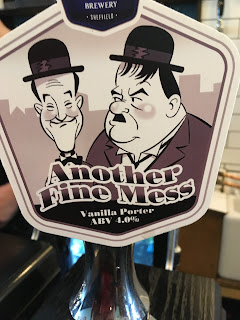 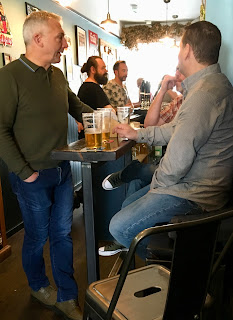 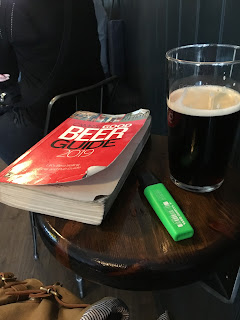 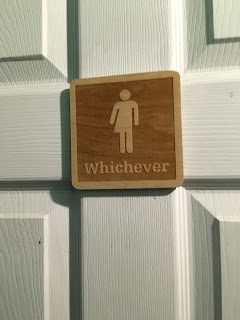 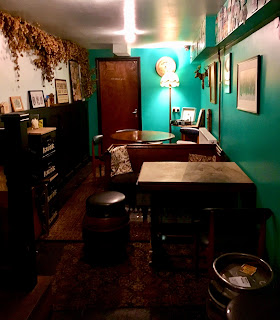 It's important you learn lessons as the day progresses, so I didn't try and do anything too elaborate regarding the other fairly nearby Derbys micro at Chapel-en-le-Frith.  That's for another day.

Yet, a voice in my head (possibly Mark Daniels from last week) was telling me with regards to the long standing 'tick' in Mellor, Greater Manchester, it was sort of now or never!

Yes, buses had finished running to Mellor for the day, and it was just as close to New Mills as it was to Marple so despite my poor sore legs, I started climbing yet again for another 2 plus mile walk.  It wouldn't have been bad in normal circumstances, but after earlier events, it nearly finished me off!

I've rarely been so relieved when the pub finally came into view ...... 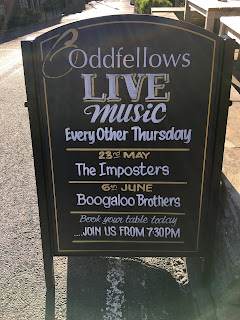 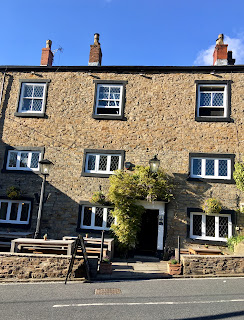 Always nice to tick off a pub you keep noticing in the GBG, but never quite get to, so I felt Oddfellows Arms, Mellor (1615 / 2584) was a satisfying one to get coloured in green.  Problem with the highly anticipated ones, you form an impression in your mind's eye and I was expecting something a lot more ramshackle and tumbledown than this, so was surprised and a bit disappointed by the level of dining and modernity I encountered.  And on arrival, it was that classic situation where everyone turned around to greet one of their local friends, saw it was me, I say 'hello' in a cheery way, and they kind of don't know what to do next and there's an awkward stand off.  Mellor didn't seem like a place where people liked eye contact.  Having said that, the young barmaid was a star and made a positive impression.  I paid her in 10's and 20's cos they were properly weighing me down, and she laughed, but might've hated me.  Probably not though, as she went through exactly where I could sit!  Something about 'even if they have reserved signs, I SHOULD be okay'.  I found it all a bit disconcerting as who wants to sit at tables with knives, forks, serviettes and menus anyway?  So in the end, I squashed into the end of a huge table for eight.  I couldn't push it out so good job all the walking meant my stomach was fairly flat!  Barmaid came around, mainly just so she could laugh at my slightly strained position!  Oh, and I should also mention the fantastic curvature, of the bar I mean.  My pint of Swinley Gold was top quality and a group of weird locals at a high table talked about 'mulch', 'drainage'  and other high octane Mellory issues.  A walk up to the Gents made me realise I could've sat in a perfectly nice seat up there and had leg room, so in this respect, it was a bit like New Mills in reverse. 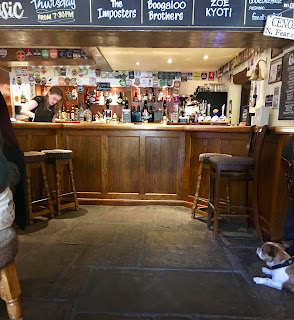 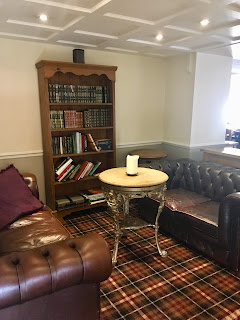 I didn't really want to, but another two mile or so walk towards Marple was the only way I could get back towards civilisation!  People in the Mellor streets kept waving and saying hello, making me feel the strange attitude of the Oddfellows dwellers was even odder.

Google Maps obviously thought I'd not had enough rural walking, and took me quite a picturesque way through woodland, hard to appreciate at the time as my legs were dropping off by now. 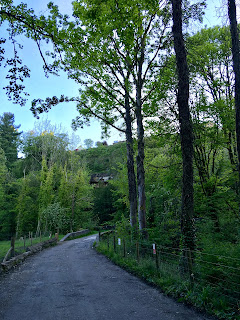 Fittingly, it took me past an old mill belonging to a local dude of our past called Sam Oldknow, as that was the first of two microey style ticks I had to do in the town, having conquered Marple Bridge the previous year. 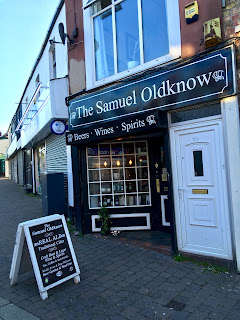 It looked a bit like an old sweet shop or DIY store at the time (though not particularly in the above photo!), but I thought Samuel Oldknow (1616 / 2585) was the more characterful of the duo, in terms of decor and layout and just had a much homelier feel.  It was full of thirty somethings (the youngsters!) with miniature mutts.  Despite appreciating the upstairs, the busy evening throng plus the fact I was seriously overheated again after all this walking meant I went to explore the donwstairs area of the pub.  The stairs had a 'safety gate' across it to stop drunken louts or twild life falling down the stairs, but in having to fiddle with it anyway, I still nearly went flying for a THIRD time today, which would have been a terrible waste of my malty ultra traditional local bitter.  I found myself outside in the smoking area.   A lady with dog who'd been causing a fuss when I'd been at the bar was asking around for a lighter, but having no joy.  "IT IS COS NO ONE SMOKES ANYMORE!" I replied when she asks me.  Not true, but I was in obstreperous mood after the day's events and was taking no prisoners.  "I don't usually, but it has been ONE OF THOSE DAYS" she replied.  Dare I ask?  Well, I didn't, cos her crazy little dog called 'Happy' started making noises she'd never made before.  Then he started peering through the back of the outside area and getting very agitated. "There's no one there, no birds, no cats or dogs!" said lady, having done a quick recce.   "SHE'LL HAVE SEEN A GHOST.  DOGS SEE THINGS WE CAN'T!" I told her (told you I was in one of those moods).  She seemed genuinely unnerved.  My plan now was to swiftly drink up, and leave her and Happy alone with said ghost.  But she finished first, and they left.  Leaving me as the one bricking it, all alone with the ghost FFS! 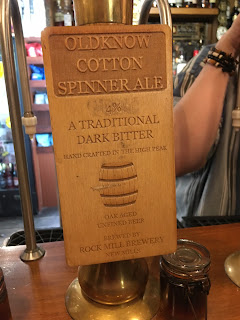 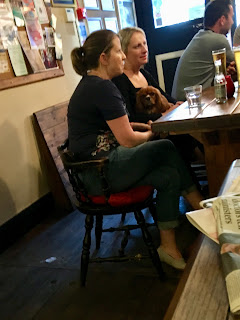 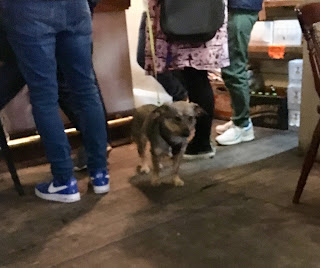 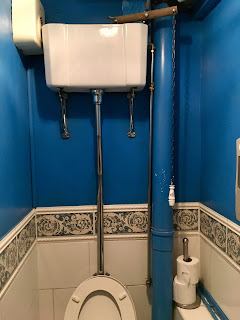 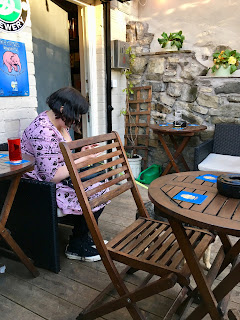 So, yes something of a relief that the other pub in town, Beer Traders (1617 / 2586) was much more your dull archetypal outer Manc Micro, reminding me a little bit of Heaton Hops or something similar.  Beer quality was a highlight, even at this late stage, candidate for pint of the day though no idea what I was on.  The barmaid explained she couldn't stop dropping stuff today, as she dropped my cash, pint, some keys and something else in the space of 10 seconds, and then at the loos, a young lad went out of his way to warn me about the 'hot taps' and then wished me a lovely evening.  Still, no seats inside so I went to sit out and watch the Marple sunset with a family who all wore matching puffer jackets, as families love to do in the north west.  But it got chilly very quickly, and a large group left, so I took my pint back inside.  Barmaid came over to clear the table, so I told her "I WAS SAT OUTSIDE BUT I'VE COME BACK IN COS IT IS COLD AND I'M NOT AS HARDCORE AS I THOUGHT!"  Jeeez, what was wrong with me this evening?  Can't be alcohol related, surely.  All the walking meant I felt strangely sober during my 5th and 6th pubs.  But she couldn't linger to listen to my nth level of 'banter', cos a guy was chatting her up at the bar.  Friendly place, just a bit boring.

So it was train back to Manc, glad I checked, nearly walked to Rose Hill Marple instead of actual Marple!  An exhausting day, but six more ticks, three in Derbys.  The dream to finish the county by 1st Sept is still alive!