It might seem a bit weird to accidentally walk 15.5 miles in a day including going over the top of a mountain (well, big hill) but nothing about striving to tick off every pub in the Good Beer Guide has ever been normal, especially in the British Real Ale Pub Adventure.

Late on the Friday night in Chesterfield, the train manager had been 'taken ill' and I wasn't really settled down in bed til 2am.  As a result, a later start on Saturday than I'd have normally gone for.

And the consequence of that was being part of, what was in effect, a 'Football Special' for the White Shite on their way down to Derby for what would prove a fruitful start to their play-off campaign.

I fought my way off at Sheffield and hopped on the equally busy Hope Valley railway service towards Manchester, but at least this time it was attractive ladies in their 20's who were filling the carriages.  After deciding against making a euphemism about 'Dark Peaks' cos as we'll see later in New Mills (tomorrow's blog), I am proper woke, I jumped off at Hope and walked the two and a bit miles to Castleton.

As it turned out, this was the 'easy' part of the day along a main road with a footpath, nice and flat.  It was bright sunshine one minute, grey skies and rain the next, and it was positively tipping it down by the time I encountered my first pub, which looked great standing majestically on the corner in a beautiful village, even by Hope Valley standards ........ 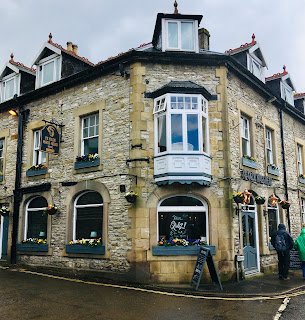 Olde Nag's Head, Castleton (pub 1612 / 2580) was one of those experiences which left me thoroughly conflicted.  On the one hand, you had a multi-room layout of such character (it was when I went to the loo upstairs just before I left that I could really appreciate this) with roaring fires which yes, were needed even in mid-May.  Some really fine quality ales were on as well, I was on one of those Dr Morton ones from Abbeydale, you know, they all taste like grapefruit and have an old fashioned Victorian style medicine label design making you think they take longer over pumpclip design than brewing, not that that matters to me, 'beer is beer Lewis' or whatever Morse used to say.   The downside of course, was my timing, late lunchtime on a Saturday in May as people took refuge from the rain.  Packed to the gills with a series of family types, twogs and twild life, "Mummy, I fink it's stopped raining!" whines the twild of ill repute on arrival.  Don't think so mate, I'm thinking, contemplating whether or not to wring my sodden hat over his cradle capped bastard ginger scalp.  A barmaid cleaned up pizza crumbs and smiled, and I was just happy to get a non reserved armchair seat, even if I was boxed in behind a pillar and unable to truly 'observe' as I'd like.  Still, no disputing the quality if you look at the bigger picture.  Bet it is amazing in winter.

So, I thought that despite being about a 15 minute longer walk, it might be more scenic and rural to walk from Castleton to Edale station, rather than back to Hope.  I'd given myself an hour exactly to do the 1 hour 4 minute walk Google Maps suggested.  Easy, I thought.

And with the sun now shining and beautiful cobbled lanes, 20 minutes in, I felt like I'd made the right decision, and I'd already made up at least 5 minutes so was 'on track' to make the train connection.  I even had time to laugh at a young family.  "Daddy, Daddy, can we have some pick n mix?" pleaded two young girls.  Mummy interjected.  "You can .... but you don't know what you are going to get .... it could be mint, it could be toffee, it could be ASH, or it could be RABBIT FOOD AHAHAHA!"

Wow, they've made pick n mix a lot more extreme since I was a lad!

But soon, I found myself climbing.  And climbing.  And opening gates.  And climbing some more.  I got a bit lost as a pair of twitchers set up their birdie equipment.  And before long, I was puffin' and blowin', head burning in the sun, passing all of these professional walkers, and I'm here in my BRAPA shirt and flimsy trainers.  "Keep going, you're nearly there!" said a man with a meaty German accent.  Where was 'THERE' exactly?  I had to break off for a breather, yet conscious the clock was catching me! 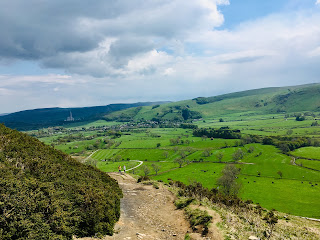 Soon, I reached the summit (of summat!), a quick check on Google now seems to suggest it could've been 'Hollins Cross' on the 'Great Ridge'.  Knackered as I was, the scene was made more surreal as a group of African women were singing Ladysmith Black Mambazo style whilst a group of local students interviewed them, and recorded them, holding boom mics up to the sky!

Another wrong turn and I now decided it was highly unlikely I'd make this train.

The descent when I found it was just as treacherous, at one point, a Geordie passed me and actually said "is the pub still open?"   I laughed, but then the 'ticker' in me kicked in and I thought 'SHIIIIIT, WHAT IF THERE IS A PUB UP THERE I'VE MISSED?'  Hope he was joking.

Then I fell over, twice.  Second time, straight on my arse in front of a couple with strong Nottingham accents.  They asked if I was okay.  "That is what happens when you lose your focus!" I replied in a barbed way.  (Tip - always important if you meet someone from Nottingham, make sure you blame them for everything that goes wrong in the world, it is what they expect from life).

Back down at the bottom on the home stretch to Edale, I was now convinced I'd missed the train so I hopped over a gate and washed my mucky trousers shoes, and face, in a stream.  Proper 'at one' with nature by now.  A bunch of hooray Henry's and Henrietta's gawped at me from the road.

I daren't overtake them, but a quick glance at my phone (now on 1% battery, charger buried at bottom of bag) told me the train was SIX minutes delayed.  If I could run, I could perhaps catch it?  I was 7 mins away.

Problem is, I couldn't run, but as the sign for Edale station came into view, the train started chugging into the platform.  I ran up the ramp, calf muscles killing me, still sure I'd miss it, but in a stroke of luck I probably deserved, a bloke in wheelchair was getting off so the train guard had to faff around with a mini ramp thing for him so I JUST got on in time.  Unbelievable outcome!

Still totally knackered, I got off one stop later in Chinley, where the pub was a 20 minute walk away in nearby Buxworth.  It used to be called Bugsworth but perhaps the insect connotations put visitors off so they added an X to make it more sexy.    Still red of face and legs aching to buggery, I staggered down the lane towards this beautiful pub ....... 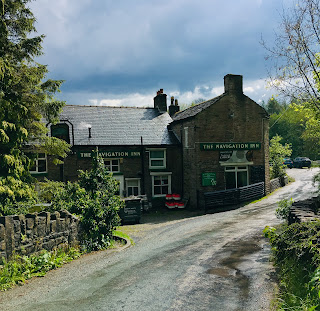 Yes, you can't deny the stunning location of Navigation Inn, Buxworth (pub 1613 / 2581) and the Tim Taylor Landlord was of splendid quality (remember, one of the best if you get it kept well) though £4.20 felt a bit of a stretch in a rural Derbys pub where staff glared at me throughout, and locals peered at me in a very insular suspicious way.  Still, my heavy breathing and red face was probably a bit too much to take!  It all meant I felt no qualms using up almost all their paper towel allowance in the Gents as I gave myself a proper clean up, with soap this time.  It all reminded me of my time in the Cuckoo, Toddington, back in 2015 where  I'd had an even more fraught walk from Eversholt and was even muddier, though being Bedfordshire, at least that was flat!   The pub again was characterful and multi roomed (some concessions to dining but not much to spoil it), and behind the pub, a lovely canal basin and friendly gnome in the garden, this place must thrive in the height of summer.  Determined to make the landlady smile (why DID she scowl so?) I plonked my empty glass on the bar and wished her the cheeriest farewell I could muster, and I got a crack of a smile and an assenting murmur.  I'll take that as a victory. 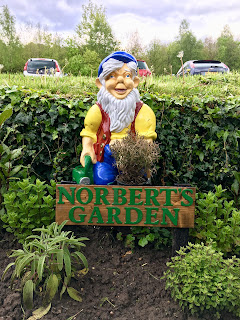 Surely the day had to get easier now?  But would it?  Four pubs still to go, dead on my feet and 4pm already, ugh! Oh well, I'll tell you about them tomorrow as I'm exhausted from reliving that crazy walk.