Thursday evening after work, and I was meeting West Sussex Twitter legend, a man with an anecdote for every aspect of life, and general Protz-botherer, John DepecheModem.

After a few lame ducks last time he was in town (my fault), I wanted to redeem myself and prove the L**ds pub scene had proper old greatness, so we started at the Templar, one of the more underrated jewels in my eyes. 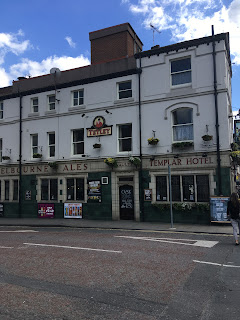 I was greeted by the ultra-friendly smiling landlady, and I just had to go for a pint Tetley's as I saw that sexy huntsman ogling me through his monocle .......


Sadly, it had just gone off but good news, she sent a stodgy man (hubbie?) down to the cellar to change the barrel.  Ok, so I had to stand there for about 10 minutes but it was worth it.  One of the best pints of Tetley's I've ever had.  Now here's an unpopular opinion you'll probably disagree with.  Tetley's is actually a better drink since it moved to Wolverhampton.  There, I've said it.

Anyway, apart from the usual slightly edgy over 50's crowd, this is a cracker of a pub..... 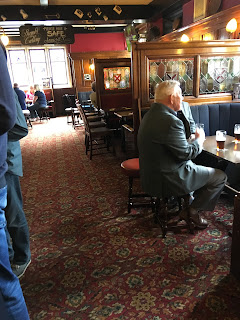 I found John in the back room I've never sat in before, doing what all good southerners should do here and try and blend seamlessly into the background.  Still, I couldn't really allow this to happen and John doesn't do blending in really!  The question all regular readers of my 'Adventures with John' subsection of my Blog will want to know is how is his gammy leg getting on.  Superbly as it turned out, he could almost be on a Veet advert nowadays.  Great progress since Darlington in November. 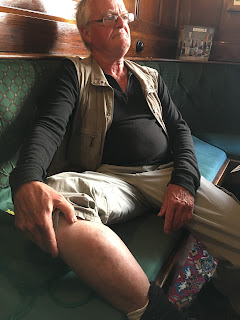 We had a nice catch up, and in a City still licking its wounds from its (some may say hilarious) midweek defeat at home to Derby, John had brought the now near-legendary Henry Winter article, which can now be enjoyed all over again in a new context ...... 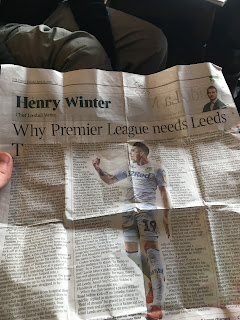 Time to try and 'wow' John with another lovely old L**ds pub.  This was an old favourite of mine, Duck & Drake. 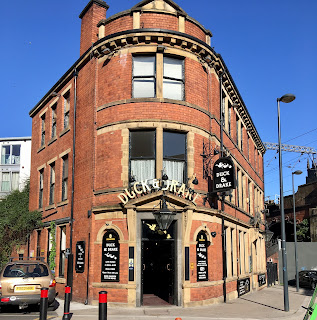 I take all first time visitors here.  In fact when the Southworth bros came over from American to say hi, this is where I met them, mainly so I could do a Blog called 'Dick & Dave at the Duck & Drake' but then I never did cos I forgot to take photos.

Despite the staff having downturned mouths like that Grumpy Old Pussy that died in the week (no, not Doris Day), the front 'live music' room had a soothing evening hubbub with the sun shining in to the spartan arena. 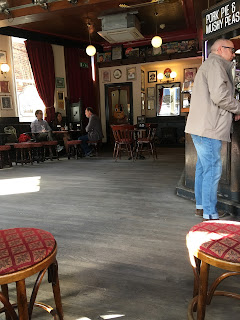 Pub could perhaps do with someone wiping a cloth across the odd surface or two, and the toilets smelt like they hadn't been cleaned since the rare urinals from Burnley were installed: 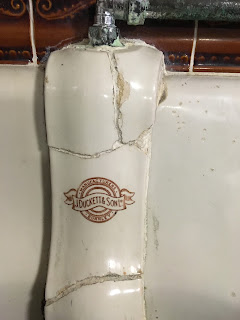 John, when he went outside for a smoke, noticed a scene that wouldn't look out of place in 'Britain's Crap Towns Guide' in a wonderfully arty kind of way, the location of this pub is in one of L**ds grimmer areas ...... 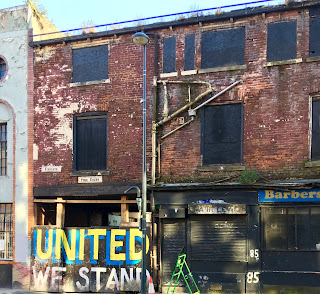 I said farewell to John, but I had 'official' BRAPA business to undertake too this evening.

Yes, my final West Yorkshire pub tick was in sight, just outside L**ds in a little town/big suburb called Morley.  An easy one to do, I was holding off for a work colleague who wanted to join me cos he used to live in Morley, but alas, even at the death, he couldn't quite make it ......

A long straight walk from Morley railway station (first time I'd been here) took me to a small orange building across the road ...... 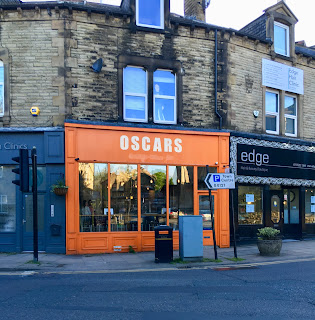 I didn't actually notice the mysterious figure (Oscar?  Eric Morecambe?) in the upstairs window until someone pointed it out.  But that was as characterful as Oscars Bar, Morley (1618 / 2587) got in what was a particularly drab experience, even by micropub standards.  I greeted the barmaid a bit more enthusiastically than I might've, for a split second, thinking it was Emily from work moonlighting in a new roll, as she too had blonde hair and a camouflage jacket to match the BRAPA home kit for the 2018/19.  I sat at a cold metal table and drank my perfectly okay pint of some mango infused porter or some bollocks, the other 5 customers making no eye contact throughout despite my best efforts.  It was so bloody boring, and I think due to my Templar and Duck & Drake visits earlier, my tolerance level was lower than usual.


I'm not anti-Micro per se, like most pubs, I find they can be quite varied.  There's a benchmark in my mind of good micropubs, something like Chiverton Tap in Cheadle Hume or Grocers in Cadishead, the latter being particularly remarkable as to all intents and purposes, it was very very basic but the 'human touch' made for a wonderful experience.  No, this was more on a par with experiences like Dr Phil's in Middlesbrough, Last Heretic in Burton and Hop & Barley, Lincoln.

Anywho, West Yorks done for another year!  No BRAPA next Saturday but am looking at a cheeky northerly Bank Holiday Monday/Sunday substitute, and may be able to squeeze something out of Derbyshire before the weekend.

Join me tomorrow/Tuesday for tales of Mansfield and beyond.