I was down in Mansfield on Saturday with my 'York mates' (as I've never referred to them before, just sounds like a cheap brand of condom really).  We try and visit the York pubs every Thursday, but once a year, if they are well behaved, I let them out of York so they can see how BRAPA operates.....

Let's introduce them and get the formalities done.  We have Chris 'Krzb' Britain (a Sheff Utd fan, chief planner, he booked our trains today), we have John 'JW2' Watson (a Sunderland fan ready for Wembley, he has a wife and well behaved boy) and we have Lee 'Jig' Johnstone (a Man Utd fan who is coming to L**ds Slamdunk Festival with me next Saturday, meaning I have to be 'imaginative' re next weekends BRAPA plans).

It wasn't a Mansfield debut for me, but my last pub tick, the Bold Forester, was done wayyyyy back on 6th March 2004, over 15 years ago.  It is STILL in the GBG.  The landlord loved me and Dad cos we drank real ale and he said everyone else in the town was a lager drinker.  There was about 11 ales on, they were all standards.  I moaned how I'd had them all before!  Nowadays, I'd be relieved they weren't brewed by the armpit of some craft kitchener brewshed's arsehole.  How times change.

On 12th September 2000, I came here to an unknown pub and confused a barman by putting an empty packet of my own Tesco Extra Value Ready Salted in a smouldering ashtray.  And on 15th April 2000, a Hull City coach from Goole pulled up outside the pub we were in (JW2 was with us that day too) so Dad panicked, got up, and bought us about 3 rounds in one go in case we couldn't get near the bar again.  Legendary.

As usual, it was pissing with rain as we changed at Retford and Worksop to get here, cheaper and better that way.  Pub one was very close to the station, hence the name ......


Railway Inn (1619 / 2588) ended up being our overall favourite pub of the day when we 'voted' on the way home, and it was the right decision.  A homely tight-knit pub was presided over by a super friendly landlady who tried to distract us from the serious amount of carrot chopping going on with her accommodating attitude, though not much gets past BRAPA so I wondered if the pub perhaps had a rabbit plague they'd learned to embrace, the most logical solution.  Good job Bishop Len Brennan wasn't here.  Despite the lack of Bass, all our ales (we each got a different one of the 4 on) came in Bass glasses, always a move likely to upset beer twitter.  Even a Gin Bar and a Nottingham Forest fan couldn't dampen the true pub spirit in here, and with some top decor too including a cross-stitch steam engine and old pub prints from around the UK, you had to say 'yes, this was the Mansfield I'd been hoping for in my mind's eye' prior to our arrival. 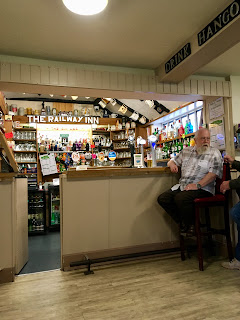 I expected Brown Cow (1620 / 2589) to be even more proper Notts backstreet boozery than the Railway, resting just off centre on the edge of town over a busy dual carriageway. 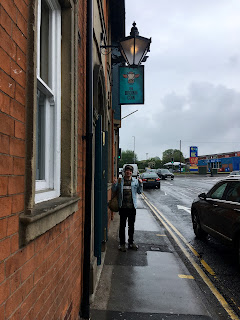 But despite the lantern outside (probably harking back to some pre-refurb when it was presumably better), this place a bit of a disappointment, the comedy cow making way to a modern interior.  With no staff in sight, I finally was encouraged to do as the sign said and 'ring for service' but right at that second, the bloke appeared who seemed a little bit short and snappy with us I felt.  Just like the Sun in Waterbeach or the Red Lion in Earby, what's the point having a sign encouraging ringing of a bell and then acting like the customer is being impatient?  We sat on some comfy but weird three quarter high stools, old blokes seemed to be drinking from behind a cage - very sexy - and luckily, Jig saved the day with one of his never-ending anecdotes which even BRAPA cannot reveal details of.  But the good news is (a) it was a classic and (b) it totally distracted me from the dross of this place.  'Moosletter' indeed!  My ale, something from an unknown local micro, was perfectly kept but an utterly vile drop.  Ironically, there was a 'home brewer centre' next door.  And next door to that, 'Big Baps' sandwich shop. Oh, and Johnstone's Paints opposite.   JW2 had suggested on the way we might get a pint of Mansfield Riding Bitter like the old days,  and more's the pity we didn't! 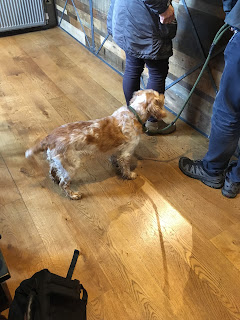 Mansfield looked a prettier place than I remembered as we passed under a viaduct/railway bridge thing by the sign of the old White Hart in search of pub three ....... 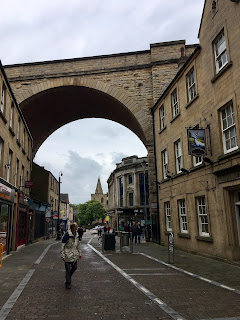 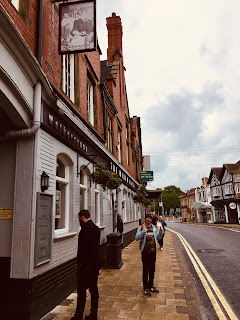 Well, it smelt like a 'Spoons.  It sounded like a 'Spoons.  And the people filling almost every table in the place looked suitably downcast.  Though let us be fair, it has be a particularly tough week for Wetherspoons clientele with the cancellation of Jeremy Kyle.  At the bar, FOUR Mudgie vouchers were exchanged for ale, giving us £2 off to help us pay for dinner.  Amusingly, there was an ale called 'Black Hole' next to one called 'Big Willie'.  "Yeh, someone's not really thought that one through have they?" admitted the barmaid as we smirked.  In the end, I got a Plum Mild.  Even that sounded wrong in the circs.  We sat down as tables started to clear when they realised BRAPA was about to judge them, and it was time for a first for me, as Krzb fired up the 'Spoons App and ordered our food off that.  How could this possibly work?  I had my doubts.  But we'd hardly had time to blink by the time a mechanical waitress probably called Chloe V2.0 (Tim Martin builds them in his shed) arrived with food.  My chicken strips and chipotle something went down a treat, and it wor off to pub number 4.  Great progress being made. 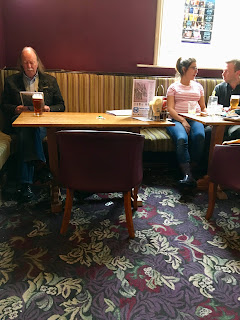 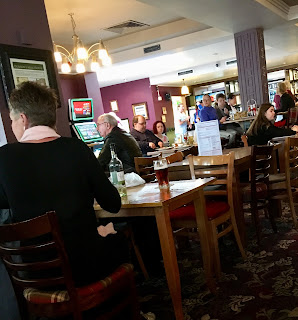