Halfway through our Notts day and having completed lovely Mansfield, it was time to spread our wings to brave new lands.

Those brave new lands' were Sutton-in-Ashfield, and Krzb, today's chief organiser, realised that as we were crossing Mansfield bus station, it made sense to hop on a bus here down the main road.

As we hopped off on a typically barren Notts main road, an angry Jig exclaimed "if we'd have been on that bus a minute longer, I'd have turned around and smacked those little shits!"  The other three of us were blissfully unaware, but Jig claimed the two chav lads behind us had been chanting 'baldie' at him for the duration.  "Perhaps they were just big fans of Garibaldi biscuits?" I hazarded, but Jig was unconvinced.  Oh well, time to go in pub number 4. 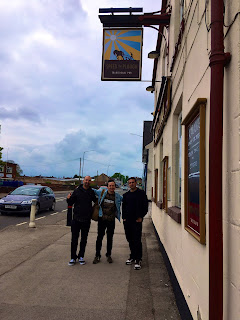 On the face of it, Speed the Plough (1622 / 2591) had everything in place to be a pub of the day contender, and it came close.  But it was just a little bit TOO miserable.  'How is this possible?' I hear you ask, and don't get me wrong, I'm as curmudgeonly as the next man (well okay, not HIM) but I often thrive in that mean moody old fashioned atmosphere.  We walked in, and the barman had been sitting on the wrong side of the bar with his mates, had to heave himself up and with some effort, pulled four pints of Blue Monkey.  Was it that we were a group of 4 lads?  Would it have been different if I'd been on my own, in my default BRAPA setting?  But those quirky signs on the walls near the bar that you often see about grumpy barmen and idiot customers just rang a little too true in here.  It was a classic stand alone road side pub, as we sat under a TV as the build up to some football match began.   But as much as I loved the old atmosphere, I couldn't quite shake the feeling there was just that something 'missing'. 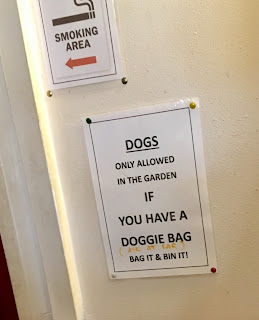 Our most complex walk of the day took us south towards Sutton in Ashfield station.  Through a little gap in a fence by some industrial units and over a railway line, came pub 5.  Unassuming, I was expecting more of the same as Speed the Plough, but if there is one thing M.Lawrenson has 'learned' me is never trust a pub with dodgy font scrawled onto a pub wall coming into sight before the pub sign....... 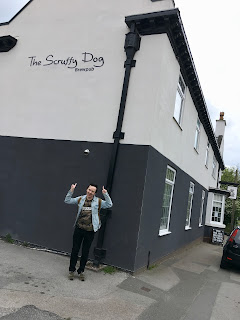 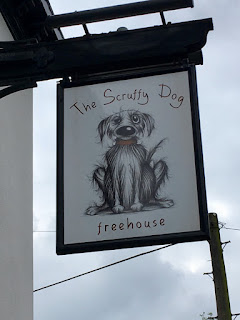 'Smell' is perhaps the most important unconscious way in which we judge pubs, and this was where the problem lay here at the Scruffy Dog (1623 / 2592) where an onsite brewery dominated the air, occasionally interspersed with the smell of wet dog, I counted 4 or 5 of the things scattered around the floorspace. It made for a heady, unpleasant mix.  The brewery must be a recent add-on, not present when Martin Taylor came here a year or two back, and history tells me they never 'add' anything to improve a pub, viewing area or not.  Let's face it, beer and the brewing process just doesn't excite unless you're really special.  Krzb did report though that the home brewed stout was decent.  It was busy too, the entire back room full of people watching this boring football match between a functional light blue shirted team and a pretty rubbish yellow and black striped team, strange as the football season is over so it must have been a pre-season friendly or something.   Nothing happened, and the mood got glummer as Krzb noticed our train was delayed, meaning we'd miss our connections at both Worksop AND Retford and get home a lot later.  Bugger!

After a pain-staking wait, we finally wound our way back to Worksop in the hope of a taxi to make up the time of our connection from Retford to York.  Sadly, nothing doing.  I rang three, one didn't answer, the other two couldn't get to us til 8:15, nearly an hour later.  Rubbish!  Whoever told me 'Worksop is a one horse shit town full of lazy mutants' back in the hard winter of '16 wasn't kidding.

But where there's lazy mutants, you oft find good boozers.  Krzb, as chief organiser of today's travels, seemed most despondent by this transport malaise, but two fave BRAPA phrases to remember.  "It is what it is" and "Every cloud has a silver lining unless you are in Maidenhead".   After all, I was gonna miss Eurovision, and you didn't see me miserable!

And the silver lining to this cloud is the Mallard, a gorgeous little pub built onto the station.  If I ever do a top 100 BRAPA pubs (which I will when I reach 2000), this is a contender.  Great I could show my friends. 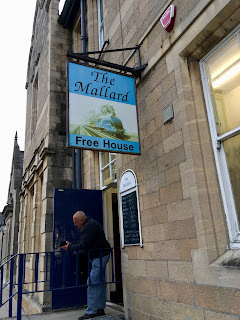 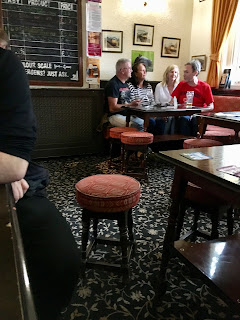 Exactly the same atmosphere as my New Year's Eve visit in 2016, the landlady wowed me and Jig with great chat and meticulously topping up of Titanic Plum Porter, pint of the day of course.  Locals chatted amiably, strangers were made welcome, including a camp Eurovision couple - the young lady wanting a drink .... "I know nothing about real ale!" she admitted, as every drink she seemed to suggest just wasn't available.  I thought about my work colleague Karl, and whether he'd get his regulatory Smirnoff Ice in here.  Anyway, upshot was, pub of the day, shame it was ineligible for voting on the basis it wasn't a BRAPA tick.  Sad face.  :(

Onwards and upwards, our Retford train was due and once back at the station, we had 40 minutes.  10 mins walk to the nearest BRAPA tick, which'd mean 20 mins in the pub only.  Oh well, my rules are there to be broken and was determined to get in number SIX, as the boys went in search of food. 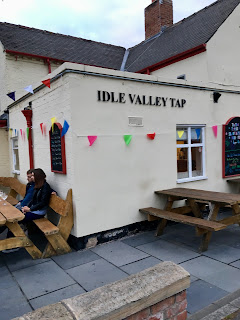 In a week which had already included a) the Brown Cow, Mansfield b) Scruffy Dog, Sutton in Ashfield and of course c) Oscars Bar,  Morley, it was something of a mark of respect that I saw the Idle Brewery Tap, Retford (1624 / 2593) as a serious contender for most boring Good Beer Guide entry of the week.  At the bar, a big jolly ginger lad was accommodating and welcoming, but the 5 barflies were rough as fuck and the old man in blue sneered at me behind my back.  Retford was totally dead to say it was, what, 8:30pm ish on a Saturday evening, and apart from a mean game of pool at the back, and a bloke who seemed to have brought in a mannequin / sex doll possibly based on Jig / late Freddie Mercury to keep him company, there wasn't much doing.  Walkway to the toilets probably the most characterful thing, revealing as it did the pub's original name.  Krzb, who'd earlier given me my return ticket (probably in case I got waylaid BRAPPING and missed train) came in to retrieve me, so my stay was 18 mins in total, but it was Jig n JW2 he'd been better off rounding up who'd spent a little too long in Tesco so we had to run for train.  But thankfully, we got it fine!

Back on the train home, time for a bit of grub (I of course, had my BRAPA snacks secreted in my bag) and back in York, me and Jig grabbed a swift half in York Tap, always reliable.  Jig chatted for too long, nearly missed his bus, so I had to drink his half too.  I was up to 8 pints now, and still somehow relatively sober!  You get odd days like this, but mostly I'm pissed by 3.  As the light started to fade, a bloke tried to make a 'house' out of beermats to excite his girlfriend of impressive facial bone structure who looked thoroughly unimpressed.  I was on his side though, and gave him all but one of the beermats on the tables near me.  The whole thing collapsed, and it was she who apologised to me!  Even in York, pub folk can't be normal......

And we'll have more tales about that coming up in a blog soon.

Great day in all though with the lads, Railway Inn, Mansfield won, Speed the Plough, Sutton in Ashfield Runner Up.