You can never judge a pub by its cover.  I should've learned this by now but sometimes, you can't help but have a prejudiced view of which pub you think you are going to prefer before you set out.

On Thursday, we had Dronfield Arms, Dronfield (1625 / 2594), a solid stodgy attractive building protruding from the main road a bit like your old history teacher a bit too pleased to see you.....


But once inside, it was underwhleming  Not rubbish, just dull.  Couldn't help feel the pub was stuck in purgatory, somewhere between a bar, an old pub and an basic micropub.  The narrow squeeze past seven old blokes down the side of the bar to get to the hand pumps feels like a journey I've made several hundred times in the last five years.  At least the barman was personable, we even had a 'joke' about the change I was giving him, but it was rubbish, so I won't repeat it here.  What's more, I thought I'd have to go for a 'Hopjacker' (according to the GBG, this is a brewpub and it is etiquette to drink the local brew in a place) but of the seven pumps, none were on so I had the ale my Dad can most not handle, Abbeydale Moonshine (a definite B+ from Mr Bentley).  No sooner had I sat at a rare swath of bench seating when the doggie domination kicked in.  A Perkins type and then a Biggins type who may well have been professional doggers (trainers I mean) wowed the locals with their hounds inability to behave.  The locals were excited, perhaps a bit turned on, saying things to the dogs like "no snogging you two!" and "oi, no sex here please!"  and I'm always suspicious of a pub where the dogs are the 100% focus of attention and amusement.  I'd rather having blaring TV's and music.  And of course, they were all the types who think nothing of pouting and nuzzling the dogs who then lick their lips.  Gross!  There was a haven in this pub, a slight raised area at the far end with settees, Bass Mirror, acoustic guitar and pinball machine of the past, though it felt like a token gesture to try and please the traditionalist.  Still, another Derbys tick off the list - only 29 to go now before 1st Sept!   We ended on something of a high, as the dog with the Dukes of Hazard neckerchief sniffed my feet and a Scottish lady laughed silently. 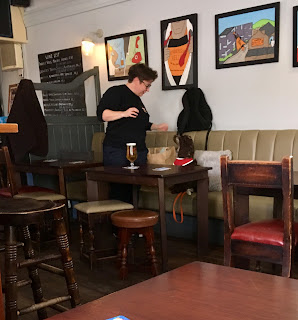 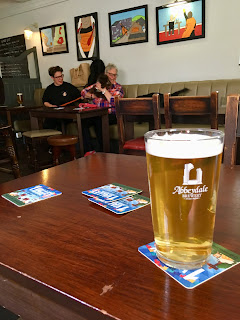 I took the L**ds train back as far as Barnsley, where I sat near a man wearing a toga, he had a flower shoulder tattoo, tan, well groomed black n grey hair and a small dog in a hold all.  Even by Barnsley standards, this was quite a stretch but I respected his individuality, putting me in mind of 'Friend of the BRAPA' Nick Bruels if he had a shock vegan realisation and was appointed Roman Emperor by dint of some crazy admin error.

Time for a bus to Hoyland Common, and I don't know what it is with the Hoyland, H.Common, Elsecar and Hoylandswaine area but local TWAMRA seem to love sticking a couple of new pubs in every edition of the Good Beer Guide.  I feel like I've been to this area about 50 times in the last five years!

And not far from previous (inferior) ticks 'Keys' and 'Saville Square' came this impressive debut Micro.

Again, my first impressions were inaccurate for it looked like the kind of place that, if the three little pigs (probably Sheffield Wednesday fans) lived here, it could be blown down by one lame puff.  But that's enough of about my homosexual wolf friend, time to go in .......


But I should probably have realised that any micropub that 'opens 8am for breakfast' (surely unique and quite incredible) was going to be a bit different.  This is one of the friendliest parts of the country from previous experience, and no sooner was I in when landlady and locals at the bar greeted me like an old friend.  Plates of food (chips in a polystyrene tray), bread & dripping, sausage rolls, pork pies and some pickles for one of your five a day were all in evidence.  And it wasn't just being told to 'help myself', it was being passed a paper plate and encouraged to tuck in.  Not about the food itself, but the people!  Still, I joined in.  Oh, and the lovely owner lady tells me off cos my rucksack is stopping her getting back behind the bar.  "You won't get a drink at all if I can't get past you!"  You wouldn't get that in a Central London Nicholsons.   Something in her dry humourous no nonsense manner and delivery that properly reminded me of Jo Brand. She'd been born and raised in pubs, and you could tell this was her domain.  As a local pretended he was on a reboot of Tomorrow's World and told the others about a Date Rape watch that was about to be invented, another bloke sneered at the bread & dripping.  I'd have barred him.  As I returned my glass (another top quality ale), they gave me a bonus bit of pork pie to take to the bus.  Lovely experience, and the place itself, despite being very micro and having that door open, still managed to feel cosy. 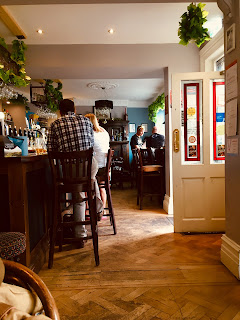 So that was that, a couple of bonus pubs to keep me going in the absence of BRAPA ticks, but I'll be up in the North East soon to see if I can offer Wearside any consoling words, or whether I should just go to Tyneside with my red & white trainers on in a stoic defiant act, which, if anyone questions it, are because I'm a Charlton fan!