I think it was modern day Oscar Wilde impersonator Ariana Grande who summed it up best in her Pub Ticking anthem "thank u, next", that you can't afford to wallow in your recent successes or mistakes and have to look forward rather than back.

Less than 48 hours had passed since I'd completed Cambridgeshire and made some good North London progress, before I was back on a train, north this time for Glasgow.

Yes, along with Rotherham's finest Dave Beckett and Woodlesford's Wonderwoman, Cathie West, we'd wangled an overnight trip to our Glasgow office to deal with the Chernobyl-esque fallout of 'Project Calypso'.  And speaking of mutated abandoned outposts, a Monday night in Paisley was top of my BRAPA agenda (I bought the others return tickets whilst in York so they HAD to join me).

But we didn't get off to the best of starts.  Whilst me and Dave got out of meetings etc at 4pm. Cathie was collared by Andy Gray (no, not that one) so we went to the Sir John Moore Wetherspoons opposite our hotel to wait.  It ain't a bad 'Spoons, I had three pints of real ale before joining lager lover Dave on the Tennents (well, it had to be done didn't it?):


The plan had been to get a meal here but Cathie's meeting overran so much, we decided to get ourselves straight to Paisley and grab a kebab on the way back!  Shame as the special Scottish 'Spoons menu had plenty of intriguing options ..... 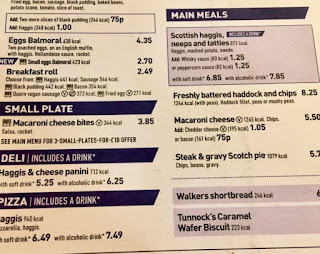 Once in Paisley, Dave sniffed the cold night air and said "reminds me of Rotherham" and it was hard to know whether this was the biggest compliment he could pay, or something else.

Our first pub, the 'Spoons, was right outside Gilmour Street station ........ 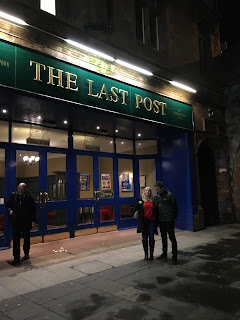 Why hadn't I brought my 50p off vouchers was my first thought, I could've saved £2.00 already tonight!  It was a quiet Monday night atmosphere in this former Post Office, with all its associated decor including a Gollywog, which Dave sent his Mum cos she collects them, though we suspected any Gollywog decor in London 'Spoons would probably have been removed by now.  The staff behind the bar yawned, stretched and made the huge effort to serve us, perhaps they should also have made the effort to drink the two giant cans of Monster energy drink, randomly sitting in a shopping trolley behind the bar - a BRAPA first!  I got an ale from Yeovil which was pretty decent, considering how bad my Scottish ale had been in Arnos Grove two days before.  We sat down and Cathie did the highlighting, worrying for a bit Dave had fallen out with her as he'd stopped speaking, but it was just that he wanted to give his full undivided attention to his Tennents and nothing wrong with that.  A better or worse spoons than the Sir John Moore?  I'd probably call it a dead heat.


A walk through Paisley's main shopping area, a bit of a ghost town on a cold Monday night in Feb as you'd probably expect, and soon we were at our second pub .........

It's probably hidden deep within the rules of BRAPA somewhere that when you enter a pub, you try and 'read the mood' and blend as seamlessly in with the surroundings and locals as possible.  But it isn't always that easy.  Especially when everyone is so bald and stoic and moodily watching West Ham v Liverpool with that expression that suggests they are trying to forget St Mirren are a 'thing'.  And when you are part of a half drunk giggling loud group of idiot English people, it is even harder.  Cathie wondered what 'Mungo' meant which was scrawled on a blackboard, so our helpful barmaid tells us St Mungo is this craft beer thing, and to my surprise, Cathie got a pint of it.  Well she had just downed about ten white wines to get over Andy Gray, so maybe a change was needed.  This was a glorious old pub, why watch Liverpool cheat their way to the title when you can admire such historic pub surroundings?  Some great snugs were down towards the gents, lovely stained glass, dark wood panelling, very photogenic, not that I photographed much of it!  Ok, so Cathie thought "spirit cocks" were something totally different, but we behaved ourselves on the whole. 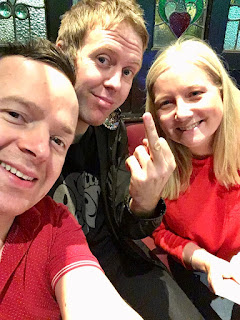 There was one last stop, and because Cathie's still inexperienced in the world of BRAPA, she'd read the GBG description of our next pub thinking it might be instructive.  It read "open mic night on first Monday of every month".  Uh oh!  "Am so glad I'm out with you two, I wouldn't rather be drinking with anyone else!" gargled Cathie.  Watch this space. 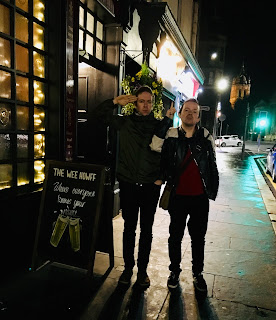 The 'small house' (as it probably translates into English, yes my great Grandma was Scottish so I am something of an expert on their strange foreign ways) was indeed a lively, bubbling, cacophony of joyful open mic night fun from the second we stepped inside, though to be fair, most locals were keeping themselves at a safe distance and treating it simply as a 'live band' night as a few jigs and reels were played.  "Ah, fresh meat!" thought the pushiest open mic compere in BRAPA history as he spied us, I lost count of the number of times he asked us if we'd go up and play or sing something.  Well, Dave is in an Oasis tribute band and plays guitar so me and Cathie tried to push him forward.  "It'll be the making of you Dave!" declared Cathie, though it was hard to see how a Monday night in Paisley could set you on the road to stardom, but who knows.  He's played the WMC's of Barnsley and Wombwell so has had tougher gigs anyway.  Soon, we got onto BRAPA so Mr Mic brings out the chirpy landlady to do the highlighting honours.  Then, they started offering around free pizza.  A real cracker of a little pub this, great atmos, so welcoming.  A great way to finish ......

The train journey back to Glasgow was amusing as me and Dave spotted a bunch of fare-evading kids trying to menacingly pace the carriage.  "He looks like a 10 year old Gary Neville!" I declared, so Dave told one of them.   Soon, his older brother appears at our shoulder.  "You been talking about my little brother?" asks his lanky older brother (not so much Phil Neville, more 12 year old Peter Crouch).  "Yeah, we said he looks like a young Gary Neville" replies Dave.  "I don't know who that is!" admits young Crouch.  "It's a compliment!" says Cathie, trying to be the voice of reason.  "It really isn't!" chime me and Dave in unison.  "Ok then" says young Crouchie, and slopes off.  Burnley is a long way from Paisley.  "He really did look like a 10 year old Gary Neville" shout two blokes to us who are sat behind us in the carriage watching the exchange.  Vindicated.

After quick pee in the street, I got myself a chicken kebab and chips.  Dave got pizza AND burger! Cathie got a kebab but fell asleep fully clothed before she'd even opened the bag, she admitted at breakfast next morning.  "Owwww, my head, am never drinking with you two ever again!" she claimed, as she often said to me in London, as I recounted what happened in the Wee Howff and showed her photographic evidence to prove we weren't making it up!

Back in the Treasury office where we had meetings all morning, they all thought we were mad to have gone to Paisley so I defended it against Glasgow and had to explain BRAPA about 10 more times, which took longer than our meetings to be fair.  Luckily, a nice lady called Janice gave me a bottle of Irn Bru to cure my hangover (which seemed to be from the waist down!) , I promised Liz we'd get to Coatbridge next time, I promised Nicola I'd get to East Kilbride, and I promised Sean I'd get to Rutherglen.  They're all 'Spoons ticks!

So a really good trip, and on the 1pm back to York with a couple more train beers and a Co-op meal deal!  Sorted.