'Twas Sunday, day two of my five day stay in the county of Dorset as I aimed to visit 30 pubs which would be a BRAPA record on one away jaunt.

As I jumped on the bus out of West Parley, I was smiling and feeling positive, after all, the Owl's Nest had been an understated gem.  But nothing quite like Bournemouth to extinguish all sense of positivity, once described in the Crap Towns guide as having "depressing labyrinthian suburbs and a determination to rid itself of any echoes of the past".

And with a series of Micropubs to visit dotted around such suburbs, all sprawled a couple miles from each other,  it was hard to argue with that assessment.

I hopped off the bus on Wimborne Road, perhaps the longest road in the world, in an area called Winton so I nearly called this blog 'Ale Winton' but thought it might sully the good man's memory.   The bus stopped, as they so often do, right outside my pub ....... 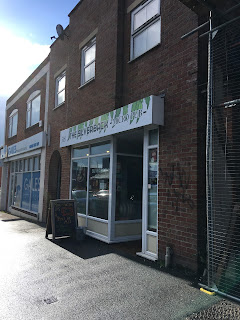 The first thing that struck me here about this micropub (apart from the fact I was the only customer) was the soothing medieval music playing, I felt a bit like Henry VIII walking into a very small averagely decorated palace looking for a wife and a swan to take a bite out of.   I was greeted by the very hospitable barman, a young man with a round pleasant face, pearly whites, a slight stutter, a twugby (England Rugby Union) shirt and a really nice way with him.  He pulled me a beer from the hidden kitchen sink area which seems to be the want of this part of the world, and returned to chat at length as I BRAPsplained him to death, poor chap, and he gave me lots of handy hints on the pubs and areas.  Most impressive, his report of great beer in Corfe Castle and most scary, the Child Okeford pub always being shut.  More on them in my later reports.  He was again interested I was from York, as he loved his history and wanted to do the Viking Centre and stuff.  After last nights duo, nice to be in a Micropub with room to spare though I hope business picked up for him.  Think he thought everyone'd be off elsewhere gearing up for England rugby by now, and I told him if this was Keighley (he was a big Timmy Taylor fan), no one would give a shit about this match, which surprised him.

On the walk down, Google Maps basically told me to stop being a fantasist ...... 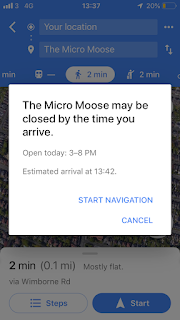 Alas, it was correct and I was wrong.  Instead, I walked the 2 miles or so back towards the centre through other labyrinthian suburbs, this time towards an area called Springbourne where I'd heard about a very quirky place.  This one was open at least, it was to be a rare positive ....... 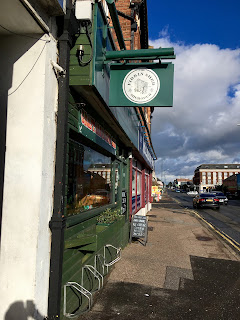 I walked in, once again the only customer, and although the young blonde barmaid temporarily stopped chalking up the blackboard to wish me a cheery hello, I could tell in her manner that this was to be no Silverback 'stand and chat' experience.  As I got my drink, an older lady wanders in with hubbie and screeches "CLOSED ARE WE??" sarcastically, alluding to the fact the sign on the door has swung round to show closed rather than open.  Barmaid Amber (?) grits her teeth with an expression of "DON'T YOU DARE START!" and tries to calmly tell her she had turned the sign round earlier. As I went for a pee, I decided this pairing must have some history and when I returned, noticed the man plating up heated Sunday dinners under tin foil for them both - of course, this must be her Mum and Dad! Surely bringing her dinner must get them back into the good books?  Well not for long as a disastrous mix up involving mint sauce and buttered swede which had barmaid screaming in disgust at the well meaning hapless duo.  The Dad kept talking about peas, not sure why. The food smelt amazing but the tension meant I couldn't help but feel I was the ghost at the feast (almost literally) sat in the far corner of a family home having a Sunday roast! I smuggled a disconsolate Scotch Egg from my bag, even Martin the Owl looked embarrassed for me.  To accentuate my current predicament, a gaggle of older people soon arrived.  There was lots of hugs and cheek kissing and I wondered if these were further extended family, especially when an old woman started cracking open a buffet on the table next to me - olives, cherry tomatoes, bread sticks, cheese, you know.  There was now me and one other bloke not part of this throng.  Were we offered to tuck in?  Not a bit of it!  The pub was decorated incredibly with skulls, puppets, retro vintage posters, but what's the point when the the human touch isn't there?  The mannequin by the entrance was the closest I got to acknowledgement.


My next pub was also listed under Springbourne, but even closer to the railway station, and the key word here was 'pub', not just 'pub' but oldest in Bournemouth I believe, so one of the few echoes of the past that remain, dating, it says, from 1847, it'd be a newbie in York but there you go! 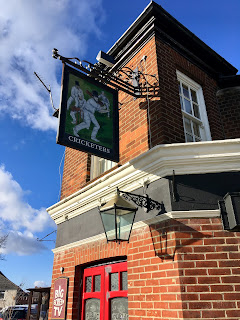 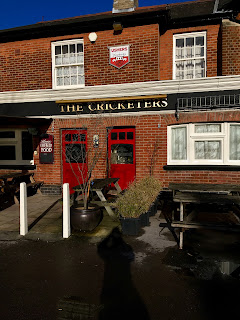 A bit conflicted I felt at the time, for I immediately fell in love with this place on arrival, had a real bustling community feel, a few people even smiled and made way for me to get in at the bar to choose from the reassuring range of London Pride or two others I'd both heard of.  A dog lay across the carpet in the sun blocking everyone and a sign indicated a meat raffle with some terribly drawn meats on a blackboard.  There was a Carling pump which took me back to 1998.  But all the while, I wondered if it was the dearth of pubs like this in a sea of micros over the past 24 hours which was making me feel so positive towards this place.  But on reflection back in the safety of my York flat, no, it was a true classic.  Stained glass, mahogany wood, the raised cosiest looking area was full of Twugby loons, but a sort of breakaway punk pirate back room had a small band of people watching Spurs v Leicester on what looked like an extra TV someone had wheeled in as a protest!  Of course, this is where I sat.  I could've ended up in a spot of bother, when on the walk to the loo, I came so close to standing on that damned dog so loved by the pub.  I'd have been turfed out of my ear'ole. Now, I'd never realised how stupid Spurs fans were til now, my room was full of them, and to a man, and especially one loud woman, made comment after comment to make the toes curl.  "If only Leicester had a natural goalscorer, they cud be winnin' us" said one bloke despite Vardy running around up front.  "Oooh that was a good kick forwards!" says the lady who declared herself 'Spurs mad', she'd been to 'the old ground' White Hart Lane.  Vintage.  Never have I wanted Leicester to win a match more, but all in all, it only added to the greatness of the pub. 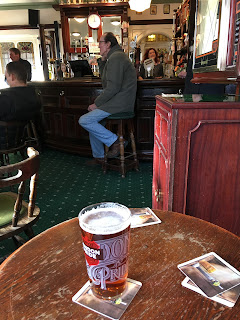 Well, this was all very nice but can't sit still in one pub too long in the game can we?  After all,  I wanted to get three more pubs in as afternoon approached evening to get back on track.  Join me in part 4 for more tales of 'Dorset Sunday'.