BRAPA - North London After Party : 'Spoons to the Fore as Arnos Bores

With a smile on my face as broad as a smug Bristol Rovers fan, I headed back into Kings Cross for some evening pub ticking, safe in the knowledge I wouldn't need to return to Cambridgeshire until at least March 2035 by which time March the town will have had chance to sort itself out and import some nice weird people with personalities from Ramsey and Chatteris.

What's more, Hull City were now 2-0 up and I'd booked myself on the 9pm train back to York so wasn't feeling any need to rush.

When I started pub ticking, one of the first things I learned from my fellow tickers was to be wary of North London.  Seems there was a feeling the pubs might lack character and perhaps a bit of charm.  With 16 left to do (11 in the North East, 5 North West), I can't say I've felt the pain too much (it's been a bit like pulling off a plaster slowly).

Worth also pointing out at this point in the day, two of the three I was aiming for tonight were Wetherspoons so I was most looking forward to the one that wasn't.  How wrong I'd be.

I shinned up the Piccadilly line as far as Southgate, where a girl twild was misbehaving in the most twild-like manner.  The mother made no effort to alleviate the pain that myself and my fellow passengers were feeling.

Southgate had a bit of menace in the air as I crossed for the 'Spoons, a Turkish man was smoking and quickly jumped out of the way for fear of my photography but he wasn't quick enough so looked like he might kill me: 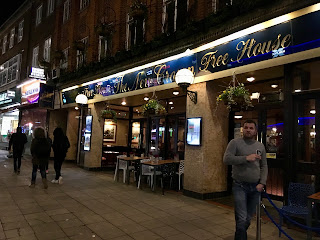 Wetherspoons first pubs were in North London (Muswell Hill to be precise which isn't far away) and this was an early example, so I expected a bit more wow factor from the carpet, but on the whole, it had a pleasing low roofed giant one room feel.   Some beer bore in a stupid Biggles hat (he smelt of local CAMRA) was faffing around asking for tasters, so I had to smile, when an older lady elbowed him to one side and went "Pint of THAT ONE" at the first ale she saw.  #PubWoman.  The staff were pretty on the ball, and soon I (by choice) had sat at a posing table (I would only do this in 'Spoons) not far from the bar to observe the goings on.  It was a throbbing atmosphere, a full cross section of society was here.  A group of excruciating Leyton Orient fans had got separated and were waving across the pub and shouting 'yoohoo' which is kind of the reason they never got the Olympic stadium cos they are basically hard to take seriously.   I'm not saying Wetherspoons never do beermats, but I'm finding it increasingly rare, so was pleased to see them here.  Okay, so it might've been a magic eye puzzle which spells out 'Brexit is Lovely' but a beermat is a beermat.  But the true centrepiece, a bloke on the Kronenbourg who'd brought an orange in with him.  He never peeled it, or took a bite, but he did occasionally bounce and juggle it.   When he left, what magic the pub had seemed to die with him.  His replacement, well, it was a bit like if Chris Kamara, Freddie Mercury and Kevin Eldon organised a kids birthday party, and no one wants that.  Was time I left.


Couple of stops back where I came from was this made-up sounding place called Arnos Grove.  But who cares, it had a pub which wasn't a 'Spoons yet in the GBG, actually a rarity in North London! Here's proof I wasn't making it up ..... 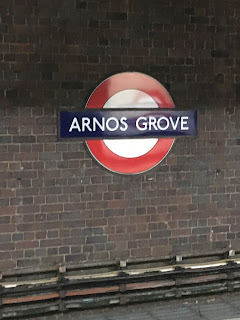 I walked towards the entrance, saw an old Bass lantern, ohhhh this was going to be good...... 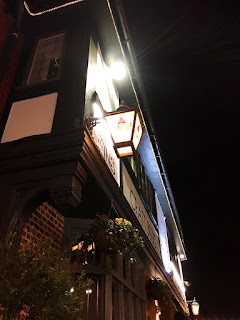 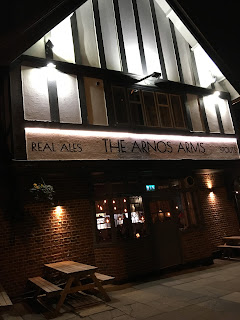 But the scales soon fell from my eyes as the first thing I saw on entering was a young Mum burping her baby, slung over her back.  I ordered a Scottish ale in readiness for Monday's trip, but the quality was poor, it was one of only two cask ales on amongst about 5 billion keg taps and I got that bewildered "are you actually paying by cash?" look as I handed over a note.  The far left of the building seemed to be dining room only, so I walked into the hellish right which was a mass of twild and competitive Dad's playing games.  There was pool.  There was bar billiards.  No one knew the rules.  There was fussball.  And there was an AC/DC pinball machine.  They all loved it, but no one had heard of AC/DC.  At least I was near a fake fire for a bit of warmth, but even this was in jeopardy as people kept coming in and out of a back fire exit which didn't close properly.  I soon learned that if I scowled at them, they'd make an attempt to close it properly, whereas when I smiled, they just left it hanging.   A metrosexual bloke stepped out of a Next catalogue and straight into the pub.  He hugged a group of about six people he'd probably paid in advance.  London man hugs.  I wondered what Dad would make of all this, I think I knew the answer.  A dire pub for me, it'll appeal to some folk, somewhere, but not the type I'd want to be stranded on a desert island with! 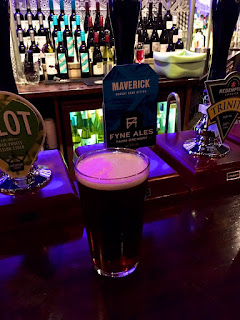 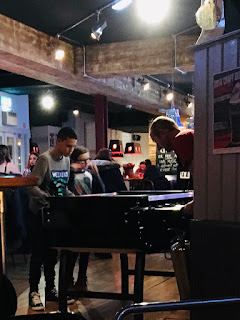 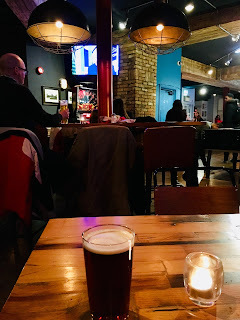 On the plus side, I was outta there.  On the downside, the clock was ticking quicker than expected, and delayed tube down to Holloway Rd didn't help.  Am sure Tube advertising is getting ruder .... 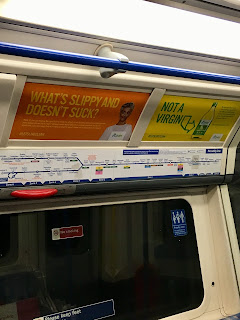 So I had to race down the road so I could get my 25 minute quota in my final pub, another 'Spoons, maybe it was safer that way?   It loomed large glowing a dodgy neon red in the distance ..... 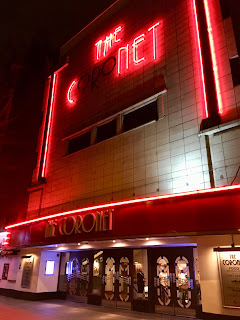 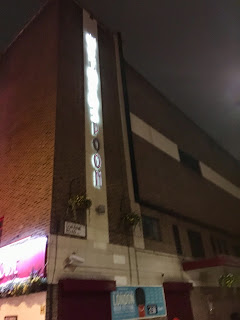 Rare you wander into a 'Spoons and feel a bit blown away, but I was well impressed from the moment I stepped inside, kind of the opposite of the last pub.  You just can never predict what's going to happen in the world of pub ticking, that's why I love it so much!   The thing that struck me first was how amazing the staff all were.  How many 'Spoons do you go in where they all smile and say hi whether they are serving you or not?  I ordered a pint of 'Standard' from the Cronx in Croydon.  This was the lowlight, I don't even fancy it was kept badly, I just think it was a disgusting beer.  Murky, tasted like cooking apples, I know that sounds like it was off, but am not convinced, smelt fine.  I need to visit that Cronx place but from what I've seen, looks a bit scary!  I walked into the bowels of the pub where they had giant screens, a raised middle section, so I got in a huge booth to the back left of the pub.  If we are talking cinema conversions, it even made Picture Palace in Ponders End look lacking and I liked that, and was a million times better than the crummy Ritz in Lincoln.  "Bottle of Prosecco mate?" asked a barman randomly.  I looked at him like "if this is a practical joke from that Martin Taylor chappie, then you can tell him I ain't laughing!" but he soon realised he'd got the wrong table.  Whoever had sat here before had tried to mop up a drinks spillage with a laminated plastic menu.  "You really wonder sometimes don't ya?" said the barman, returning with a cloth.  "You really do" I replied.  "Yes, you really wonder about people sometimes".  He replied.  "Absolutely" I replied.  We could've gone on like that all night, but I was clock watching sadly, had to sprint back to Tube for Kings Cross, and was well gone 20:30. 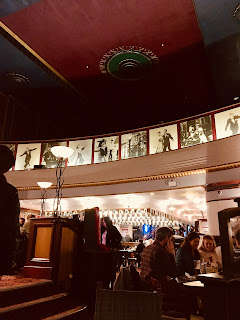 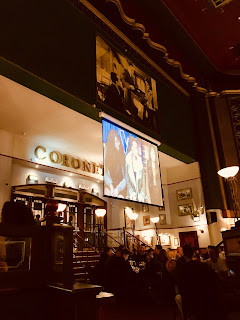 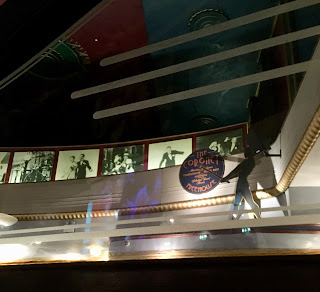 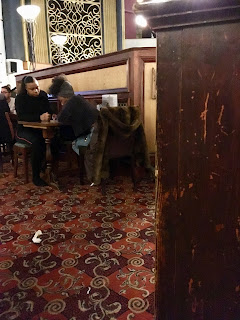 I got back to Kings X easily for the 9pm as it happened.  I thought I was feeling ok, despite a very drunk obnoxious group of Geordies on their way back from a lunchtime Spurs defeat.  The conductor ended up asking us all to move to another carriage to make our journey more pleasant as even with my amazing noise cancelling headphones, they were grade A nobheads.   Sadly, I couldn't remember this photoshoot I had with Martin the Owl til I saw the pictures on Sunday but looks like we had lots of fun..... 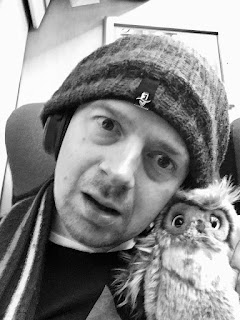 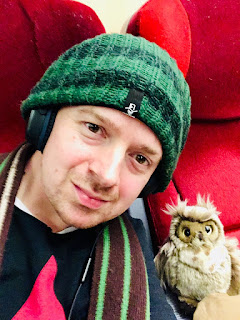 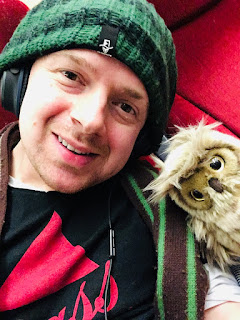 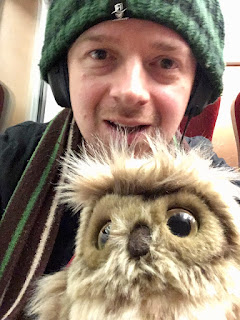 Oh dear!  Well it HAD been a long day.  Anyway, I'm staying in Friday to get caught up on my blog before the BRAPA Winter Festival begins in force on Saturday mid to late afternoon, so look out for my Twitter check ins.

As for North London, only 13 pubs remain.  6 of them are Wetherspoons, one's a brewpub, one's a gastropub, one's a micropub, one is a bar refusing to use the word micropub, and the other three might just be solid old boozers.  Aim is to get 'em done by Sept, along with the 5 I need in East London.  West London isn't impossible, but still tonnes to do in the South.