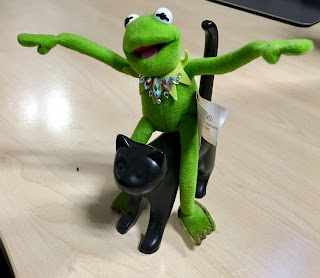 'It's not easy being green', said my highlighter pen halfway through day three of my Dorset adventure, what had so far been a fantastic trip around the Isle of Purbeck.   I was approaching an amazing landmark, a third of the Good Beer Guide, that is 1500 pubs out of the 4500 total.

If Swanage had seemed a little peculiar, it was ramped up to full blown 'weird' as I waited for the bus to take me back to something approaching civilisation.  A lady was entertaining the old folk by talking to her miniature dog.  A man had brought his dustbin along, it likes an occasional outing on the Breezer.  But both were overshadowed by this young woman loudly speaking down the phone to her Mum, recounting various doctor trips and prescriptions.  The bus driver curled his toes when he saw her getting on, he didn't get a moments peace, none of us did!

Luckily, Langton Matravers wasn't far. I pressed the bell and he grinds to an abrupt halt.  "There you go, right outside the pub!" he declares.  "You know me far too well!" I reply, but then he looked a bit scared, he wasn't expecting that. 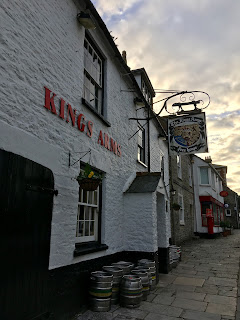 In many ways, there was no reason why this couldn't be a low-key rival to the Square & Compass, with its rambling, ramshackle ancient interior, the first thing you see is actually a well polished Bass mirror, the cleanest thing in the pub.  A confusing myriad of small dividing rooms took me further right than I'd expected, and although I could see the barmaid and ales through a glass divide, my arrival was not welcomed by the other bloke in this room, who seemed to be on an urgent phone call and started frantically gesticulating to the barmaid to get me into the main bar to serve me.  I'd already taken the hint!  "It's okay, you can go back and sit in there in a minute, he was just on a call" she said.  I liked her, gap in front teeth, look of humour in her eyes, tiny pub dog called Ernie refusing to do anything he was told.  I ordered a pint of Sunbeam, not because I was trying to force Gordon Banks to die, but because my Dad also had this ale in here, and you can't do too much better in a Marstons in my opinion.  The three old blokes dotted about the main bar were obviously characters, but there wasn't really room for me too, so I headed left this time to a curious room with a tank full of black and yellow frogs, lizards and beetles.  It seemed rather incongruous, especially as it was on the same shelf as jars of local jam and old books! Although multi roomed pubs are great and all, I felt a little bit closed off from the action here, and just didn't 'feel the magic' as a cosy old hostelry, for all the promising outward signs the pub had to offer.  A young bloke with a picture of Harry Kane on his tee shirt came in.  "Wotz wrong wiv Chelsea lads, why are they rabbish?" he asked.  No one knew the answer.  "I'm more of a rough onion man myself" said an old bloke, but I think this was in relation to something else.  And later, he broke my 'WokeSi2019' code of ethics by returning to the bar, asking "Can I have a girlie half this time?"  Brave, surprised she didn't lamp him.  I really had to nurse my Sunbeam (decent quality, no more) as I had a long wait for the bus, so just did a bit of BRAPA strategic planning to pass the time.  A pub that promised a lot, but somehow, despite being good, didn't really deliver. 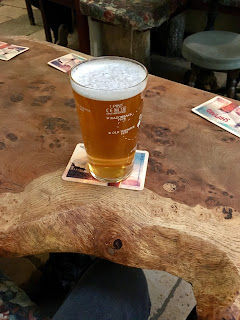 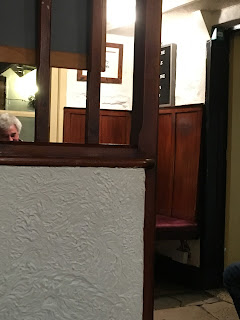 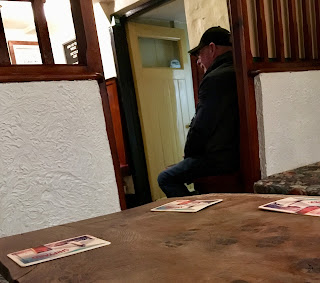 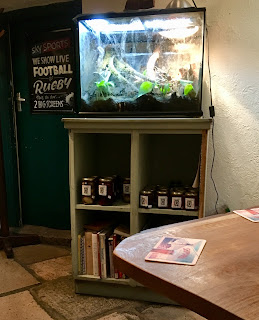 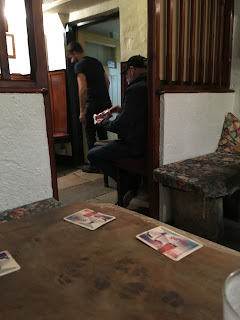 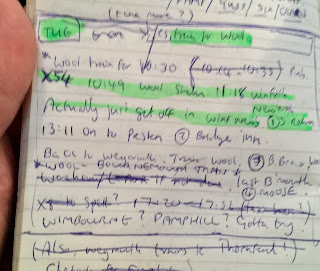 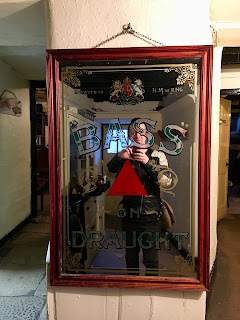 Next stop was Wareham, where there were two entries in the GBG though I'd not really considered either OR the town itself, apart from a moment on the Bournemouth bus the previous day when an old lady said Wareham had been ruined by 'young Londoners' but that wasn't the impression I got tonight!

After buying a few food supplies for when I got back to my hotel, I headed to what I thought was 'my furthest point from the railway station' but I actually got the order mixed up.   Still, pub one looked a nice one ........ 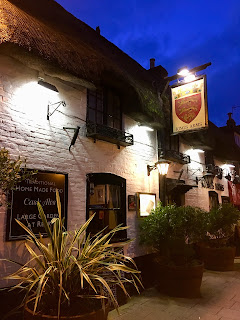 A second consecutive Kings Arms, and a third of the GBG complete.  I strode in with a more confident swagger than normal, I wanted to bask in the glory (the glory which no one here knew or cared about apart from me!) of my achievement.  I got a hand on the bar between some jolly ruddy faced oldies who'd obviously been in here most of the day.  'Oooh what shall I have?' I said, half to myself, as I often do.  "Arrrr, are you driving?"  they asked.  Well, that's a 'new' question!  'No' I confidently declared.  "Well get this American Pale Ale then, it's a strong 'un!", so I did, and because the pub was quite dark and the blockers were blocking, no idea what percentage it was, which is always the best way in such situations.  This was a gorgeous old pub, and it hugged you with those invisible pubby arms which is EXACTLY the feeling that was lacking back in Langton.  I sat by the roaring fire at the end of the pub, where a Scottish man was chewing the ear off this poor local chef.  Whether it was Quinine, Sala's plane or the British Legion, he had a Scottish twist on it, very much like the old guy in Goodness Gracious Me who says everything is Indian.  To my horror, he soon edged the focus of his conversation towards York.  I put my head down, if I admitted I was from York, I'd never get rid of him.  "Pubs in York don't let Territorial Army guys in" he claimed wildly, "....but when they found out I was 'Air Force', they let me in, some even bought me drinks!"  He was turning into Jay from the Inbetweeners now.  "I bought half a pig there once!" he said, warming to his special brand of bullshit.  "I was eating pork for years ..... but now I'm on the roast beef and Yorkshire puds.  It's great up there in York!  Black pudding too, great in Lancashire you know, but better in Scotland".  And like that, he downed his ale and disappeared into the night.  The chef puffed out his cheeks and rolled his yes, I told him I was from York but wasn't getting involved!  And we had a nice 5 minute chat about food in pubs needing to be pub grub and not restaurant food, before I took departed.  Classic, great ale too. 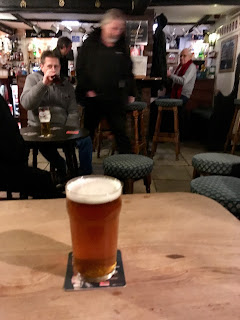 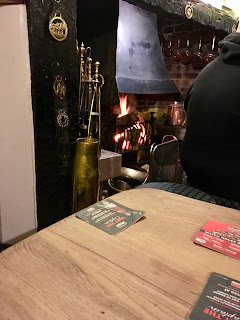 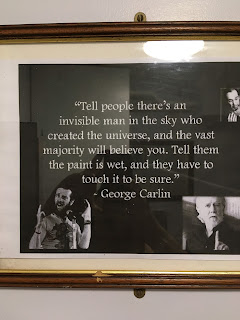 So one final push of the night and despite the strength of today's new pubs, I didn't have any expectations as I walked down the street and turned the corner to the Horse & Groom,  After all, I thought it was going to be a bit dining perhaps, newly refurbished, perhaps a bit soulless, but you just can never tell can you? 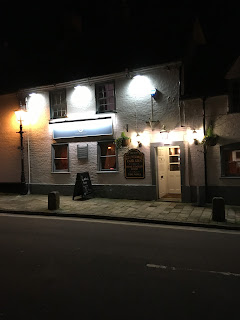 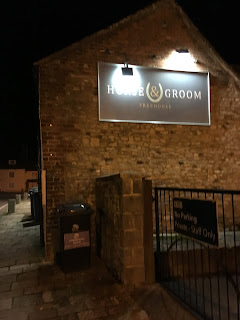 Shades of  the Duke of Cornwall in Weymouth, last October, in the way the locals at the bar took me under their wing from the moment I arrived, the most welcoming being Joel (of Dorset Life publication fame, no less, the editor) who grabbed me a stool and was sat to my left.  He had some intellectual chats with a kind young Welshman on the other side of me, enough to make my six pint addled brain spin in awe.  The barmaid was a brilliant bleached blonde lady with a dry sense of humour who did a lot of her talking through a series of nicely nuanced facial expressions, mainly happy to let the locals ramble on til their hearts are content.  And just when you thought it couldn't get any better, a bloke who had similar dress sense to me wheeled out a box of forgotten 70's vinyl, going through each record one by one, much to the chagrin of his patient young daughter.  "Daddy, I'm hungry!  Please can we go so I can have my tea?" she asked.  But it was in vain.  ABBA's rare blue-pressed Voulez-Vous waits for no man, nor starving daughter.  I was drinking some historic Dorset ale, that hadn't been brewed for a hundred years or something, but was making a come back, and by gum, it was good!  As was the 7% Coconut porter from Cerne Abbas I was allowed a try of, but no way I could drink a pint of this, even though I'm the guy who takes the Bounty chocolates out of the Celebrations at Christmas cos no bugger else wants them!  Even Martin the Owl made a brief cameo to say hello to the gang.  Dorset.  What a county.  Not since Tim Thomas and Sir Quinno (very much the Kylie Jenner and Khloe Kardashian of Berkshire) gave me a tour around their respective Newbury and Reading have people been so hospitable.  I staggered out into the cold night air in the general direction of the railway station with a smile on my face and nice warm glow!  Great end to what would prove to be my joint favourite day of the holiday. 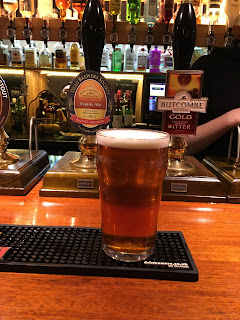 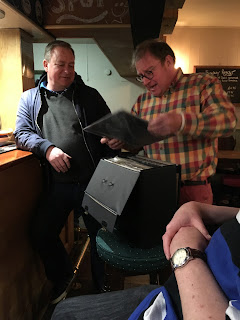 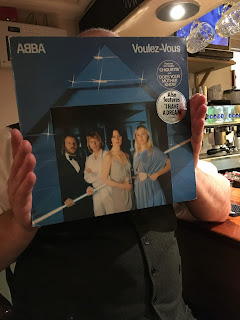 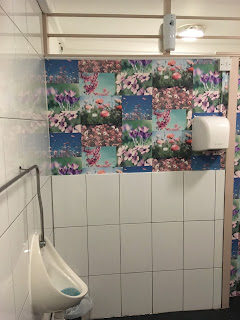 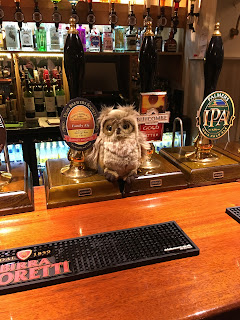 But no time to rest on my laurels, I had to be up quite early tomorrow for a long bus ride to this place called Chaldon Herring.  What could possibly go wrong?   Find out on Sunday.