BRAPA - Back in Dorset Part 2/10 : Passion of the Christchurch / Parley Vous Anglais?

So where was I?  (Actually a question I was constantly asking myself during this five day pub ticking jaunt down in the east of Dorset).  Ah yes, half way through day one, and a bit scarred by Six Nations and the Thomas Tripp, I headed across Christchurch where, with the light starting to fade,  I saw my 4th pub glowing from the other side of a seedy looking subway ............ 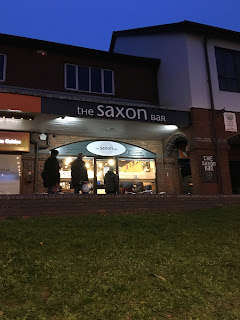 So, the first of many Micropubs of the holiday in the Bournemouthy area of Dorset, and I walked and stood in the middle of the room like a rabbit caught in the headlights, for it was one of those 'barless' places.  I looked around helplessly for someone to serve me, and just as I was losing all hope, a smiley young dude with a mass of hair showed me the beers listed on a blackboard up yonder.  I hovered awkwardly in the centre of the room as he brought my ale to me from one of those magical unseen kitchen areas with a sink, kettle and instant coffee and probably a pack of jaffa cakes, and charged me some southern amount.  It was quite busy in this early Saturday evening, at least not everyone was obsessed with Twugby in Christchurch.  Thankfully, a Scottish bloke who seemed to be the self designated 'friend of the people' was on hand to move along the bench and offer me a seat.  This was textbook Micropub, Mr Hillier would've been proud, for whilst micros give the impression this is common practice, the reality is 'make the stranger stand in the middle of the room and don't speak to them'.  The Scotsman was tickled I was from York.  "I refuse to go" he tells me with all due seriousness.  "It is still legal to kill a Scotsman with a crossbow from the City walls and I'm not risking it!" he tells me like he's got some Rushdie-esque fatwa on him.  Although he was more 'fat twat' than 'fatwa' (joking), he was a chatty bloke keen to talk whether key keg Titanic Plum Porter was acceptable.  I had no opinion, so he introduced me to two young lads and said how much he loved the 'bantz' (not his official term) and the silent one with the bum fluff moustache was a good bloke cos he lived up in the ultra rural North Dorset I'd be tackling on Wednesday, making out Sturminster Newton was a thriving meteropolis and the like.   I was glad of the chat and hospitality, it'd prove to be one of my more positive micro experiences this holiday.

A couple of stops down the line, I came to another 'outer' Bournemouth suburb called Pokesdown (I'm not making these up) and walked to an area called Southbourne, studiously crossing the road to avoid a Brewhouse & Kitchen, which I'm sure will make the Guide by 2020. 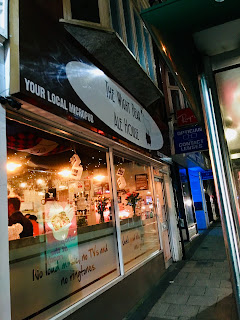 It was with a real sense of deja vu that I entered the second micropub of the night, little did I know they were part of the same 'chain' as the Saxon Bar, the lack of bar, me stood helplessly in the centre of the room, and exactly the same blackboard as the last pub - the Tiny Rebel Cwtch logo depressingly familiar!  The highlight was the staff, two very pleasant young bar ladies, who, according to the GBG, are 'knowledgeable bear beer handlers' and if I was less woke, I'd now make some sexist comment about how they could handle my bear anytime, but I won't cos I don't want to be the problematic toxic privileged white male elephant in the room.  They had a nice combination of awkwardness and sweetness, a bit like the stout/porter I ended up ordering.  Sadly, there was no friendly Scostman or quarter of bench to sit on, so I resorted to the ledge by the front of the pub with artificial flowers for company.  The pub seemed pretty anti-mobile phone, even for a micro, so I pretended I was admiring the decor n building, a few people smiled to remind me this wasn't central Bournemouth, but I was quite happy to get back out into the wet dark evening for the walk back to Pokesdown station.

Although the original plan had been to hop off again for my sixth and final pub at either Bournemouth or Lower Parkstone, I decided to give it a miss on the basis of stormy weather plus tiredness.  7 pubs tomorrow to get back on track?  Let us hope so .......

I woke on the Sunday, had slept for like 13 hours or something ridiculous, and being a Sunday, breakfast was heaving down at the Premier Inn.  Still, I stuck with it cos I'd pre-booked and also had to reserve a table, and was feeling fresh as a daisy ready for my first full day of the hols.

First stop, West Parley which was a bus ride up from Bournemouth through the Winton area which also had to Micropubs to tick off.   I hopped off the bus at the crossroads and was at the pub well before 11:30am opening time.  I lurked in the carpark where a couple were already waiting and an old man was sat in his car.

Well, blink and you'll miss it cos I only looked at my phone for a minute, when I looked back up, they'd all got themselves in this side entrance, 11:27am it was, but staff happy to welcome them in! 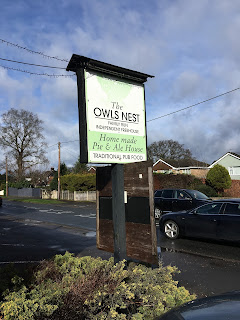 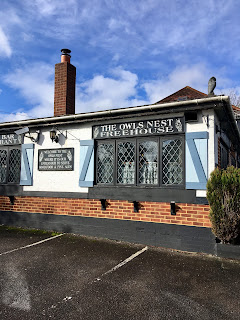 Owls (not real ones) were everywhere and poor Martin the Owl mascot was too terrified to leave my bag!  (Partly cos I was worried they'd think I'd stolen one of their many owls!)  But this was a classic, and underrated gem of my holiday, a low roofed cosy carpetted good old fashioned boozer.  The landlady greeted me in a very motherly way (it was almost 'suck Mummy's finger' for those of you who remember that Peep Show episode) and the Branscombe Best Bitter matched the pub, proper warming , old fashioned and reassuring.  I'd commend it most for managing to put drinkers first, when the Sunday lunch trade was obviously a big deal, for down the side of the bar, two younger staff members greeted the procession of old duffers who came in for lunch, making them very welcome.  Yet the whole bar area and centre of the pub was very much for the drinker.  I can't say I like sitting dead centre of a pub room as I don't feel as relaxed and inconspicuous, but in these circs, it had to be done.  A couple of jolly locals stood at the bar drinking, one a white rasta (possibly had an owl under his hat rather than a mass of dreadlocks) and he spoke briefly about a vegan coffee shop which made no sense unless it was a Bob Marley hidden track.  I'd recommend this pub to anyone visiting the area for any reason, you can't say fairer than that!

It was time to get back on that bus towards the Winton area of Bournemouth for pub two, I'll tell you about that and two others in part three tomorrow.