I was four pubs through my second day of the BRAPA Winter Festival 2019 in the lovely county of Dorset, though perhaps Bournemouth isn't the best representation of what the county has to offer.

After a great experience in the ultra traditional Cricketers, I next took a bus to another one of those labyrinthian suburbs, this one was called Westbourne, yawn, and after a short but painful ride when you need a wee, I was dumped on the side of a road and walked up a side street to, yes, you've guessed it, another micropub! 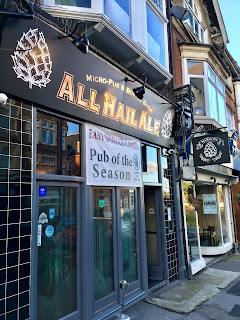 I was quite astonished to see the vast majority of the pub squashed at the back of the long thin room gathered around a TV showing the England Twugby match.  It seemed things were going well, and as I lean on the bar, a bloke turns around and says to me "AHAHAHA DID YOU JUST SEE THAT?  BRILLIANT!"  The blue haired barmaid noted my perplexed expression and like a Northern Stereotype, I felt immediately obliged to explain "I just don't get this Six Nations, I'm from up North".  I kind of half hated myself, half felt proud.  She politely laughed along, and I feel in different circumstances like at the Silverback, her and jolly hubbie were two staff I could've stuck around to chat to, got a real good vibe off 'em.  Of course, the bogs were next to the TV so I had to fight my way through the locals and two floor bound dogs (one a lively yapper, another a lolloping mess) to pee and prayed it'd be my only trip.  My ale was from something called Vibrant Forest, I think it is what the kids call Dank A.F.  As I wrote at the time "I could take this beer in a horse drawn carriage to Stockport and it still wouldn't have cleared by the time I arrived".  Now they're proper 'five pints in' tasting notes to all you trainee cicerones and sommeliers.   I sat as far away from the TV as possible on a side wall, where my two fellow rugby haters, a craft Ashley Barnes and a keg John Hartson were enjoying their ales a bit too much.  "Oooh ooh ooh, I'm gunna ask her for a taster of that one next!" says Hartson.  "Imagine, just IMAGINE having a nine percenter LOLZ" says Barnes a few minutes later.  Maybe the Twugby clamour wasn't so bad after all?!

Stupidly, I walked the wrong way to the bus stop (well, it wasn't opposite where I'd got off!) and I missed it.  Time to reflect, and just as well, for something was preying on my mind I'd not really thought about it that last micropub.

Yeh, how come so often they bang on about mobile phones being BANNED and electronic devices being evil and how "conversation is king .... let's bring it back (like how pubs USED to be)" making anyone who feels like having a quiet reflective pint alone, a read of the paper, or a phone call to a loved one, feel like some sort of anti-social misfit?  And yet, when it suits them, they are quite happy to break the 'Hillier blueprint rules' and wheel in a TV, get out a mobile and watch YouTube videos or play loud games on their phones with the locals?!  All things I've now experienced in recent months.   Doesn't such behaviour bring the rigid micropub concept into disrepute?

Yes, in my slightly fuzzy state waiting for that next bus, I conclude the novelty factor of the archetypal micro is on the wane, and Sober Si sat here today agrees with himself on that!  I still think taking on a disused old space and converting it into a 'pub' is a great idea, but why restrict yourself to the blueprint?  Recent visits to rural Lancs, the Wirral and East Yorkshire show me that you don't have to.  Why not create a more traditional pub environment?  Lay down some off-cuts of old Wetherspoons carpet, the gaudier the better.  Put in an extra toilet or two.  Here's a thought, one just for women, a couple of urinals for men.  If we have to go outside, so be it.  Get the cordials back on, lime AND blackcurrant.  As I say "pubs selling cordial are the most cordial" (you can nick that one, it is crap).   Let's limit handpumps to three, how about two guests but at least one beer we've definitely heard of like Joseph Holt Mild, Timmy Taylors or that thing with the red triangle.   Pop in a fruit machine.  Two screens, one showing 'At the Races', the other has 90's pop music videos.   And if you have to entice a couple of village elders to prop up the bar in sweat & piss stained cords and a tank top, then pay them in the beer.  Create an atmosphere, oh and please, put a bar in!

So, I nearly missed my next bus lost in all those crazy thoughts, but once back in Bournemouth, I took the train back towards my hotel in Poole, hopping off one stop before in this kind of suburb of Poole called Lower Parkstone, which had two GBG entries listed.  It was dark my now and my photography reflected my increasingly woozy state ..... 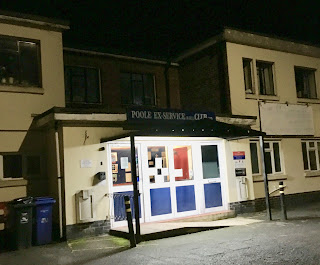 The GBG club entries eh?  It has been a while.  They always carry an extra sense of 'peril' you don't get from entering a pub.  'How to get in?' is often the most stressful part.  And then you have the reception you'll receive once inside.  I've had everything ranging from "CAMRA?  Your sort ain't welcome here anymore!" to "Hello luv, please sign our guest book, put 20p in the jar, help yerself to the buffet and come and tell us what brings you 'ere" since BRAPA began in April 2014.   I rattled the door gingerly, then realised there was a buzzer, so I buzzed, and was let in within seconds, I didn't even have to speak into any intercom device.  "You're too trusting, you could've been letting anyone in!" I said to the barmaid and the odd local dotted about the bar, as I wandered in, which got a few laughs, little did they know how serious I was.  Barmaid, with her impressively tattooed chest and bubbly positive nature was a pure delight, so I did a quick BRAPsplain and pretended I was interested in the local beer, ending up with some gorgeous shit from Wimborne.  One thing I couldn't forgive, Brewhouse  & Kitchen glassware but it was hard to find vault otherwise as I sat on the far bench seating by a smiling couple who said the word 'Sixpenny' which always makes me nervous in these parts.  I needed a poo, and thought it'd break my duck to have one in a GBG club for the first time, especially at work as "-POO" is our city code for Poole.  But it was a bit chilly n confusing, so instead I decided to channel my inner ex-serviceman and got my selection of fake moustaches out of my bag and went for 'rusty  brush'.  It wasn't a great beer strainer.  Good I can amuse myself when alone in pubs n clubs isn't it?  Could I leave in a demure manner?  Course not.  Having returned my glass, I shook the door, it didn't budge.  "YOU NEED TO PRESS THE BUTTON NEXT TO THE DOOR .... YEH THAT ONE!" they all screamed.  "Haha, should've known it wouldn't be easy!" I replied, leaving with hopefully a winning smile.

Feeling a bit worse for wear, I staggered back towards the centre of Lower Parkstone for my 7th and final pub of the night, it'd prove to be the drunkest I'd be all holiday so good to get it done early.  The pub loomed on the corner, looking a bit dangerous with a green glow as a ghoul hovered in the doorway, seeming to disappear as I approached ....... 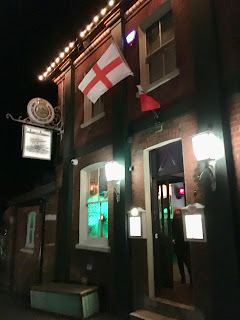 I guess if you are going to call your pub 'Bermuda Triangle', you have to be a little bit peculiar.  And yes, I know I was as pickled as a newt by this stage, but it was really hard to fathom what look, theme or identity this pub was going for, I spent the whole time feeling confused!  Late Sunday evening, you'd think the folk would be winding down thinking 'gotta be responsible, got work tomorrow' way but not a bit of it, party time seemed to be in full swing with booming music and a huge group of chatterers through this luminous green triangle into a lower side snug room.  It was the craziest BRAPA triangle I've seen since I was in Winnersh(!) and reminded me of those Quality Street my Mum likes.  Or is it Roses?  I can't remember.  A bored barman (too busy chatting to his mate to serve me properly) with a curious Twin Peaks look in his face served me an ale from Sixpenny, hurray, at last!  It seemed a fitting place to get one.  Maybe it was a rock club, a bit dark and sweaty in parts, but part of it felt 80's wine bar too.  Plenty of lone drinkers like me, all looking a lot more depressed than me, though Martin the Owl felt safer staying in my bag for this one.  Wish I'd paid more attention to a hidden staircase that led to a third level upstairs, but I suspect I may have gone missing forever.  Just as I prepared to leave, 'Who Wants to Live Forever' by Queen blasted out of the speakers, and those in the lower room sung it with such feeling, it was a bit sinister.  A strange one to end the night on! 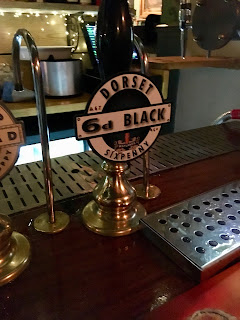 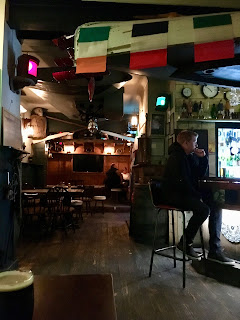 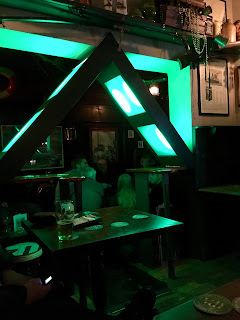 So, day two complete and I'd pulled it back to 12 pubs in 2 days.  I needed 6 tomorrow to keep apace, and a much needed change of scenery as I'd head out to the Isle of Purbeck.  Plenty of food and water before bed, there'd be no lie-in for me, straight back at it first thing!  Join me tomorrow for more mysterious pub tales from the BRAPA vaults.  Mwah hah hah!