BRAPA - Back in Dorset Part 1/10 : Poole-igans and Boot Boys


After the success of last October in west Dorset, I thought it'd be a good idea to start on the comparatively easier to navigate east of the county for my BRAPA 2019 Winter Special.  The aim was 30 pubs in five days.  Six pubs a day keep the doctor away, as they (I) say.

I had actually done three pubs in this area before, but none of them were currently in the Guide.  These were the Goat & Tricycle and Porterhouse in Bournemouth, and a strange Wetherspoons in Boscombe where a bloke asked me and Dad if buying socks for Christmas was a good idea.

I travelled down to Poole nice and early from York, a bit of a non-event of a journey until a little girl dropped an owl slipper at Winchester, which I returned to her grateful father.  Owl Unity and all that, I'd brought Martin the Owl mascot down with me for his first BRAPA holiday (more on him as the week progresses).

The bus replacement service from Southampton Airport Parkway to Bournemouth was 'fun'.  Staff sent us in every direction, a group of us got excited when a bus arrived with the sign 'bus replacement service' in the window.  'Are you going to Bournemouth?' we asked the driver.   He didn't know!  'How can you not know?' asked a lady next to me.  'I don't know' he replied.

We finally got on one.  "IF YOU AIN'T GUNNA BOURNEMOUTH, YOU GOTTA PROBLEM!" shouted the driver before adding "WELCOME TO THE MUPPET SHOW" as another bus blocked him in.  A lady got emotional, offered sweets around, demanded someone give her a phone charger cos her battery was low, then moaned about the traffic, and then nearly got into a fight with a lady who rightly told her to shut up.  "She's been an attention seeker from the moment we got on this bus" said the exasperated bloke next to me, unable to concentrate on his copy of the Economist.

Finally in Poole and rather frazzled like a cheap but gorgeous  bacon crisp, I still had an hour until I could check in at the Premier Inn so decided to do the two GBG pubs in Poole proper.  So much for Storm Eric, more like Storm Erectile Dysfunction, with winds of about 20mph and some nice sunshine, it was almost like being in the Caribbean, but obviously not.

I'd say a green bricked exterior is probably my favourite type of pub, and you don't get many, so I certainly entered with a positive attitude, and before I'd even been served, an old bloke in a group of diners says "arrrrr, careful mate, yer ticket is working its way out of yer back pocket" referring to a train ticket, the York-London leg to be precise, but so typical of the friendliness I experienced in Dorset last year, I pretended it was the most important ticket in the world (a Willy Wonka style tour to Sixpenny Handley or something) and thanked him most graciously.  "Put it in one of yer zip pockets, much safer there" he concluded, getting slightly carried away with his helpfulness.   A friendly barman served me some dark brown Jurassic beer, "extinctively refreshing'  it said (well, it was decent), and I sat at a huge table for 4 on my own cos it was all that was available, and with my luggage weighing me down like Marley's chains, I man-spread in a shameful way.   As you might expect from a Saturday lunchtime on the quay, it was full of blousy old folk eating fish, yet the pub still maintained the feeling of a 'pub' rather than restaurant or gastro hellhole, and you have got to commend that.  As potential lunchers continued to pour in and a shaky Dot Cotton scowled at me from afar, my conscience got the better of me, I drank up quickly and offered up my table to a couple who sounded like they were planning it eat but were having to perch at the bar, it's only fair. 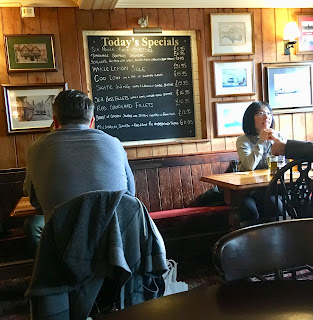 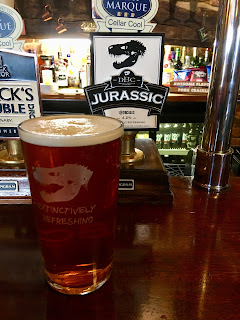 Because Google Maps hates me for not having a mind of my own, it played a joke on me next and for some inexplicable reason, sent me into the next pub round the back, where there was a pirate flag and a load of bored kitchen staff smoking outside.  "How the heck do I get in?" I wondered, before realising there was a perfectly normal front entrance on a main shopping street!

For all of the positives found at the Poole Arms, it was perhaps lacking the epitome of pub life, especially at this time on a Saturday.  But no such worries here at the Brewhouse, a place that straddled 'brilliance' and 'edgy' in a way that worked for the most part.  I sometimes fear the 'Good Beer Guide' protects you from the really 'real' pubs in the U.K. (feel I'm kept a bit too 'safe' sometimes) so always nice when you enter an environment of 'mild peril' where people stare and whisper behind tobacco stained hands and missing teeth.  I saw this place sold beers from 'Milk Street' but immediately, I realised my carefully rehearsed "are these ales vegan?" attempt at humour wouldn't go down well here.  Not a pub that has had to consider veganism I wouldn't have thought. It was a long thin building, not ideal carrying all my luggage, so I squashed in next to a bloke reading about crumpets and ordered a Christmas ale.  Everyone was vaping, so a misty fug made a trip to find the loos like being lost in a London pea-souper, especially as I had to negotiate pool players.  "Sheffield Unooooited have facked ap moi bet big toime!" screamed a guy dressed as The Year 1973 at the bar before slamming his fist on the bar.  The barman came over and put Six Nations on silent, tilting the TV towards me as if I'd be grateful, so I turned away in disgust and instead watched a bit of stained glass and wood panelling.  Great boozer this, felt like a real throwback to a different pubby age.

After checking in at my Premier Inn, I had a bit of scran and 40 winks and headed back out, this time getting a train out to Christchurch,  my furthest east point in the county where, like Poole, two pubs were listed in the Good Beer Guide.

Storm Eric was taking hold at last, winds picking up, the squally rain becoming heavier and the sky becoming darker as I approached the pub.  'Uh oh, Six Nations overload!' I thought as I saw the pub emblazoned with flags. 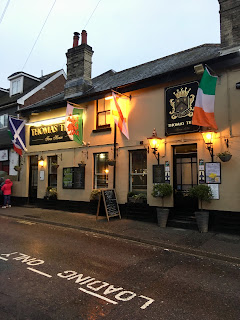 Well, it was a thriving hub of TV screens, staff wearing Twugby shirts, lots of lager and laughter.  As so often is the case, the ales on (4 of them) were consigned to a tiny side corner of the bar with a group of blokes stood in front of them.  As I tried to peer at them and say 'excuse me', their 'leader' muttered something along the lines of 'spread out a bit mate, it's a big bar with plenty of beers on!' but errrm no, I don't want a Carling so don't be a dick (I didn't say that out loud but these guys weren't even drinking ale!)  I wasn't mad for long, as to my right, three young ladies smiled before returning to their outdoor heated smoking area where there was lots of piles of wood doing nothing.  Maybe I should've joined them.  Oh well, swings and roundabouts and all that, I deliberately went to sit almost underneath the TV.  I got some strange looks like "are you mad, you won't be able to see the game from there?"  I assumed it must be England, but it was actually Wales v Italy, the pub were supporting Italy quite vehemently and let me ask you, what is worse than watching Rugby Union on TV?  Well, when the TV is surrounded by fake bookcase wallpaper of course!  Was this really Dorset?  I felt like I'd been hit by three giant characterless breezeblocks called 'Herts', 'Beds' n 'Bucks'.  Ok, so on the way out, people suddenly became all cheery and helpful, a man even stroked my back as he directed me to the loos, but I'm not sure it really left me with an overall positive impression.  I'm not even sure most people were THAT into the rugby, I think they just thought it was the 'thing to do' if you wanted to be 'seen' in Christchurch at this particularly time in history! 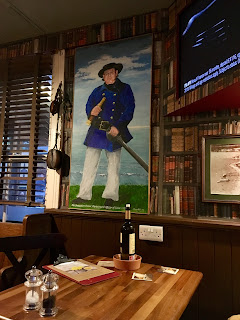 Time to head for the other Christchurch pub, and then I'd managed to get another one in before calling it a night.  More on the one tomorrow.