The two pubs I had planned for Friday morning both seemed to be on the fringes of the 'pretty village' of Worsley itself, so you could say they were 'loosely Worsley'.  Lucy Worsley is a quirky historian modern day legend.

You know, it really is tiresome to explain my amazingly clever blog titles, but I'm aware 'foreigners' might be reading so you'll just have to 'bear with' :)

Anyway, after a good 25 minute trek from Walkden station, I came to pub one.  I'd avoided the angriest leaf blower in West Manchester history, ignored Google Maps idea for me to walk straight through the centre of a roundabout, and as the church bell roughly tolled 11am (or was it noon?), I was in and ready for action ..... Greene King action.

I walked through the car park, past all the prosecco & burger offer signs, nodded to an old woman who was sweeping up outside, she squinted back through the surprisingly hot sun and inside into the kind of interior you could have predicted a mile off ..... 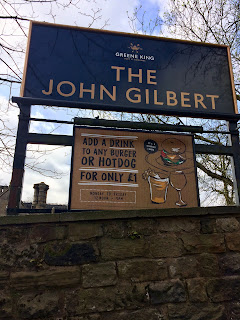 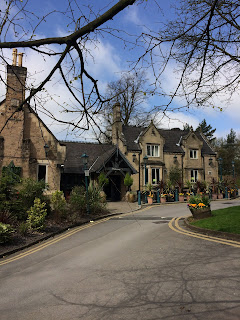 I said 'good morning' to the only other customer, a hunched over old man who had his flat cap next to his pint, and had attached his walking stick to the table.  If this was the Bell in Aldworth, he'd have fitted in perfectly and probably slagged off my hairstyle (as they like to do in said pub).  Sadly, this wasn't the Bell in Aldworth.  And he cut a forlorn figure and I wanted him to know he wasn't alone!  At the bar, the 'turgid' Greene King IPA was staring at me but despite the quick attentions of the botox lipped blonde and her Cowell-esque waistband, I recovered quickly enough to order a Prospect blah, which I know is local from past experience and good quality in here.  That and the hard working staff, rare redeeming features as I sat behind the old man, staring up at two empty birdcages amongst the dried flowers and assorted cushions.  Then Coldplay came on.   Should I go over and give the old man a hug?  I think I was struggling more than him, especially as ABBA came on next, and as we now know as a BRAPA fact, the older you get, the more you appreciate ABBA.  I later mooted this point at 11:30pm in a Punk Festival queue for the Zombie Shack.  No one quite believed it here, but they were all younger than me.  I realised I'd missed out on the CAMRA discount, a shame you might think.  I wondered how sexy it was to ask for a CAMRA discount.  'Phwoar' I could imagine the barmaid saying 'show me that flimsy grey card before it gets upgraded to the new blue one with the pointless circle logo'.  This pub made you lose yourself in odd thoughts, either that or your mind protects you from harrowing experiences.


Back from where I came, was the other Worsley pub.  And this one had an even more elaborate grandiose entrance, situated as it was, in the grounds of a country park with spa, golf course and gym.  Finally, a mock tudor frontage came into view and I knew exactly what sort of place this was .... 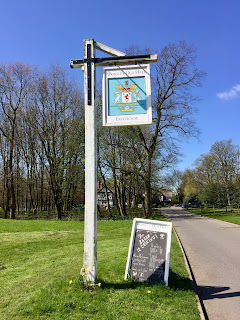 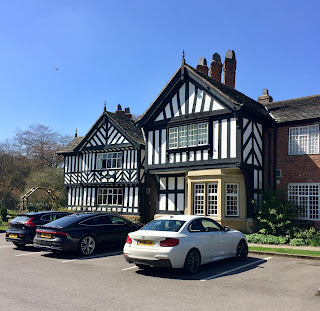 Yes, as Spinal Tap said in their Real Ale Pub remake, "turn the Brunning & Price up to 11".  Yes, it's been a while but rarely have I been in a Brunningier, or Pricier (not that it was too expensive) version of one of their pubs, many of which seem to be in the North West.  I have to say, it was hard not to be impressed walking in and in my 'Spoonsesque three quarter length shorts, I hoped I wasn't going to be thrown out for failing to adhere to a dress-code.  But I immediately felt more at home here, staff a bit more down to earth, I just felt 'comfortable'.  My ale was okay in that average way Brunning & Price ale is, and the toilets were so good, they had an armchair and you could conceivably sit in here and enjoy a pint - I don't think even I have EVER said that in a BRAPA pub review before.  The problem was, which ultimately spoiled the experience, "hell is other people", as M.Lawrenson told me less than 24 hours later when he channelled some dead French dude's spirit.  It started when I tried in vain to smile at a Mum with buggy trying to rock a baby (am I'm not even saying Twaby) to sleep.  But she was a total RBF.  A toddler (and I'm not even saying Twoddler) was in a high chair being fed by a patient Mum.  I tried to sit as equidistantly far away from them as possible in case they started bawling.  They both did.  Simultaneously.  Then to make matters worse, buggy lady moved to the seat RIGHT NEXT TO ME!  And bear in mind, this place was HUGE.  So I moved to the Rowley Birkin armchair area she'd vacated.  And felt better.  Well, apart from the endless stream of loud suits and plastic WAGs wanting prosecco and access to the outdoor barbecue.  You know what they say "freaks come out at night?"  Well, try "freaks come out in the sun".  The fact that the man I felt most affinity with came in, needless craning his neck to see beers on mini blackboards (a little Brunning & Price hallmark which is pointless) when he could have just looked at the pump clips, whilst wearing socks and sandals, said it all!

The next question was a good little test for my new GBG App, which has been struggling to convince.  "Where is the next nearest pub and could I get to it without going all the way back to Walkden?".

Well, fair play to the App, it seemed to think I could get to Wardley in just over 40 minutes if I bore right and crossed a few death defying roundabouts.

And all looked good walking through a place called Roe Green til I hit the A580 / M60.  Luckily I saw a bus heading the right way.  "Are you off to Wardley, or even Swinton?" I asked, but he claimed it was the opposite direction, and I should hop on, change buses, and go somewhere else!  So I said thanks but no thanks and soldiered on, hoping I'd get some good luck.

And I did!  I saw a pedestrian footpath and followed it's muddy trail through woodland, with a golf club on my left, and the crazy M60 directly on my right.  Madness.  Where would I come out?

Just then, my sister messaged me.  Her and her boyf were en route to the punk festival, and wanted to know what venue I was in.  So I had to admit I'd errrm, gone a little bit off piste!  My prayers were answered when the path came out at the A6 and an easy little underpass allowed me  just a short 5 minute walk to the Wardley pub, what a relief! 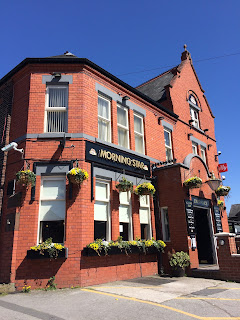 With a mass of people outside enjoying the sun, I marched in total buoyant as I thought I'd never make it here without a massive struggle.  Like all good sturdy Mancunian Joe Holt pubs of proper filth, I had a 'left' or 'right' doorway choice.  The left hand side said 'Vault', so because it is my new favourite name of any NW pub room, I chose this.  I was the only customer in, in fact all the action was either outside, or around the other side in the more lounge like room, but a glance in there told me there wasn't much in the way of spare seating so I stayed put.  A redoubtable old harridan served me a quality pint of Holt's Bitter.  Her softer faced colleague peered around the corner, they both seemed hot and bothered.  The Saddle Inn in Blackpool came to my mind when I took back a pint of vinegar Summer Lightning and they told me if I wasn't happy with the replacement, I could bloody well piss off.  No such problem here.  A Dad and daughter briefly appeared to look at some pub sports trophies and probably get a Fruit Shoot.  But otherwise, the scene was dominated by rolling Sky Sports News blathering on about Arsene Wenger.  I was suddenly craving a prawn sandwich (I'd left the snails and frogs legs in the hotel), and with the evil staff watching me like a hawk, it was fun to try and eat unnoticed.  Sure, the stonier faced one could see me chewing, but I just pretended I was really getting into the bitter!

The plan now was to carry on walking, and get to the Cock & Swine in Swinton, but surprisingly, Google Maps was flashing and reckoned it was 'closing soon'.  3pm to be precise,  It was 2:35pm.  I'd been so slow in the Morning Star, annoyed with myself.  Apparantly, even on a Friday, it closes 3-7.  GBG didn't say so, not sure WhatPub did either.  I couldda gone and had a look, but probably a blessing in disguise with Punk Fest starting at 4:30pm and people wondering where I was, so back to Manc I went, to tell them all about the ABBA theory, and vaguely plan a Saturday trip IF I was feeling up to it!