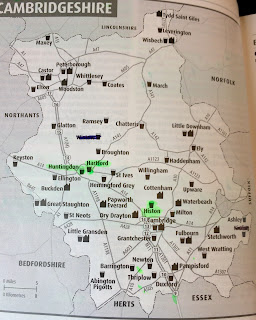 Reasons to be cheerful that I was about to start 'officially' pub ticking Cambridgeshire as the BRAPA challenge enters year 5?

How about, "it is NOT Buckinghamshire".  Will that do?

Joking, of course (I'm not), one of the main reasons is that #Pubman extraordinaire Martin Taylor resides in those Fenlands, and although I wasn't going to bother him on this first trip, the GBG's claims that the villages of Ashley and Kirtling had this magical regular bus service were pure horse tosh, and there was actually like, 4 buses a day.

I could've reacted badly, and chanted "you've got six fingers on each hand" at nothing in particular, but after double checking with RM, he kindly volunteered to drive me to Ashley.  What a gent!  Mudgie last week, RM this, what's next?  I'll get Brittany Spears driving me around the Burton upon Trent at this rate.

I reached Newmarket via Peterborough and Cambridge before 11:30am, and after a brief initiation ceremony from Martin where he sent me to a boarded up pub (presumably for shits and giggles), we soon sped off towards the well heeled yokel backwater of Ashley.

The half an hour or so spent in the car parked up from 11:33am-12:03pm waiting for the pub to open and chatting with Martin about Cambs GBG pubs, getting the local gen, and comparing notes and GBG ticks, was probably up there with my fave times during the day.  And no, that doesn't mean 'the pubs must've been shit then, lolz' so don't be so awful, my dear reader!

Incidentally, Kirtling was chalked off due to 'change of licensee'.  A GBG removal reason officially, so am within my rights, not usually enough for me to put a black line through it, but when it's a dead n alive dining hole (probably) in the middle of nowhere, it seemed the most expedient course of action.

12:03pm then, and out of the car, revelation time.  Martin wasn't coming in!  "I'll leave you to do your pub observation" he says, so I made one final demand , a BRAPA photo outside the pub ..... 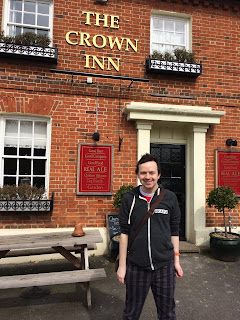 But before I'd even got inside, the luminous posh dog walkers who had almost tripped us up were berating two wellington boot clad walkers for using the pub car park .... "can you park on the street, this is for pub users only" they admonished in a haughty way which did themselves and the village of Ashley absolutely no credit at all.  Who made these ghouls the village police?  Martin was already across the street, and had missed the incident ..... if you squint, you can see him disappearing .....

I was pleasantly surprised to note that this was not the posh dining hellhole I'd wrongly assumed was the reason for Martin staying away, in fact I'd go as far as to say it would come under the category of 'above average'.  It was basic, had the loneliest pool table ever, and after some confusion about whether one of the two huge pub dogs was going to serve me, a chirpy woman appeared, and after some casual 'weather is improving chat', I sat down at a little armchair with upturned box for a table, and enjoyed a pint of some Mighty Oak southern filth.  However, I will remember the pub for two things.  Unfriendly locals and crisps.  At it's busiest, five locals were in.  Two old blokes, a middle aged couple, and a young lady.  Despite my smiling up at them from the centre of the room, all I got was eye contact avoidance, even when they were within about two feet of me.  This seemed to signify an inbred fear of outsiders.  Weirder still, 4 of the 5, plus the landlady, all tucked into these posh silver packeted crisps.  They were like the crack cocaine of Ashley, and I was just making a note in my phone about this endless crunching dominating the whole experience, when the husband (who looked most likely to smile) exclaimed to one of the old blokes "well if you are getting another bag, I certainly am!"  Obsessed.  I know these weren't boring brand crisps, but how nice can they be?  Had I tried buying a bag, I assume I'd have been chased across the village with pitchforks.


I relocated Martin, and we sped off towards pub two which was in Exning, where the Iceni tribe and Queen Boadicea supposedly used to hang, back in the day.

Although Exning is listed under Suffolk, this move made sense.  If you see the top map photo, Suffolk juts into Cambs like a twild hitching a ride, and Exning is pretty much located in the twild thumb, only just north of Newmarket.

"I'll join you for this one, it's a great pub" said Martin.  "They may even have Bass on" he added, as his eyes widened and his pupils turned into two red triangles.

Despite some pretty shonky parking from the locals giving the impression of people just a bit too desperate for their lunchtime pint, we wandered around the back of the pub and you could tell it was going to be quality before we even got inside ...... 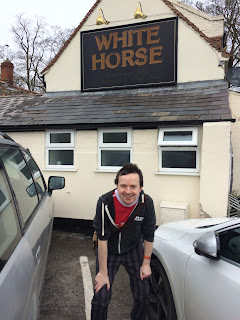 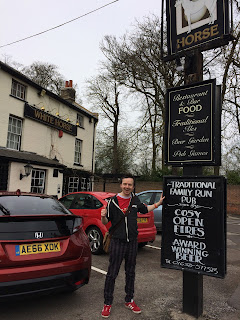 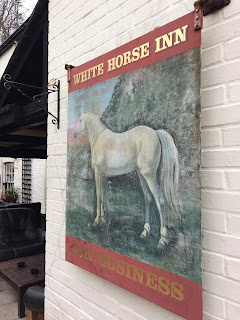 And inside, a wooden low beamed pub full of gurning plastic scousers pretending to enjoy the Merseyside derby made for a cracking atmosphere, even at this time of day.  A smiley enthusiastic pierced nosed barmaid greeted us and with Draught Bass (sadly) not available, we ordered our pints of London Pride (which started off by 'drinking well', but tailed off a bit), Martin even bought the round even though he was providing the taxi service as long as "you have the first one out of the barrel".  Top tactics from the #PubMan, using all his experience.  Seating was rather limited, and had we sat underneath the giant screen, we may have been chased out of the village with pitchforks (can you see a theme developing here?), so we had to perch on as close to a posing table as this pub got.  As Martin observed more weird pub chat than me, there was a brief moment of excitement as a local bloke wanted the menu on our table.  But instead of just taking it, he smiled manically, theatrically picked it up, and then smacked it aggressively on the table, gargled and hobbled off, which must be Suffolkian for 'can I borrow your menu please'.  So a bit of a weirdy, but a goodie, I'd recommend a visit!


Martin dropped me back off in Newmarket, and directed me to a pre & post-emptive 'Spoons which yo yo's in and out of the GBG (very much the West Brom of pubs), so made sense to do whilst I was here.  He had a brilliant pub town in the form of Bridport to get to, but we'd made plans to reconvene for more Cambs rural ticking next month so it didn't have to be an emotional farewell! 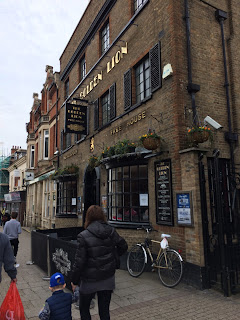 Although it'd later get a slagging from Ely's 'obviously superior' locals, I thought Newmarket had a nice feel to it, slightly reminiscent of Leighton Buzzard without the good pub and beer scene, I thought.  This 'Spoons was never going to leave me wide-eyed with wonder, but neither was it one of the mucky dreary snoozefests I normally encounter when Dad is present.  It was doing a bustling trade, and service was not at it's most 'zippy'.  The locals obviously had low expectations, as the middle aged lady to my left thanked the barman profusely when he asked what she wanted.  "Oh, you are 'open' to serve me, right now?" she asked.  Ugggh, this was going to take a while, did she know how pubs worked?  It made more sense when the full extent of her babbling order was reeled off.  How she remembered it all without having it written down, I don't know.  He did amazingly to keep up, and then repeated it back to her which took another 5 minutes.  "Oh, and another side salad" she added.  I hated her by now.  When a little baldie popped up on my right and simply barked "pint of Carlsberg", I wanted to hug him.  Then finally was my turn, I'd been stood there for what seemed like 10 mins, but was probably 3.  I ordered a gorgeous 'Flat White' (stout, not coffee, I felt the need to clarify after a bad Titanic Cappuccino experience in L**ds Stick & Twist once).  Then I sat down, drank it, and nothing happened for the next 20 minutes. 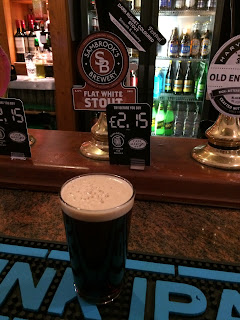 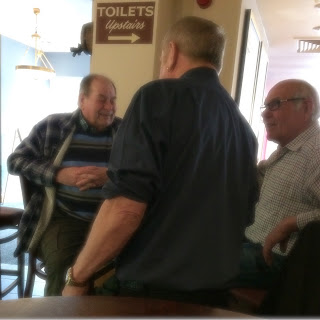 Disappointment was just around the corner, but I'll tell you about that in part two either tomorrow or Friday.