BRAPA - If the Twild is United (Sandbach to Winsford)

Cheshire loomed large for the umpteenth time in BRAPA history as I looked to chalk off a few more to bring us down into single figures.


The blog title is a nod to fellow pub bloggers Mackay and Beermat, who have managed punk efforts in recent weeks, and as someone who's going to Manchester Punk Festival on Thursday, it'd be an embarrassment if I didn't join in.  The title does make sense, but you'll have to read / scroll down to the middle.

Sandbach (pronounced Sandbatch, and not Sandback) is a lively if slightly irritating little town on a sunny spring morning, and nowhere near as far a trek from their anti-social railway Elworth station as I remember last year.  Back then, I was off to a Brunning & Price.  This time, it was a micropub.  Sandbach sure knows how to 'bring the fun'(!)  As I tried in vain to avoid leaflet giving Brexit campaigners on every corner of the market, and a woman who chased after me with a dud train ticket I'd dropped, it was a struggle to find somewhere to perch and eat my pasty.

11:59am found me stalking the pub from across the grottiest street in town, which smelt of arse. 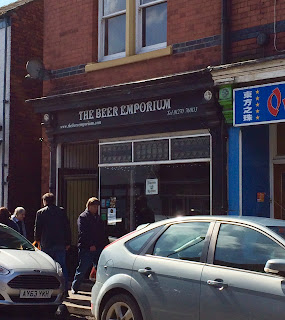 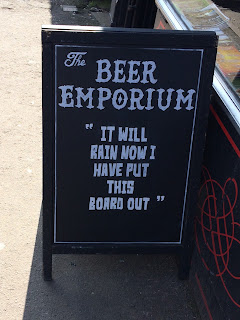 There was no doubt about the warmth of reception I was afforded by mine host, Liam/William/Ian, who in true 'first customer of the day in a micropub' asked me the ole' "style of beer" question.  When I ordered a pint of the brownest drabbest looking thing on offer like the honorary old man I am, it did not massively surprise me when this engaging bearded ginger dude told me he didn't drink pints, only halves or thirds, of the strongest beers he could see.  I did at least concede that this made sense from a bladder point of view on bus journeys, thinking about my coming day!   As in the Dog Inn in Burton, he told me my beer was at least "a good place to start" so I thought it expedient to explain BRAPA now so he didn't wonder why I wasn't staying for an alldayer.  He was a great guy despite the fast talking, and dealt with his only other 'customers' swiftly.  First was a local pie man who came in to ask him to sign something on a clipboard.  And then a joyless young couple came in and scanned the bottles (yes, it started life as a 'beer shop', how micro!) in silence for an age, finally buying two Salopians (beers, not livestock), grunting and leaving.  As this was BRAPA, something had to give.  And it was Liam's girlfriend's back!  Oh no!  Oh yes, a panicked phonecall, she was hyperventilating being unable to move, and he had to turn first aider, ring various parents (presumably ones he knew), in-laws and eventually his boss to try and restore calm to the situation, which he did expertly.  The various instalments from each phonecall kept my interest for a bit longer, until the bus was due, and I told him thanks so much for his hospitality, good luck with the back, and I left post-haste. 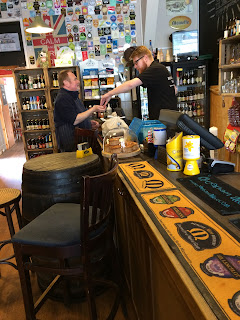 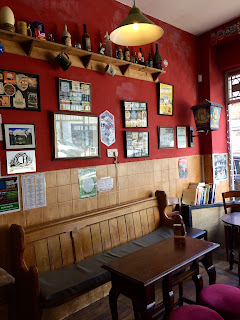 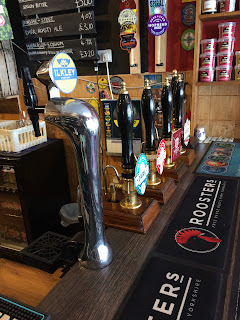 What followed was a sweltering bus ride at the top of a double decker to Winsford, a place I'd only been to once before for a pre-season friendly (Hull City lost 4-1, obvs) and all these years on, it retained that slightly Wild West feel.

I actually hopped off the bus early, when I saw the huge pub from across a car park of Blackpoolian vastness and misery.  But it was a Wetherspoons, hurrah!  I think.  (Well, Dad wasn't here to ruin it). 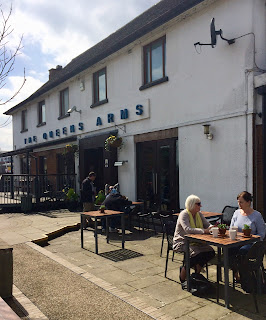 And sure enough, like flies round shit, the locals were using the first day of 2018 with any discernible warmth in the air to pretend they were in Torremolinos.  The scene was pure 'Spoons joy, tribal tattoos, surf n turf coming out of the kitchen quicker than you could blink, three quarter length shorts, crazy carpets, 18 year old chavs who don't know bar etiquette, tans belying the weather to date, all washed down with a mixture of Carling, Koppaberg and Strongbow Dark Fruits.  Say what you like about posing tables, I mean I don't approve of them any more than the next man (the 'next man' being Pub Curmudgeon in this case) but as a pub observer, they make me feel that little bit more king-like, looking down on my subjects!  I was disappointed though by one factor, as a friendly barman tried to engage a local into entering the Grand National Sweepstake.  He'd never heard to such a concept!  "Sweep Steak?  What IS THAT?" he ranted, like he was expecting a squeaky dog friend of sooty to be brought out carved on a plate.  Speaking of which, a girl with gravity defying eyebrows was cutting up her disabled grannies lunch, whilst on the other side, a young man brought his tiny mother to a posing table.  "I can't get up there!" she complained, and a bloke in denim shorts turned round and gave her a fireman's lift onto the stool.  This was glorious stuff.  And just when I thought it couldn't get any better, a claret and blue full kit wanker twild ran in with his dad, desperate for an emergency toilet stop.  And who did he support?  Scunthorpe Utd. I recognised that SUFC and Iron steely logo anywhere. They were away to Charlton!  It was 1:45pm.   I don't understand.  Then again, I don't understand anything about this weird and wonderful place. 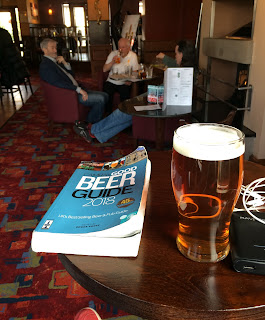 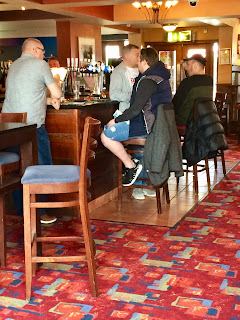 Because Winsford feels like one of those deliberately difficult places, it wasn't shocking to find they'd plonked my other required tick at the far end of town on the edge of a scary roundabout.

I should've mentioned back in Sandbach, our friendly hero of the day Liam recommended two 'pre-emptives' for me, one being the Red Lion in Winsford.  I trust him, and if I was starting a county like say Cambs, I'd take such advice on board, knowing full well I'd still be ticking this county in the next GBG.  But in the case of Cheshire, we are getting so close to the end, I can have it done by the time the new GBG comes out so pre-emptives aren't so priority at this stage, as I might not 'hit' Cheshire again until, say, the 2030's! 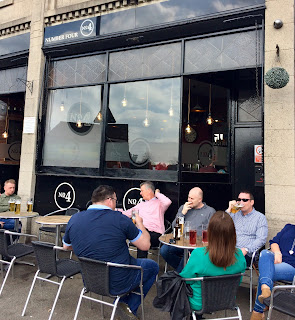 This part of the country seems to like it's Euro style bars more than most, I've realised. Some work, some don't.  It's life.  The weather was right for some continental style outdoor drinking, and the 'Chorlton Rejects' (possibly the worst punk band ever) were at least  creating a facade of pure enjoyment.  My stripey (albeit grey and black) trousers had been getting the odd glance all day, and it went up a notch here as two young lads by the door (one pictured far left) tried to find something amusing to say, but ran out of time, for I was in.  Four bar blockers, and I mean blockers, were guarding their territory, but edged outwards by 1%, to allow me the faintest sliver of real ale pump coverage, and they did the barman's job for him and asked the age old 'what ya after?' question.  As I saw one called 'Free Beer', I made the obvious joke "is it really free?" and despite hating myself inside, it went down reasonably well with all but the young barlad, a kind of 21st century Noel Gallagher who'd hopped in a Radox bath with Ian Huntly.  In the end, I went for a "Azacca" cos I wanted to say the word out loud.  I considered that decorating your fairly spartan bar with a few La Chouffe and Leffe empties doesn't necessarily mentally transport you to Brussels, and whether it was Winsford itself or what, this place didn't quite nail it like say North Bar in L**ds or that Cask place in Manchester does.  Any GBG entry with a number in it's name is viewed with suspicion on my part, so perhaps I was prejudiced before I went in, but my overall feeling was this place didn't quite 'fit' with Winsford. 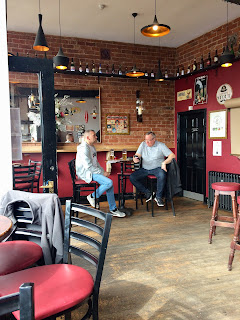 I really shouldn't have complained, three pubs done in fairly good time.  The day could easily go drastically wrong, but I'm sure you don't want to hear about that.

Oh you do?  Well, okay, join me next time to hear about the second half of the day and my misfortunes.