So, I was halfway through my Tuesday pub crawl before Hull City's probable embarrassing defeat at Burton Albion, the worst team in the division unless you count Sunderland which you shouldn't cos I need to go back there soon to catch a bus to somewhere else.

Despite only having had three pints, I was already swaying in the wind a bit as I headed to pub 4, snarling at the likes of Coopers and the Devonshire which people told me were great, but not in this year's GBG for change of ownership reasons - and I certainly had enough to do without thinking about 'pre-emptives'.

Anyway, my next pub was on a corner looking rather austere and self important, sadly I've lost my photo of it so instead, you'll have to make do with a tiny local man growing out of a pint of Bass .......

Despite the perceived austere self important outlook, this pub was perhaps the most ridiculous of the day.  I wandered in and a professional barmaid who had the face of someone who'd been born to serve in a pub eyed me watchfully, three locals did the same.  The beer range, unlike in the Dog Inn, steady (some might say 'old fashioned') and after ten seconds longer reflection than I'd have liked, I again plumped for the Draught Bass.  And unlike in the Dog, a look of respect shimmered briefly across the faces of the onlookers, who breathed again, and carried on their chat.  I was carrying a carrier bag with my food in, and it felt like the kind of pub where that was 'the right thing to do'.  As two young Hull City fans tried to look relaxed and a man kept looking over his paper at me, a loud lady joined the local blokes, lamenting on the fact that she spent so much time in the pub, she didn't feel she'd brought her kids up properly.  "Still" she concluded, "they are old enough now to look after themselves, so I may as well spend more time in the pub!"  This was EXACTLY WHY I'd come to Burton, to hear stuff like this.  Aware I was flagging already, I tucked into my horrid shop bought sandwich and mini cheeses without a second's thought despite being in full view of the bar, that's how proper down to earth this pub was.   You can't do that kind of thing at Old St and Angel.    Just then, my buddies Christine and Chris D walked in having escaped the S.S. (I said I'd be lurking here), I told them Bass was the thing to drink if they wanted to 'fit in' but Christine got a coffee as driving tonight, and told me Coopers was ace which was expected but still annoying.  Flippin' GBG trying to spoil my fun!  I liked this pub, a real grower, but it wouldn't be everyone's cuppa. 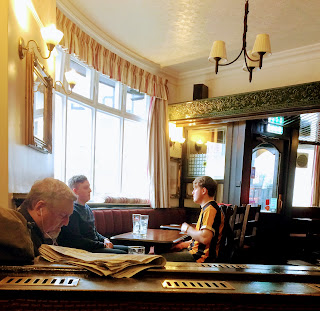 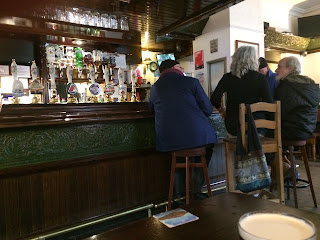 Just around the corner, we came to my penultimate pub before the match ....... So, as you can see, 'away fans are welcome' which was morale boosting but surely should go without saying in a friendly Staffs town like Burton.  Fair enough, these things don't go unsaid in knuckle-dragging holes like Stoke or dare I say the otherwise lovely Ipswich, but as we walked in, the full quota of S.S. (Southern Supporters) were already there meaning we had to hurdle them to get to the bar.  No wonder the two locals in the window wore a constant pained expression of  'outnumbered in our own local' throughout our time here.  The smiley blonde landlady had to be quite patient as we peered to see what beers were on and what we could have.  When we finally got sat down, I reminded myself "yes, we are in a micropub".  As my thoughts formed slowly, the atmosphere just went up a notch of the Hull City scale of infestation when Tom crashed through the door like a cross between Swampy and the Creature from the Ginger Lagoon.  Did he manage to get a Blackcurrant cordial?  I doubt it.  Christine put into words what my brain had been trying to think "This place is a bit dull really isn't it?"  Yes, it was, boring as fuck to be precise, but she wouldn't put it quite like that.  I'd been becoming something of a micro-lover after experiencing Tutbury's superb Cask & Pottle and Ely's vibrant Drayman's Son, but this was the other side of the coin.  Like all pub types (apart from Ember Inns OBVS), some micros are enjoyable, some aren't, and there was no reason why I'd like the others more than here, it's just how the complimentary doggie biscuit crumbles.

The others went in search of food, so me and Tom headed for our final pub, on the way up to the ground, and again, they felt the need to tell us 'away fans are welcome' so I posed like a hooligan, but not a Gooligan: 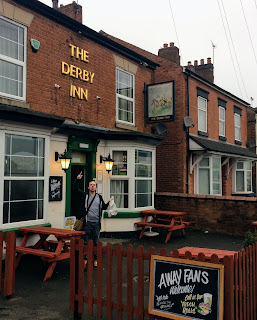 The Derby Inn was on Derby Road, one of those long busy main roads which only exist in wet murky weather in the counties of Staffs, Derbys and South Yorkshire.  You know the type.  Every other building is a lock-up garage, every person is an old man in a blue rain mac and half mast trousers, every dog is aggressive, and occasionally a  terrifying tattooed lady will shout at a twild called Jake to stop playing in the road.  The reason I tell you all this, is because inside, this pub was a total sanctuary.  Is it silly to say it was almost farmhouse-esque, as we entered to the left to this deliciously bare bar room with the friendliest, or at least most genuine, welcome of today.  In fact, when I went to the outdoor loo (outdoor loo = quality pub, always) three jokey members of staff all seemed to fight over each other to give me that "One True Path" to the bogs.  I've written in my notes "Mr Boring is going for a cheese & tomato topping".  I have no idea what this meant, but I expect it was funny at the time.  After a pint of something this time non-Bass, I took out what was left of my food and drink from my bag and sobered myself up pre-match.  This seemed to turn me into a doting dog waiting for it's owner, because Dad was finally close to arriving!!  Yeayyy.  He'd hot-footed it down from a pensioners lunch at Clayton-le-Moors 'as you do' and am sure Tom will testify to me constantly racing to the window and whimpering, every time a bloke in a blue rain mac walked past.  We had a half/pint/blackcurrant and then it was match time .... what a great pub to end on! 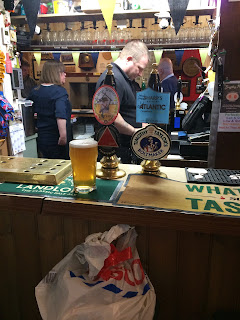 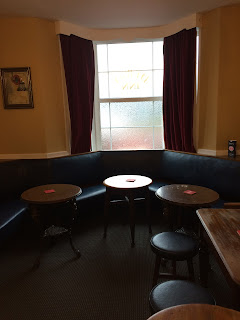 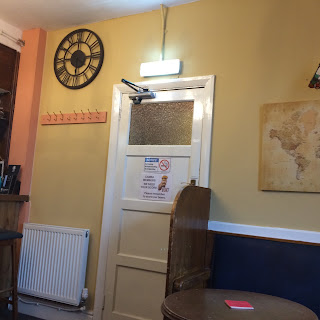 And then for the match, where something weird happened and Hull City won 5-0.  Wow, I didn't see that coming.  Safe to say, it was more Burton's ineptness than our genius, but a rare chance to stand on a terrace too, perfect end to a superb day out. 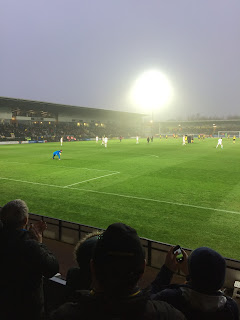 Turns out it was our club record away win since we won 5-0 at Glossop North End in 1915, in front of just 500 people cos they were all signing up to WW1 and it was kind of frowned upon to go and watch football unless you were old, a twild or a 'lady'.  Of course, the BRAPA man of his day was there, drinking a quality pint of OBB in the excellent Crown Inn but that's a tale for another day.

Getting home was a nightmare, poor Dad, nearly every road back north seemed to be closed but still, it justified me taking next day off work to sleep in til noon and recover!

I went to Cheshire at the weekend, it was annoying, and I'll tell you all about it next time.....