BRAPA - Getting Those Ely Feelies (Part 2/2)

So, the day was going well.  In a sense.  I suppose you could say that having the whole of Cambridgeshire's pub scene staring you in the face had been so intimidating, I'd spent most of the day lurking around Suffolk or a Wetherspoons of hidden depths!

It didn't get any easier once I got to Ely, a place I'd always been looking forward to because passing through on the train, it's one of those Knaresborough or Durham's which make you want to hop off and explore.

There were two ways of approaching it.  Either do the two Ely pubs first, and then get the 5pm bus out to Little Downham for the pub there, which would mean a taxi back.  OR get Little Downham done first by taxi, try and get a bus back, and then do the two Ely pubs.  I did the latter because there was a sunglassed Polish man with a proud hooter beckoning me into a taxi on arrival.

But disaster struck when I realised the Plough was closed before I'd even got out of the taxi, but so embarrassed I was, I still got out and told him to come back for me in 40 mins.  There was no bus.

The times on the window were clear : 12-2 and 6-11.  This is NOT what the GBG or WhatPub said.  I tried to peer in but all curtains were closed.  The ancient heavy inn sign creaked in the wind, it looked a lovely pub which didn't help! 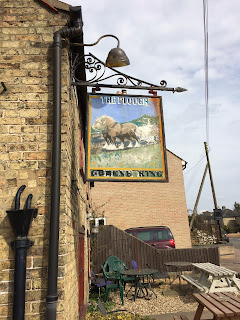 So, what to do for 40 minutes?  Well, a village walkaround made me realise what a quaint sleepy place this was.  At least it was a mild day for once, it could've been my first outdoor pint of the year, so I sat on the pub bench, tried to psyche out the pub into opening, and ate my snacks and drank my juice.

I only saw one person in 35 minutes.  A man walked across with two horses so I crossed the road to pat them and say hello.  "Are these the local grass cutters?" I asked, and he laughed a bit too heartily.  I told him my predicament, but he told me he was from March so didn't really have an opinion on anything, which seemed odd behaviour. 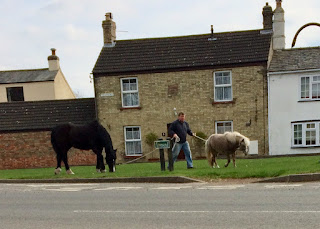 I returned to my bench, and Little Downham and the Plough continued to be as dead as dead can be.  It was a bit like having a seat ticket for a Mumford & Sons concert, and then realising you're sat next to Ray Wilkins, who offers you a breadstick.  With no dip.

My Polish buddy turned up after 35 mins which was good of him, so I confessed all as I obviously wasn't embroiled in pubby delights.

Back to Ely, I tried to make small talk about the scenery as we passed the Cathedral, but he told me he hated it cos he drove past it so many times every day.  Ouch.  I thought out loud and said "living in York, I sometimes take York Minster for granted so I can understand that!"  He glared at me with eyes which said "don't give me your cathedral empathy bullshit psychology" (or however you translate that into Polish).  I liked him.  He dropped me at an open pub, thank god. 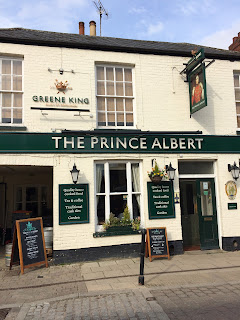 This pub had a cosy homely atmosphere from the outset, even if the locals looked very much like they bossed the place and practically lived here.  One ruddy faced bloke even seemed to be in his pyjamas.  After a hospitable welcome at the shallow bar, I was told about all these extra beers on this 'specials' board and how they'd do 'tasters' but after the last hour or two, I was like "not interested mate, gimme a pint, and gimme it quick" but I was sadly politer than that.  Why do people faff?  I love real ale, but jeez people get a bit precious, as any old man at the pissers in Rotherham Spoons would tell you, they all come out the same colour in the end, indicating his worryingly rusty wee wee trickling down into the trough, the sound of it almost Chucklebrothersian.  I sat to the right, and a nice healthy cross section of society came and went to and from the bar, so I played a little game of "guess what they are drinking".  Play along with me, I've captioned either their true order or what I guessed and got wrong.  3 are true, 2 are false:

With such excitement, I was a bit zoned out of the two characterful ladies across the bench from me and their conversation.  But as with so many conversations I try not to overhear and then end up relaying, it all became a bit too impossible.  They were friends of 16 years, and the bolshier one of the two was admonishing the quieter (but not quiet) one for holding back details of a man she was seeing on the sly:

Anyway, they must have seen my BRAPAesque faux awkward expression for they apologised for their brusqueness, but I told them at was what good pub chatter was all about and proceeded to bore them with BRAPA and gave them a card so hope you are both reading this ladies like you said!  They are off on holiday to Morpeth soon so I directed them to a micropub in the GBG and it was a nice chat, as they tried to work out what was the one trigger factor which made me start this crazy adventure.  Impossible to answer.  I said goodbye, was a nice chat, but I had a micropub to do. 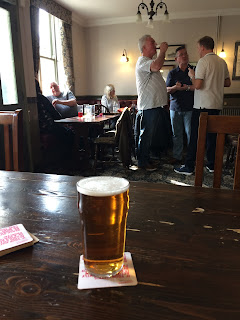 I got to walk past the Cathedral to get to this micropub, and a man who was either an intellectual Dad or a weekend teacher was asking some grassy twild what they thought about Queen Victoria.  "She gets cross very easily!" replied girl twild.  Queen Vic would have appreciated my view on the Twild problem, they should be seen and not heard, but not seen or heard in pubs.


I then rang Mum to boast that I'd got Hull City's 4-0 prediction spot on, but she claimed I'd said 3-0.  Good job I'm 25 points clear at the top of the prediction league or I'd be fuming.  In all the confusion, I walked straight past the pub, and when I did see it, a member of staff was doing some weird pose with a bucket just in time for my arrival:

It was heaving!  And no sooner had I got through the door when a guy sat near the door saw my hoodie and exclaimed "oooh BRAPA, I know you from Twitter!" and though I'd not heard of him and he admitted he didn't post much, I stopped to chat.  He was called Bert, his other half I can't remember her name, but a lovely young couple.  I fought my way up through the bar, where the guy in front had just ordered SIXTEEN drinks, ugggh.  Luckily, the locals had been reading that classic publication "How to be locals in a micropub and be kings of our own domain with our own brand of hilarious 21st century bantz".  They made me welcome with a series of weird comments and half jokes, and finally Mr Selfish Sixteen toddled off without even a trace of guilt and I was served by 3 people at once.  A full pint?  Not a half?  Not a third?  Not a little paddle tray of tasters?  Well that put the cat amongst the pigeons as I gave myself away as being from 'The North' immediately.  I looked up, all the locals had little knitted characters made of them, looking down on their real selves drinking.  This was slightly crazy voodoo.  Visitors were taking the knitted dolls off the shelves and asking locals "is this you?" to them.  But my beer wasn't presented to me immediately, oh no, it was so busy, they had a little ticket system going like when you get a Kebab down by the river near York's premier shitehole, the Lowther.  Where are you sat?  Well, stupid question, I'm not, so to get out of the way, I indicated in the direction of Bert and Mrs Bert.  I apologised for gatecrashing their cosy drinks, but they seemed genuinely happy to chat (I hope!) and eventually I was presented with this glorious local milk stout, bit sweet but udderly my pint of the day haha.   "We're actually working" said Bert non too convincingly, as work was judging micropubs in Ely, Cambridge and Peterborough against each other.  We had nice chats on things like Durham, GBG entries in Cowdenbeath v York, and other shit I can't remember.  But considering how busy this place was, with twilds playing on the stairs, a 'family feel' and very limited toilet options (obviously), I went away thinking this was one of the better micropubs I've been in. 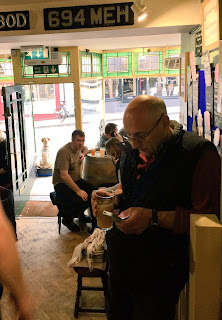 Bert and Mrs Bert (I should really call her Ernie, oh well too late now) walked me back to the station as they headed for something called Calverley's in Cambridge which is incidentally the FOURTH most pressing pub in my Cambridgeshire future.

After a few minor delays, I was in Peterborough with just enough time to spare for a quick half in the crazy but Oakham-tastic brewery tap.  But disaster struck for the second time this afternoon as it was 'ticket only' due to some Sue Ryder event!  Selfish Sue, selfish.  But seriously, ticket only, full huge pub, on a Saturday evening, however good the cause, no wonder Peterborough CAMRA have lost patience with it and binned it off.  Can't be the beer?  Can it??

So down the road to the next nearest decent pub I knew, the Bumble Inn.  Ironically, as I'd been slagging it off to Bert & Ernie who were trying to stay tight lipped on their pub award winners.  Problem with the sum of Peterborough + Micro, I think, is that Peterborough folk are weird.  Easier to avoid / accept in a chain pub where you can get into the bowels of the building and hide, but not in a tiny micro.  Dad and me had found it uncaring, moody and soulless.  You couldn't say that tonight, as the men-folk wanted to chat to me, but they either shook my hand too tight, smelt of raw meat and cigars, or I couldn't understand them, but it was all very well meaning I'm sure!  And I didn't have to drink Blue Cheese stout this time.

Anyway, that WAS quite a fearsome introduction to Cambs pub ticking.  Four ticks was disappointing, but I had a bonus Tuesday coming up to keep on track.  I won't get complacent, but see you back there next month for more rural delights, this time in the south west of the county, ooo arrr.