Even if Amanda Burton and Emelia Fox had both been on the Warrington - Liverpool Lime St train on Good Friday evening to perform an autopsy on a Widnes rugby fan, humility is not something they'd have found within the sorry corpse.

Yes, in true BRAPA style, I'd chosen exactly the WRONG moment to jump on a train west for some evening pub ticking.  32-18 was the final score to Warrington, but the Widnes fans acted like Grand Final winners, with a series of chants including the old classic "Warrington's a shithole, I wanna go home".  This didn't work mainly due to the three syllables in Warrington.  Oh, and it's lovely.

And I was in the Warrington section of the train, proud to fight for the home of my favourite Travelodge.  Their supporters were more mature anyway.  I could feel the 'Wire' in the blood.  Ha ha.  My counter-chant would have been "THREEEE GBG PUBS, YOU'LL NEVER SING THAT" but it might have just confused the hapless Widnesensians. 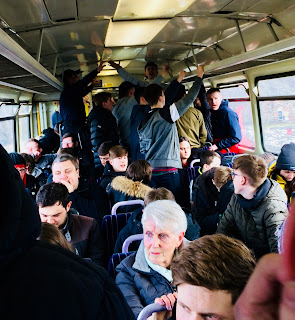 Anyway, calm came once the Widnes fans got off at their presumably beautiful town (I've never been) and me and the Warrington fans who live closer to Scouse-land chugged on in peace til I came to Mossley Hill.  This was the only of my six pubs today not requiring any sort of long walk.  What a relief. 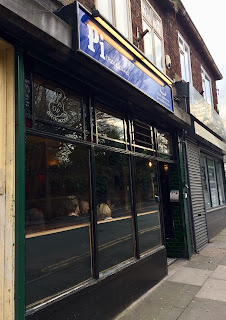 I've been to two pubs in this small chain before, one in Altrincham and one in Chorlton-cum-Hardy so for regular readers of my blog, you can perhaps imagine expectations were not too high on entering.  Almost all seats were taken, as the usual selection of 40-something poshos inhabited the space, and the usual death threat (to me, at least) came with the drinks order "would you like a bowl of complimentary peanuts?"  What is wrong with Frazzles, Wotsits or Bobby's Beef Grills is what I want to know.  What is that you say?  Not pretentious enough?  Their usual snooze brew Twatton Blande was on, but I managed to find a guest ale I enjoyed, and sat in my standard Pi position, on the left hand wall three tables back.  Uncanny knack of same position in each of my three Pi pubs.  There's nothing wrong with these little cafe bars, they're just boring A.F. and if all 4,500 entries were Pi's, I'd have ended it ages ago (BRAPA I mean, not my life ...... but then again??)  Anyway, I'm being cruel.  Like I say, on the surface, there's not much to dislike.  A few scouse middle agers smiled but as I highlighted the GBG entry, it seems expectations of the local CAMRA clan who voted this pub in is also low with lines like "real pies with sides".  WHATTT?   Jeez, this IS the North of England isn't it?  This place IS actually called Pi.  You don't expect much do you?  Ohhhh, they mean 'side orders'? like chips n shit ....  I hope.  Well, not shit.  Well, that's okay then (kind of). 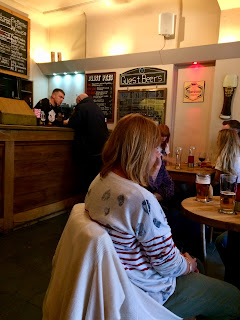 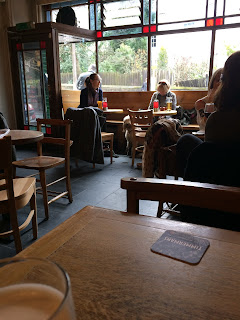 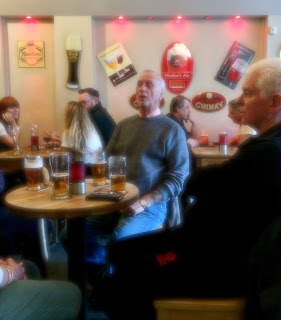 A few stops back down the line, and I came to Liverpool South Parkway, which I'd already visited a pub from earlier this year (the excellent Masonic at Garston).  You know you've crossed from Cheshire to Merseyside when the ankles become tanned and the trainers go faux gold-leaf: 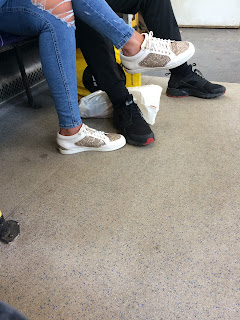 This pub was a bit further, but I needed to wash the Pi out of my system as I trekked to Woolton.  It was a pretty nice walk, but twisted ancient gnarly oak trees had their roots so deeply embedded into the pavement, it was a constant battle to save myself from tripping up.

Down a side street, I finally saw the pub.  But no sooner had I taken the outdoor photo and crossed the road when a stampede of floppy haired young men (not the Beatles) marched up the street and right into the pub at the same time as me.  It was like a zombie apocalypse, only more irritating.  "Shiiiiite, MUST get served first!" 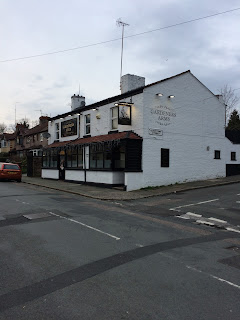 The first bar I reached was keg only, noooo, so I ploughed through to the cosier back bar full of locals only to find the zombie hoard swarming at the back of the room, handing their pennies to their leader (the one with facial hair) who bought something like 20 bottles of Corona (the only drink they knew existed, should have been Brains really HA HA HA).  Sorry.  Anyway, the locals eyed them with a mixture of fear, trepidation and loathing which I could relate to, and decided that as I'd arrived in unison with them, I had to look every inch my 38 years on this planet, and pretend I was "one of them" - perhaps I should have said my stock Scouse phrase "Why can't the government just admit that they got it wronggggg?" but probably good I didn't.  "I'm here at the wrong time", I said to a disgusted looking woman at the bar.  "School's obviously out for the summer!" was her reply, and then a jolly man told the barmaid it's a good job they didn't all pay separately.   After a bit more murmuring, it was generally agreed that "it's a good job they've pissed off into the other room" where they were now throwing beermats at each other and giggling.  Was my first time as a drinker in a pub like this?  Anyway, I was slightly regretting my ale choice.  The vaguest pub blackboard ever "Various Cask Ales Available" hadn't really helped in my moment of panic / being stymied by bar blockers, and I was now drinking beer from Cornwall rather than local microbreweries and felt bad for it!  Otherwise, I perched, said 'ow do' to anyone who came in, I tried to create an illusion of being someone they see drinking in here every Friday evening.  Really good local this.

I was surprised when I left to see that it was raining like mad, ugh!  So another long slippy walk back to Liverpool South Parkway, and I JUST made my train which was leaking water from the middle section creating an exciting waterfall feature that the twild population were fascinated by.

At Sankey for Penketh, I 'alighted' with some party goers and made another arduous trek as far down into Penketh as you could get without swimming!  My brain and legs were saying 'just go back to your Warrington Travelodge and rest, you've done more than enough' but my heart was saying 'this is a rare opportunity to get one of your most sought after Cheshire ticks' so I had to go!  Took ages to get there, eventually crossing two railway lines and a canal in the wet dark air, by which point I really thought the GBG compilers were taking the Michael.  But here we were ..... 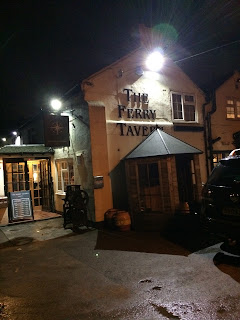 I'd started at a 'Ferry Boat' in Runcorn (seemed like days ago, never mind hours!) so a nice kind of symmetry to finish with a 'Ferry Tavern'.  Despite the hustle and bustle of a holiday Friday evening 9:02pm, you could feel the historic classy atmosphere of this place on entry.  As I squinted from under my sodden hat at the huge number of Salopian ales on offer and the well groomed barstaff, I wished they'd known the lengths I'd gone to to get here, and who were all these other customers, in their comfy cars with their designated drivers and friendly local taxi firms.  Baaarstards, the lot of them.  I love Salopian beers, so went for one I didn't know, called Mangata which am sure came out as 'Magenta' and then 'Mangina'!  The barmaid looked at me like 'what IS wrong with you?' but my eyes adjusted, and third time I got a bit nearer the correct pronunciation.  Despite having to breathe in past the people lining each and every wall, nook and cranny, I took my delicious black pint down three steps to the left and found a totally deserted mini room, almost a large snug.  I was amazed.  It was a delight.  My efforts to get here vindicated.  All I can put it down to is the old Fri/Sat night mentality of "if we sit down, it'll look like we're not having as much fun" mentality which I see so often.  I've never understood it myself.   Anyway, not complaining.  A white haired lady briefly invaded my room (GET OUT!) but just so she could hear the taxi company she was ringing.  I should've asked if I could get a lift back with them!  Eventually, a nice student girl walked in and smiled (she can stay!) but then her parents followed her in (get out, the lot of ya!) but Dad redeemed himself by imploring his daughter to watch every episode of Grange Hill from the very start, which seemed random, but he got excited recounting storylines involving Tucker Jenkins, Roly, Danny Kendall, Gonch Gardner etc.  She looked blankly at him.  I suddenly loved her Dad more.  And that summed up the pub, and the day, time for the long trek back to the station.  Great pub to end on.

I made the train, my legs were like jelly when I finally flopped onto my Warrington Travelodge bed but I needed to rest for tomorrow, I had plans in place, and pubs I just HAD to do.

Oh, and next time a Widnes fan gets cocky with you, ask them if they have a pub as good as the Lower Angel. I'd be intrigued.

See you soon for the first half of the Easter Saturday write up.